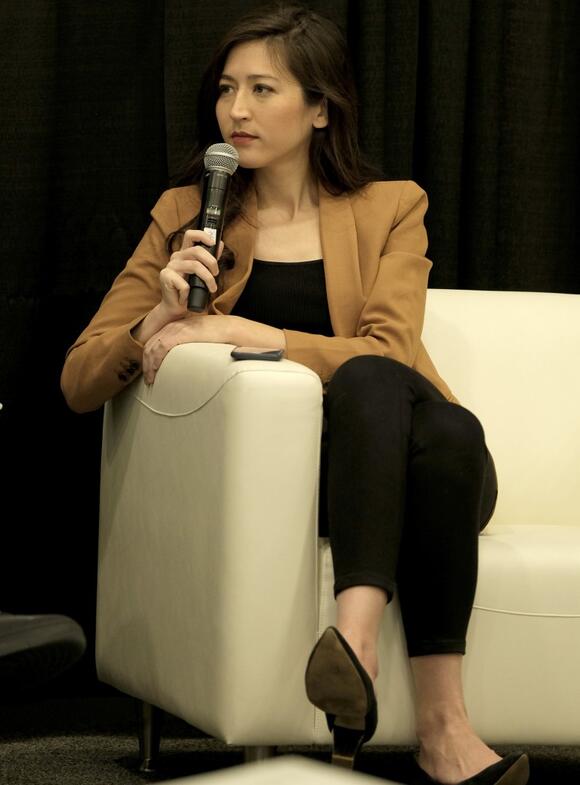 Mina Kimes jumped in response to a tweet from Defector writer Laura Wagner that she apparently believed was an attack on Jessica Smetana, a Meadowlark Media and DraftKings personality.

It’s all a bit complicated, so let’s back up and try to unpack things.

On Wednesday morning, DraftKings officially announced a new podcast with Mike Golic and Smetana — as previously reported in February by The Post’s Andrew Marchand — promising to cover the intersection of sports and pop culture.

Natalie Weiner, a former Bleacher Report writer, poked fun at DraftKings’ sales pitch for the podcast, with Wagner then chiming in : “Need some stoplights at this intersection.”

Wagner continued in a separate tweet, “One day i really really will write about the women in sports media who look around and crunch the numbers and reach the accurate conclusion that their success hinges largely on their willingness to play the hot girl who is also one of the guys.” 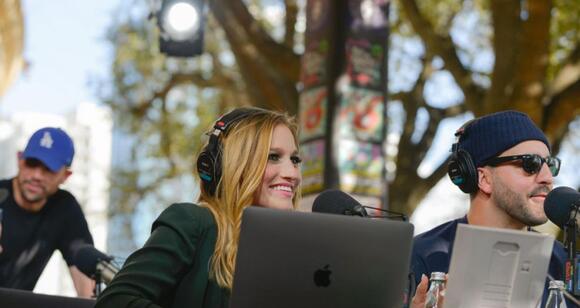 Kimes, an NFL analyst at ESPN who has long ties to the “Dan Le Batard Show,” appeared to take exception to this, presumably believing it was a shot at Smetana.

“How about women in sports media who s—t on other women over trivial things, for self righteous reasons?” Kimes wrote, to which Wagner then replied, “Not everything is about you but thanks for the epic own.”

Kimes then fired back, “I know it’s not about me. I saw who it was about, and I think youre acting like a bully.”

When Wagner responded, “I think you’re a little confused about who has the power here,” Kimes tweeted back: “Ah yes you’re really punching up at her…for doing absolutely nothing wrong. There are like 90000 things that are actually bad in sports media right now and this was the right battle to pick, for sure.”

Wagner then told Kimes that she “didn’t say anyone’s name or tweet at anyone,” and “What I’m describing is a feature of the sports media system, which you well know.” 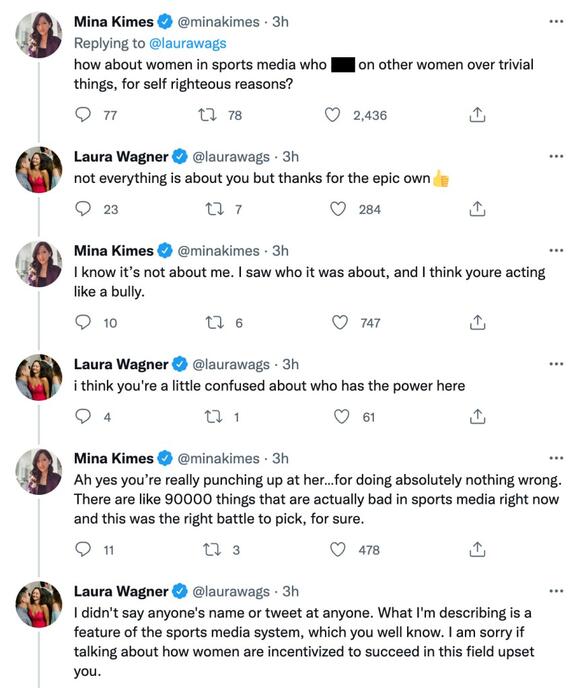 Kimes and Wagner went back and forth Wednesday on TwitterTwitter

“I am sorry if talking about how women are incentivized to succeed in this field upset you,” Wagner continued to Kimes, who said folks could likely connect the dots.

“Laura, I certainly understand the system you’re describing. But just because you subtweet people doesn’t mean anyone with a working brain and an ability to read your replies can’t see who you’re talking about,” Kimes penned.

Wagner then concluded to Kimes, “I’m talking about many people, and more importantly, a system. Hope this helps.”

Kate Fagan, who works for Le Batard and John Skipper’s Meadowlark Media, also tweeted at Wagner during her back-and-forth with Kimes, writing: “In the long run, I think the more productive thought here would be: hmmm, let me do some self-examination about why I sent out these bulls–t tweets to begin with.”

Christine Golic, the wife of Mike Golic, also jumped into the fray, tweeting , “Go Mina go!” with an accompanying gif of Elmo presiding over a bonfire.

Where this all goes from here is anyone’s guess.