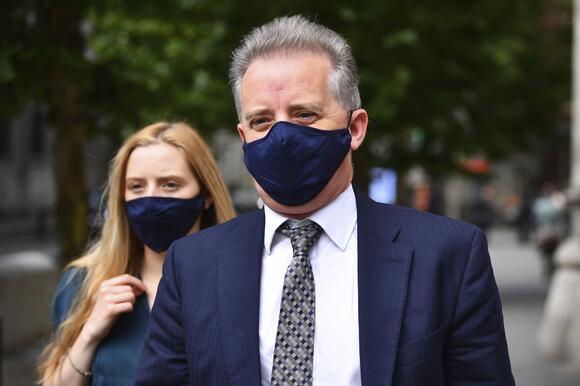 B ritish ex-spy Christopher Steele emphasized his defense of his discredited Democratic-funded dossier while contending he was surprised his salacious Trump-Russia collusion claims ended up being divisive.

Steele appeared for a talk at the Oxford Union on Friday, following an appearance as a Russia analyst on the BBC earlier this month, as special counsel John Durham continues his criminal investigation into the origins and conduct of the Trump-Russia investigation — including an indictment of Steele’s main source.

“What is being called the dossier was actually a series of single-source intelligence reports over a period of time, if you like, almost a running commentary on the election campaign and Russia’s perspective on it — and it comes from the Russian perspective of the telescope, if you like,” Steele claimed on Friday. “The sources were Russian, they were reporting on how Russia saw it, and of course, that may in some cases be rather different than how it was viewed in America at the other end of the telescope.”

The alleged main source for Steele’s discredited anti-Trump dossier was arrested in November.

Igor Danchenko, a Russian-born lawyer living in the United States, was charged “with five counts of making false statements to the FBI” that Durham said he made in 2017 about the sources used in providing information to Steele for his dossier.

FBI notes of a January 2017 interview with Danchenko showed he told the bureau he “did not know the origins” of some of Steele's claims and “did not recall” other dossier information. He told the FBI that Steele mischaracterized at least one of his Russian source contacts and noted that much of what he gave to Steele was “word of mouth and hearsay," adding that the most salacious allegations may have been made in “jest.”

Durham discovered Danchenko was investigated by the FBI as a possible “threat to national security." The FBI's "Crossfire Hurricane" team apparently became aware of this information by December 2016.

RUSSIAN OLIGARCH WHO STEELE WORKED FOR SAYS "WE NEED PEACE"

Steele repeatedly said last week there were “three” elements to the dossier, but he then listed four.

“One was there was a whole scale campaign to interfere in the U.S. election. [Secondly], that it was supported and funded by the Russian leadership, including Putin,” Steele said. “Thirdly, that it was designed primarily to assist Donald Trump and to damage Hillary Clinton rather than just to sow chaos in the American electorate. And fourthly, that there were elements of collusion between members of the Trump campaign and the Russians.”

The dossier’s biggest claim was that there was a “well-developed conspiracy of co-operation” between the Trump campaign and the Kremlin. Robert Mueller’s special counsel investigation “did not establish” any such criminal collusion. DOJ Inspector General Michael Horowitz said Danchenko “contradicted the allegations” of a well-developed conspiracy in Steele’s dossier.

Horowitz concluded that Steele's dossier played a "central and essential" role in the FBI's effort to obtain wiretap orders against Trump campaign associate Carter Page, and the DOJ watchdog criticized the bureau for at least 17 “significant errors and omissions,” including some related to the FBI’s reliance on Steele’s dossier.

Steele said Friday the dossier “was initially produced for a law firm that was connected with the Clinton campaign” and that “it was subsequently shared with the FBI and our own security services.” Clinton campaign general counsel Marc Elias hired Fusion GPS, which hired Steele, and Steele began to push dossier claims to the FBI in the summer of 2016.

“It was a divisive reaction. Something that we would have always considered in our careers in government to be bread and butter, consensus, national security territory — the interference of a hostile authoritarian state in your elections,” Steele claimed of the reaction to the dossier when it was published in 2017. “We never had any clue that it would become such a partisan, such a divisive, such a nonconformity issue over the years. It’s been extraordinary how it’s dragged on and is still actually dragging on now five years later.”

A 2019 book by the Fusion co-founders said Steele called fired FBI Director James Comey’s decision to reopen the Clinton email investigation in October 2016 “unconscionable” and “treasonous.” Steele suggested as recently as October that former Trump lawyer Michael Cohen may have committed “treason” when referencing a debunked dossier claim that Cohen had traveled to Prague in 2016 as part of a collusion scheme.

Horowitz’s report criticized Steele directly, noting that FBI meetings with Steele’s sources “raised significant questions about the reliability of the Steele election reporting,” and bureau officials said Steele “may have some judgment problems.”

The DOJ watchdog noted that during a September 2017 interview with the FBI, Steele described Trump as his “main opponent” and an FBI analyst said this was “clear bias.” DOJ official Bruce Ohr told the bureau that Steele was "desperate that Donald Trump not get elected and was passionate about him not being the U.S. President." Horowitz wrote, "The FBI was aware of the potential for political bias in the Steele election reporting from the outset of obtaining it.”

Washington Post Associate Editor Bob Woodward criticized the paper's coverage of the Steele Dossier and revealed that Washington Post reporters did not heed his warnings.
WASHINGTON STATE・1 DAY AGO
WashingtonExaminer

The debate over what to do about the debt limit is causing a rift within the GOP, one which former President Donald Trump believes he can use to his advantage with older voters and blunt the rise of burgeoning 2024 rival Gov. Ron DeSantis (R-FL).
FLORIDA STATE・2 DAYS AGO
Business Insider

McKay Coppins, a journalist at The Atlantic, said he was "taken aback" by how often he heard MAGA Republicans say they wish Trump was dead.
MICHIGAN STATE・2 DAYS AGO
RadarOnline

On Saturday Haley tweeted: "It's time for a new generation to lead."
SOUTH CAROLINA STATE・2 DAYS AGO
The Associated Press

CLAIM: House Republicans are requiring Rep. Jamie Raskin, a Democrat from Maryland, to remove the headwear he’s donned on the House floor while undergoing chemotherapy. AP’S ASSESSMENT: False. Republicans have made no such request and have in fact been nothing but supportive, a spokesperson for Raskin told The Associated Press.
MARYLAND STATE・1 DAY AGO
WashingtonExaminer

Stimulus update: Direct relief payments worth up to $1,000 to be sent out in one day

Essential Connecticut workers will receive a payment worth up to $1,000 on Wednesday.
CONNECTICUT STATE・2 DAYS AGO
WashingtonExaminer

The White House defended its failure to disclose an FBI search of President Joe Biden’s think tank in the weeks after the president’s attorneys found classified documents at the site.
WASHINGTON STATE・2 DAYS AGO
Victor

'Too hard for you guys to keep up with': Biden's infrastructure czar gets testy

President Joe Biden's infrastructure czar got testy with a reporter who questioned why the White House is promoting projects that will take 10 years to complete and how many Americans know about them.
NEW YORK CITY, NY・3 DAYS AGO
WashingtonExaminer

California taxpayers may get some extra love given to them in time for Valentine's Day thanks to the final wave of the state's Middle Class Tax Refund.
CALIFORNIA STATE・1 DAY AGO