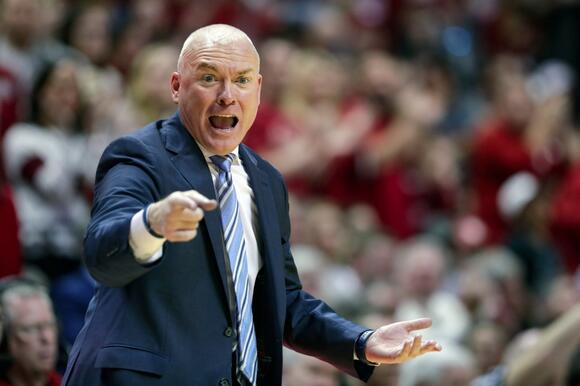 Chambers took over the Nittany Lions in 2011 and led Penn State to a 2018 NIT title. He resigned in October of 2020 after regrettably using a noose metaphor with former Nittany Lion Rasir Bolton.

Chambers admitted to using the phrase and apologized, but would step down as Penn State coach.

Get the latest local news, weather, and community events. Sign up for the WTAJ Newsletter.

He recorded a 148-150 record with Penn State. Chamber served as an assistant at La Salle this past year.

Chambers replaces Michael Fly who was let go earlier in the month.

The team announced Wednesday that he had died. He was 68-years-old.
PITTSBURGH, PA・10 HOURS AGO
WTAJ

Watch Punxsutawney Phil’s annual prediction live on February 2, at 7 a.m. here. PUNXSUTAWNEY, Pa. (WTAJ) — The town of Punxsutawney honored its last and furriest member of the Meteorologist Hall of Fame during an induction ceremony. The event was held on Wednesday, Feb. 1, at the Punxsutawney Weather Discovery Center downtown. There, members of […]
PUNXSUTAWNEY, PA・1 DAY AGO
WTAJ

How Groundhog Day transforms a quiet town into a spectacle

PUNXSUTAWNEY, Pa. (WTAJ) — Feb. 2 is Punxsutawney Phil’s big day and his town has the spotlight. Thousands will gather at Gobbler’s Knob in anticipation of Phil’s prognostication. Downtown Punxsutawney is quiet except on Groundhog Day. Now, the town is working to build around the holiday and its tradition with multi-day events. “There’s the groundhog […]
PUNXSUTAWNEY, PA・22 HOURS AGO
WTAJ

364 days: How Punxsutawney Phil keeps busy outside of Groundhog Day

PUNXSUTAWNEY, Pa. (WTAJ) — Just like each year, Punxsutawney Phil will make his prognostication for thousands of people at Gobbler’s Knob and on television screens across the nation. However, some may wonder what Phil does the other 364 days of the year. If you think Punxsy Phil is living his best life as a superstar just […]
PUNXSUTAWNEY, PA・2 DAYS AGO
WTAJ

PUNXSUTAWNEY, Pa. (WTAJ) — On Thursday, Feb. 2, 2023, thousands traveled to Gobbler’s Knob to hear Punxsutawney Phil make his prediction if winter is staying or if we’ll have an early spring. However, what couldn’t be shown are the countless stories of those at Gobbler’s Knob who saw it in person. “It’s a first-time experience. […]
PUNXSUTAWNEY, PA・1 HOUR AGO
WTAJ

PITTSBURGH (AP) — The Justice Department has been scrutinizing a controversial artificial intelligence tool used by a Pittsburgh-area child protective services agency following concerns that it could result in discrimination against families with disabilities, The Associated Press has learned. The interest from federal civil rights attorneys comes after an AP investigation revealed potential bias and transparency issues […]
PITTSBURGH, PA・1 DAY AGO
WTAJ

‘It’s in his blood 24/7:’ How Punxsutawney Phil prepares for Groundhog Day

PUNXSUTAWNEY, Pa. (WTAJ) — Every year on Groundhog Day, Prognosticator Punxsutawney Phil will either see his shadow or predict an early spring. However, what happens with the famous groundhog leading up to that moment and after? In the days before the main event, Phil keeps to his schedule. “It goes in phases. Groundhog Day is […]
PUNXSUTAWNEY, PA・1 DAY AGO
WTAJ

JOHNSTOWN, Pa. (WTAJ) — The Westmont Hilltop School District reopened after a threatening note forced it to close for several days. The school district announced the Junior-Senior High School would operate on a two-hour delay schedule on Thursday, Feb. 2 after it consulted with law enforcement and got authorization from the Board of School Directors. They […]
JOHNSTOWN, PA・6 HOURS AGO
WTAJ

Groundhog Day 2023: How to watch live from home

PUNXSUTAWNEY, Pa. (WTAJ) — The Punxsutawney Beta Sorority is holding a fundraiser featuring homemade goodies. The event takes place from 9 a.m. to 5 p.m. on February 1, at the Jefferson Street Social Hall across from the Punxsutawney Area Community Center. There is soup, sandwiches, hot dogs, beverages, and a big favorite: baked goods! “To […]
PUNXSUTAWNEY, PA・1 DAY AGO
WTAJ

JOHNSTOWN, Pa (WTAJ) — The Johnstown Police Department (JPD) in are getting a new upgraded vehicle following the deadly shooting on Jan. 23. State Rep. Frank Burns (D-Cambria) announced Wednesday that JPD will be receiving a $200,000 grant for them to purchase a mobile crime scene collection vehicle. Burns said this will help speed up […]
JOHNSTOWN, PA・1 DAY AGO
WTAJ

UPDATE: It has been reported that the child was found Wednesday morning and the alert has been canceled. JEFFERSON COUNTY, Pa. (WTAJ) — Police are searching for a missing endangered 1-year-old that was last seen in Punxsutawney. Adrienne Rand was last seen wearing a black onesie in the area of Sycamore Street in Punxsutawney Borough […]
PUNXSUTAWNEY, PA・1 DAY AGO