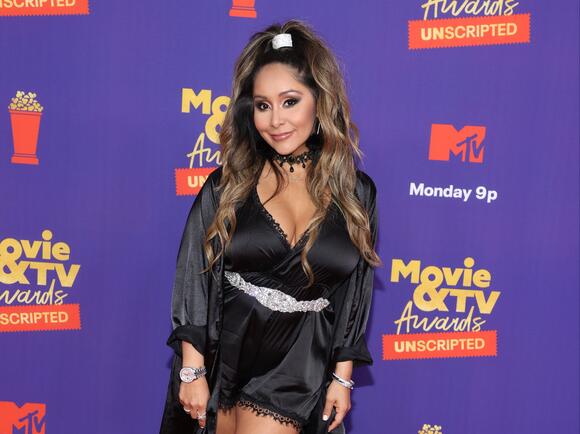 Jersey Shore star Nicole Polizzi has defended herself after a fan accused her of being a poor role model to her children.

Polizzi, who is known by her nickname Snooki, recently returned to reality TV for season five of Jersey Shore: Family Vacation . However, following the 10th episode of the season, which aired on 10 March, the 34 year old took to Twitter to discuss the “sh*tshow” of an episode and apologise to her fans for not live-tweeting, as she explained that she didn’t want her children to watch the show.

While many fans revealed that they’d loved the episode, as it reminded them of the original seasons of Jersey Shore , one individual questioned Polizzi’s “behaviour” in front of her children.

“So, Snooki, you don’t even take responsibility for your behaviour? You should have thought about it before! What a great model for your kids!” they wrote.

The tweet prompted a reply from Polizzi, who urged the man to “stop” before assuring him that she is a “wonderful mother”. The reality star then claimed that she is “allowed” to act like a “complete slob” when she is on vacation.

“Please stop. I’m a wonderful mother to [my] kids, and allowed to act like a complete slob on vacation with my best friends,” she wrote.

The response has since been liked more than 6,000 times, with many viewers also coming to Polizzi’s defence.

“Women aren’t just moms. We are many things outside of just being a mom. We deserve friends and fun… Let’s normalise being an amazing mom and also having time to ourselves to have fun. It’s normal & healthy,” one person wrote, while another said: “You absolutely deserve to have a life outside of being an amazing mommy. We all do! Keep being you and let the haters hate.”

Kim Kardashian’s son, Saint West, has sparked a debate about privacy, after he was seemingly spotted flipping off a fan who was filming him. In a recent video posted to TikTok, a user who goes by the name @sxchaz documented how he saw Saint in a hotel room in Paris. Over the weekend, Kardashian took a trip to France with the six-year-old and his siblings-North, nine, Chicago, four, and Psalm, three-whom she shares with ex husband Kanye West, for Paris Fashion Week.
CELEBRITIES・2 DAYS AGO
The Independent

Hilary Swank has revealed that she and her husband Philip Schneider will soon be parents to twins. The Million Dollar Baby star, 48, announced the news that she and Schneider are expanding their family by two during an appearance on Good Morning America on Wednesday. “I’m so happy to share...
CELEBRITIES・5 HOURS AGO
The Independent

Whoopi Goldberg has responded to a critique of her latest role in the new biopic, Till.The 66-year-old actor stars as Alma Carthan in the drama about the true story of 14-year-old Emmett Till and his mother’s fight for justice after his brutal murder by white men in 1955.During Monday’s (3 October) episode of The View, while speaking about the importance of her forthcoming film, which releases in cinemas on 14 October, Goldberg took a moment to address a since-redacted comment in a Daily Beast review.“I have to say something because there was a young lady who writes for one of...
CELEBRITIES・2 DAYS AGO

The Duchess of Sussex has discussed the stigmas faced by East Asian women in the latest episode of her Archetypes podcast. Following a brief hiatus due to the death of Quen Elizabeth II, the podcast returned with guest appearances from comedian Margaret Cho and journalist Lisa Ling. Meghan said that...
CELEBRITIES・1 DAY AGO
The Independent

A woman has sparked a debate after revealing how her husband reminds her to “tuck” her stomach in when taking photos.In a video posted to TikTok last month, Saira, @sairaayan__, shared a clip of her and her husband taking a picture together. “When you’re taking pictures and he reminds you to tuck in your stomach,” she wrote in text over the video.The footage featured Saira’s partner lightly tapping her stomach, prompting her to readjust her posture. The pair then looked at each other before Saira briefly touched her stomach and they both smiled at the camera. In the caption...
BEHIND VIRAL VIDEOS・1 DAY AGO
The Independent

BeyonceÌ has posted a congratulatory message to Solange for her work with the New York City Ballet.The singer shared two photos of her sister to her Instagram page and included a caption, which the star does not usually do.“Cranes In The Sky” singer Solange was commissioned to compose for Gianna Reisen’s Play Time for the New York City Ballet. She is the first African American woman to do so.“My beloved sister, there are no words to express the pride and admiration I have for you,” BeyonceÌ wrote on Instagram.“You are a visionary and one of one. Congratulations on being...
CELEBRITIES・2 DAYS AGO
The Independent

Fans of the royal family have been stunned by the “striking familial resemblance” between photographs of the Queen Mother as a child and her great-great granddaughter, Princess Charlotte of Wales.Pictures of the late Queen Mother from the archives of Glamis Castle in Scotland were revealed on the historic site’s Instagram and Twitter accounts on Monday (3 October).One photo shows the young Lady Elizabeth Bowes Lyon sitting against a stone wall in a wide brim hat and a white dress, while the second is a portrait of her holding a stalk with flowers.The castle’s social media team also posted a...
CELEBRITIES・1 DAY AGO

Kourtney Kardashian has revealed that her therapist advised her to date her now-husband, Blink-182 drummer Travis Barker. Looking back over their relationship, the reality star shared that she was initially hesitant about entering a romantic relationship with the musician, who had been a long-time friend. However, she says that a conversation with her therapist convinced her to give things a go, after she had initially turned down multiple invites to go out. One of the points that made her change her mind was the suggestion by her therapist that the 46-year-old "sounds like a good dad."Sign up for our newsletters. Read More Sue Barker wishes her A Question of Sport departure was ‘handled better’ by BBCZookeepers protect storks and cranes from Hurricane Ian by housing them in bathroomsHilary Swank announces she is pregnant with twins
CELEBRITIES・3 HOURS AGO
The Independent

Tom Felton remembered provoking the famous ire of Alan Rickman on the set of the Harry Potter movies.The Draco Malfoy actor gave the anecdote in a new promotional video posted on social media ahead of the release of his upcoming memoir, Beyond the Wand: The Magic and Mayhem of Growing Up a Wizard.“Eventually, I was told in no uncertain terms by Alan Rickman: ‘Don’t step on my f***ing cloak’,” Felton recalled of the late actor who played Professor Severus Snape across the film saga.“[I] sort of giggled, death eaters and I looked at each other and thought, ‘Is he...
CELEBRITIES・2 HOURS AGO
The Independent

House of the Dragon star Olivia Cooke has candidly revealed that she experienced a "full mental breakdown" six years ago.The actress, who stars Alicent Hightower, the daughter of King Viserys I Targaryen’s righthand man in the Game of Thrones prequel, told The Guardian about her past mental health struggles. “It was bad, bad. Awful, actually... I was working all the way through. I was very good at hiding it," Ms Cooke said.Click here to sign up to our newsletters.
MENTAL HEALTH・1 DAY AGO
The Independent

Khloe Kardashian has urged Kanye West to “stop tearing” her sister Kim Kardashian “down,” after he slammed the Kardashian family in a recent social media post. In Instagram post shared on Wednesday, the 45-year-old rapper addressed some of the widespread backlash he has received from celebrities for his Yeezy fashion show in Paris on Monday. Specifically, many took issue with West, a group of models, and conservative figure Candace Owens wearing shirts emblazoned with the phrase “White Lives Matter.”West’s response to the critics was that “public figures” didn’t “chime in” when he was allegedly kept from “seeing [his]...
CELEBRITIES・2 HOURS AGO

Rust will resume production after a settlement was reached with the estate of Halyna Hutchins, who was killed on set.The western film’s production was shut down after cinematographer Hutchins was shot and killed on the film’s set on 21 October 2021 in New Mexico.Alec Baldwin, the film’s lead star, was the one who was holding the gun when it discharged. The weapon is believed to have been loaded with dummy rounds instead of gunpowder and a projectile.The bullet hit Hutchins, as well as the shoulder of the film’s director, Joel Souza. According to onlookers, a horrified Baldwin repeatedly yelled:...
PUBLIC SAFETY・58 MINUTES AGO
BuzzFeed

"A lot of times what he means is misconstrued."
CELEBRITIES・3 MINUTES AGO
The Independent

Mel C has claimed the Spice Girls are trying to get Victoria Beckham to return for a reunion.The former pop star - who is married to David Beckham - was notably absent from the 2019 tour, but the band hasn’t lost hope of a potential reunion with her.“We don’t see each other as much as we’d like... but we stay in touch and we’re always talking about opportunities to get everyone back onstage together,” Mel C said.Click here to sign up for our newsletters.
CELEBRITIES・3 HOURS AGO
The Independent

Ellie Goulding has revealed she has ditched ballads on her upcoming record because she believes no one is “into them” post-pandemic.The artist has noticed a shift in people’s music taste following Covid-19, with many now preferring upbeat dance tunes.“No one seems to be into ballads at the moment, post-pandemic,” Goulding said as she attended the BMI London Awards at The Savoy this week.“People want to make music to move to, that’s what my new album sounds like.”Click here to sign up for our newsletters. Read More Miles Teller jokes about Tom Cruise and Top Gun: Maverick on SNLMel C says Spice Girls are trying to get Victoria Beckham to return for reunionFrench actors cut hair in solidarity with Iranian women
THEATER & DANCE・3 HOURS AGO