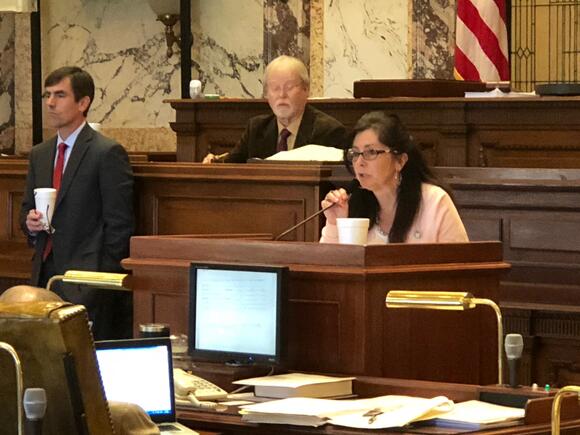 Listen to more episodes of The Other Side here.

We want to hear from you!

Central to our mission at Mississippi Today is inspiring civic engagement. We think critically about how we can foster healthy dialogue between people who think differently about government and politics. We believe that conversation — raw, earnest talking and listening to better understand each other — is vital to the future of Mississippi. We encourage you to engage with us and each other on our social media accounts, email our reporters directly or leave a comment for our editor by clicking the button below.

Republish our articles for free, online or in print, under a Creative Commons license.

Adam Ganucheau, as Mississippi Today's editor-in-chief, oversees the newsroom and works with the editorial team to fulfill our mission of producing high-quality journalism in the public interest. Adam has covered politics and state government for Mississippi Today since February 2016. A native of Hazlehurst, Adam has worked as a staff reporter for AL.com, The Birmingham News and The Clarion-Ledger and his work has appeared in The New York Times, The Washington Post and Atlanta Journal-Constitution. Adam earned his bachelor’s in journalism from the University of Mississippi.

Geoff Pender serves as senior political reporter, working closely with Mississippi Today leadership on editorial strategy and investigations. Pender brings 30 years of political and government reporting experience to Mississippi Today. He was political and investigative editor at the Clarion Ledger, where he also penned a popular political column. He previously served as an investigative reporter and political editor at the Sun Herald, where he was a member of the Pulitzer Prize-winning team for Hurricane Katrina coverage. Originally from Florence, Mississippi, Pender is a journalism graduate of the University of Southern Mississippi and has received numerous awards throughout his career for reporting, columns and freedom of information efforts.

Read this on the web

‘We have not seen any reason to adjust our own nuclear posture,’ says press secretary
POTUS・19 MINUTES AGO
Mississippi Today

Cleveland superintendent steps down, but remains in district

NEW ORLEANS – A panel of federal judges appears willing to overturn the court-ordered remedial plan and monitor overseeing Mississippi’s mental health system, their questions during oral arguments on Wednesday suggested. The judges also asked the parties in the state’s mental health lawsuit to explain whether the Department...
MISSISSIPPI STATE・1 DAY AGO
Mississippi Today

Mississippi babies are likelier to die before their first birthday than infants anywhere else in the country, according to data released by the Centers for Disease Control and Prevention on Thursday. The state had an infant mortality rate of 8.12 per 1,000 live births, well above the national average of...
MISSISSIPPI STATE・7 DAYS AGO
Mississippi Today

A state education board wants lawmakers to take a different approach to financial aid programs intended to tackle Mississippi’s growing nursing shortage. Earlier this year, lawmakers created the Nursing and Respiratory Therapy Education Incentive Program, which would provide nurses with money for college if they agree to work in Mississippi for five years after they graduate. If a nurse reneged on the deal, they’d have to pay the money back with interest.
MISSISSIPPI STATE・15 DAYS AGO
Mississippi Today

Tougaloo to receive $420,000 for security and mental health care in wake of HBCU bomb threats

Tougaloo College will get nearly half a million dollars from the federal government to shore-up campus security and mental health care in the wake of this year’s nationwide bomb threats targeting historically Black colleges and universities. The funding will come from a U.S. Department of Education initiative called Project...
COLLEGES・11 DAYS AGO
KCBS News Radio

President Joe Biden announced Thursday that he’s offering pardons to people in the United States who are convicted of simple marijuana possession at the federal level, and called on states to take similar actions for people convicted under state law.
CALIFORNIA STATE・19 MINUTES AGO

Chapel Hill is in a pickle over parks and rec spending. Now AOC is paying attention

While the Department of Mental Health works to expand community-based mental health services for Mississippians, the state Attorney General’s Office continues to fight oversight of that effort. State attorneys filed an objection to the most recent report by the court-appointed monitor reviewing the department’s progress toward reducing unnecessary hospitalizations...
MISSISSIPPI STATE・9 DAYS AGO
Mississippi Today

Roughly 400 people gathered on campus Monday to discuss the qualities they want to see in USM's next president. The post IHL board president calls presidential search at USM a ‘sacred’ responsibility  appeared first on Mississippi Today.
HATTIESBURG, MS・3 DAYS AGO