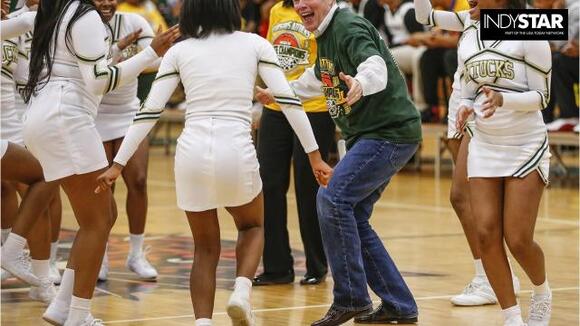 Elijah "EJ" Hunter lost his grandmother and namesake uncle within a few months of each other in 2020.

His mother, Alexis Washington, worried that her quiet, thoughtful 16-year-old would have no one to turn to about how he felt.

"Joe was there," Washington said.

At his grandmother's funeral, an unlikely speaker stepped before the crowd: Mayor Joe Hogsett. Or, as EJ calls him, "Big Bro."

"He was always there to make me feel better," EJ said.

The relationship took time to build. EJ is a pensive young man of few, but impactful, words. EJ describes Joe as fun to be around, not unlike his sometimes silly public persona (The mayor is known to bust the occasional — often off-rhythm — move during public appearances).

Hogsett and EJ met up at WISH Park on the northwest side last week to tell IndyStar how they met and why they believe mentoring is important.

They may seem an unlikely duo — Hogsett is a career politician in his 60s and EJ is an honor roll student and member of the Pike High School varsity football team. But EJ's mother said they just click.

"You know how to connect to me well even though I'm way younger," EJ said to Hogsett.

In 2019, Hogsett signed up as a Big through Big Brothers Big Sisters of Central Indiana after the organization asked him to participate in a press conference pleading for mentors.

Hogsett said it felt strange to promote the program having never participated himself, so he went for it.

"When I became a mentor, I was very worried about the commitment of time that I would not perhaps be able to satisfy just because of the nature of my job," Hogsett said.

But it's actually harder to get on EJ's calendar, Hogsett said, especially during football season.

There was no reluctance from Washington when she heard Hogsett would be her son's mentor. She knew of him from his community involvement, particularly at Pilgrim Missionary Baptist Church.

Mentorship in Indy:More kids than ever need mentors, but there aren't enough to go around. You can help.

Washington said they are family-oriented and she wanted EJ to stay busy. She also watched her older son, Isaac, get to know three Bigs, one he still talks to this day.

"You have that positive role model," Washington said. "Sometimes children open up more and better with people that are not closely related."

When Hogsett talks, EJ listens — and it goes both ways. They both clearly care about what the other is saying, whether it's a recent game, EJ's latest grade on a test or college plans.

But they do more than talk about school. Hogsett and EJ have gone hiking, shared many meals — typically Five Guys if EJ picks — and attended sporting events like the College Football National Championship.

And when EJ takes the football field as a cornerback for the Red Devils, Hogsett joins his family in the stands to cheer him on, although he tries to be discreet about supporting one team over another.

"He really is an outstanding football player," Hogsett said, "and it's just been a joy to watch."

One of Hogsett's favorite memories in the stands was when EJ returned an interception for a touchdown against Lawrence Central High School in September 2020. His interception tied the game.

The pair were first connected in March 2019. In the middle of growing their relationship, the coronavirus pandemic threw in some curveballs. But Hogsett said they found a way to keep up with each other. EJ said they texted often, and after a month or so apart, they followed the agency's guidelines and met in person.

"I know when they let us see each other," EJ said. "We were seeing each other right away."

What's next for EJ?

EJ and Hogsett spend quite a bit of time talking about the future.

"Our level of comfort in just talking about everything and anything ... it's much different than it was three years ago," Hogsett said.

Whether that's planning college trips, going over scholarships or chatting about keeping grades up, EJ said his post-secondary plans are a frequent topic with Hogsett. EJ is a 21st Century Scholar, which provides college tuition to students who complete its Scholars Success Program and meet other requirements.

"EJ and I talked a lot about how can we develop strategies where you'll be able to go to college, and maybe if you do well enough, get out of college debt-free," Hogsett said.

EJ said Hogsett shares with him to "always go for what I want to do and go hard at it."

When Hogsett and EJ go out together, Hogsett introduces him to everyone, including city leadership.

"I hope that's beneficial to him because not only is he mature enough to be very, very communicative and gracious, but he's meeting people," Hogsett said.

At WISH Park on a recent afternoon, the pair spent some time catching up with each other. Hogsett congratulated EJ for his good score on a recent math test.

While posing for a few pictures, Hogsett went in for a big side-hug. EJ laughed at him.

"I'm not going to be embarrassed by that," Hogsett said.

EJ is soft-spoken. Hogsett says enough for both of them, they joked. Hogsett acknowledged he can be a bit embarrassing.

They're a lot like family. If Hogsett is waiting on EJ before they go somewhere, he will sit and talk with his mother about how he's doing and what's been going on.

"Sometimes... you didn't have that person that you can confide in, that will push you to be better and will push you in the right direction," Washington said. "And I feel like, with Joe, he gets that from him."

Saying goodbye with a hug and "I love you, bro," EJ said it's been good to always have someone there for him.

Hogsett said he's learned as much from EJ as EJ has learned from him.

Get involved in Big Brothers Big Sisters of Central Indiana