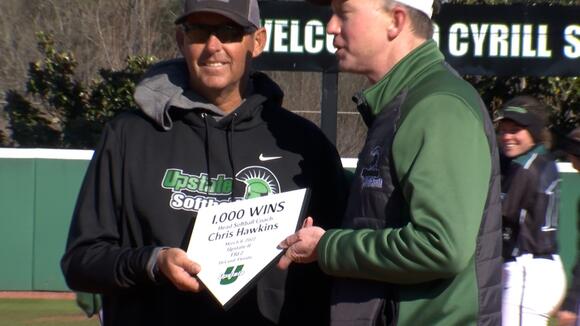 Spartanburg, S.C. (USC Upstate SID) – USC Upstate softball split the first of a two-day series with Longwood University, falling 7-1 in the first game but coming back to win 5-3 in the second game.

Upstate took a one run lead early as Bella Bertot started her first game as catcher and recorder her first RBI this season. The Spartans and Lancers traded hits and strikeout for the next four innings until a Peyton Darnell took her third plate appearance of the game to hit a home run through left center.

Sarah Price and Peyton Darnell led the Spartans in game three with one run each as well as recording one hit each along with Bella Bertot and Denver Lauer , and Mady Lanoux who recorded two. As a team, the Spartans maintained a 1.00 fielding percentage and a .261 batting average.

Immediately following the win, the Spartans joined head coach Chris Hawkins at center field to recognize his massive accomplishment recorded last Sunday against FIU. Coach Hawkins was presented with an engraved home plate to commemorate his 1000th career win as a head coach while some of the most influential players, friends, and staff of Hawkin’s career congratulated him. The win on Sunday was just one of coach Hawkins many career highlights through his 29 seasons as a head coach for the Spartans.

A Clemson Athletics spokesman told 7 News Sports Friday afternoon that guard Brevin Galloway is listed as day-to-day with an abdominal injury. Galloway first reported a groin issue via social media Thursday night. He posted a video Friday from a hospital bed detailing what he’d endured (viewer discretion advised if you locate it). The sixth-year […]
CLEMSON, SC・11 HOURS AGO
WSPA 7News

ASHEVILLE, N.C. – Drew Pember scored a school-record 48 points and UNC Asheville beat Presbyterian 88-80 in overtime. Pember’s 48 points are the most in a Division I game this season, bettering the 46 Western Illinois’ Trenton Massner on Monday and the 46 of Long Beach State’s Marcus Tsohonis last Saturday. Pember made 14 of […]
ASHEVILLE, NC・2 DAYS AGO
WSPA 7News

Greenville, S.C. – Marcus Foster connected on the eventual game-winning three-pointer with 30 seconds to go and Jalen Slawson posted game-highs with 26 points and 11 rebounds to lead Furman to a 91-84 overtime win versus Southern Conference-leading Samford on Wednesday night at Timmons Arena. With the victory, Furman improved to 16-6 overall and 7-2 in […]
GREENVILLE, SC・2 DAYS AGO
WSPA 7News

Greenville County Schools is looking to focus more on career education. Now, they are just seven months away from an innovation center that will introduce students to high-tech career opportunities in the automotive, IT, aerospace, and energy sectors.
GREENVILLE COUNTY, SC・2 DAYS AGO
WSPA 7News

Retail and dining center starting to take shape in Anderson

A retail and dining center in Anderson is finally coming to life after months of anticipation.
ANDERSON, SC・2 DAYS AGO
WSPA 7News

BREVARD, N.C. (QUEEN CITY NEWS) — A search for a missing Georgia man was found Thursday after his damaged vehicle was found parked at a Blue Ridge Parkway overlook in North Carolina, according to the Transylvania County Sheriff’s Office. At approximately 1:21 p.m. search crews located 39-year-old Osha Ray Berry, Berry was in a remote […]
TRANSYLVANIA COUNTY, NC・1 DAY AGO
WSPA 7News

1 dead after crash in Anderson Co.

One person is dead following a two-car crash this afternoon in Anderson County.
ANDERSON COUNTY, SC・3 HOURS AGO
WSPA 7News

PICKENS COUNTY, S.C. (WSPA) – One person died Wednesday morning in a crash in Liberty. The South Carolina Highway Patrol said the crash happened around 7:25 a.m. on US 123 southbound at mile marker 10. Troopers said a Honda SUV was traveling south when it lost control and hit the passenger side of a Kenworth […]
PICKENS COUNTY, SC・2 DAYS AGO
WSPA 7News

SPARTANBURG COUNTY, S.C. (WSPA) – One person died Tuesday afternoon days after a crash in Boiling Springs. The Spartanburg County Coroner’s Office said the crash occurred around 12:58 p.m. at the intersection of Highway 9 and Old Furnace Road on January 11th. The coroner identified the man as 26-year-old William Sigafoos, of Spartanburg. The crash […]
BOILING SPRINGS, SC・2 DAYS AGO
WSPA 7News

HONEA PATH, S.C. (WSPA) – The Honea Path Police Department has discovered the reason for the big “boom” heard in the city Thursday morning. Police learned that the big boom felt and heard in the city was from two new variant military aircraft on a test flight from Lockheed Marting at the Donaldson Center. Officers […]
HONEA PATH, SC・1 DAY AGO
WSPA 7News

Spartanburg Co. deputies awarded for ‘above and beyond’ actions

The South Carolina Sheriff’s Association’s Medal of Valor is awarded to officers "who perform actions above and beyond the call of duty."
SPARTANBURG COUNTY, SC・14 HOURS AGO
WSPA 7News

Greenwood School District 50 introduced its new app this week as a way to improve communication with families.
GREENWOOD, SC・2 DAYS AGO
WSPA 7News

Price of eggs steeply rises nationwide due to avian influenza

You may have noticed at the grocery store or even out to eat the price of eggs has soared.
CLEMSON, SC・8 HOURS AGO
WSPA 7News

Response times for emergency services in Anderson County have improved, but call volume has increased.
ANDERSON COUNTY, SC・1 DAY AGO