By Andrew Buller-Russ
Sportsnaut
18 hours ago 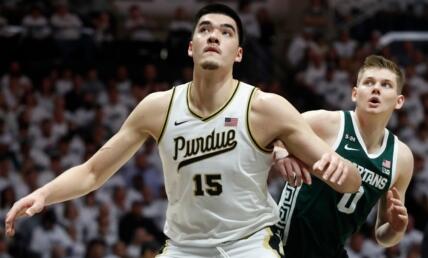 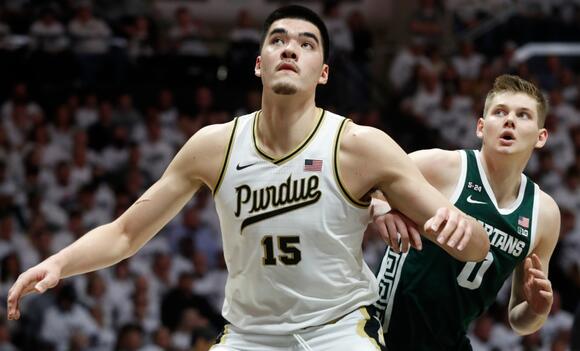 Here you can find the slate of matchups each day, as well as some worthwhile information on this season’s NCAA tournament and previous champions of the annual March Madness.

Related: Get Paramount Plus today and watch live sports for an unbeatable price!

There is one college basketball game today featuring top-25 teams. That consists of Boise State visiting Southern California to take on No. 22 Fresno State. The game wil air at 9:00 PM ET on FS1.

Subscribe to Sportsnaut’s FREE Morning Brew! A delicious blend of the freshest headlines, rumors, rankings, and much more. Get your sports fix daily, direct to your inbox. Sign-up now .

When does 2023 March Madness begin?

Who is favored to win the NCAA championship?

Entering February, the Houston Cougars (+600) are favored to win the men’s NCAA national championship, per the latest odds from BetMGM .

Here are the favorites to win the NCAA championship entering February.

When is Selection Sunday 2023?

Selection Sunday is on Sunday, March 12. The field of 68 teams for March Madness 2023 will be revealed, with brackets for the men’s and women’s DI NCAA basketball tournaments announced.

How to fill out the NCAA bracket?

There are various ways for an individual to fill out their brackets. For folks who are not experts in the sport or in betting, the best strategy is to avoid picking upsets. The annual NCAA basketball tournament is one of the most unpredictable in sports.

However, if you were to try your hand at picking an upset, choosing the No. 10 or 11 seeds in a bracket is a strong option. Those lower-ranked teams have scored upset wins 87 times during the tournament’s history.

Who won the 2022 NCAA championship?

After a month of frantic action and the typical shocking upsets, the Kansas Jayhawks — led by head coach Bill Self — took home the university’s fourth national championship by beating the legendary school, North Carolina. The victory in the tourney final was Kansas’ first national title since 2008.

Just days before the 2023 Super Bowl, one of the star players that is set to take the field for the game has been arrested on absolutely shocking charges. Offensive Lineman Josh Sills, who is in his rookie season for the Philadelphia Eagles, will be in court on February 16 in relation to claims that are so shocking and vile that we recommend you read for yourself here.
PHILADELPHIA, PA・2 DAYS AGO
OnlyHomers

The Arizona Cardinals have been looking to fill their vacant head coach role, and there are loud rumblings of a key reason why it is taking so long to fill. The name that everyone brings up when discussing the issues with the team filling the coaching spot is quarterback Kyler Murray.
19 HOURS AGO
Sportsnaut

10 NBA trade deadline stars to watch and ideal destinations, including DeRozan and Irving

After finishing second in the Western Conference a year ago, the Memphis Grizzlies are back on top in 2023. Well,
MEMPHIS, TN・2 DAYS AGO
Sportsnaut

Just 11 days away from Super Bowl LVII, a member of the Philadelphia Eagles roster has been indicted on charges
PHILADELPHIA, PA・2 DAYS AGO
Sportsnaut

Courtney Vandersloot will not return to the Chicago Sky, the free agent guard announced Tuesday on social media. Vandersloot, who
CHICAGO, IL・2 DAYS AGO
Sportsnaut

The Los Angeles Lakers and Utah Jazz are reportedly discussing a trade centering Russell Westbrook. What would a potential deal look like?
LOS ANGELES, CA・9 HOURS AGO
Sportsnaut

As of this publishing, the Boston Celtics have the best record in the NBA, and they’re already coming off an
BOSTON, MA・2 DAYS AGO
Sportsnaut

The Philadelphia Eagles are set to take on the Kansas City Chiefs in Super Bowl LVII after running roughshod through
PHILADELPHIA, PA・1 DAY AGO
chatsports.com

No. 16 Duke Welcomes Pitt to Cameron for Midweek ACC Contest

Looking to bounce back from Sunday's setback at Florida State, Duke returns to Durham for a brief pit stop, tipping off the month of February with a midweek contest against Pittsburgh Thursday, Feb. 2 at 6 p.m., live on ACC Network. Pam Ward and Stephanie White will call the action...
DURHAM, NC・1 DAY AGO
Sportsnaut

The Chicago Bears are believers in the upside of quarterback Justin Fields and that is why there is a very
CHICAGO, IL・2 DAYS AGO
Sportsnaut

Winless on road in Big Ten, Maryland travels to Minnesota

A victory over the Big Ten’s last-place team, Minnesota, might not seem like a big deal. But for Maryland, it
MINNEAPOLIS, MN・2 HOURS AGO
Sportsnaut

Kristi Toliver is returning to the Washington Mystics in free agency. She made the announcement on Wednesday on social media
MARYLAND STATE・2 DAYS AGO
Sportsnaut

Free agent guard Kia Nurse signed a contract with the Seattle Storm on Friday. Terms of the deal were not
SEATTLE, WA・7 HOURS AGO
Sportsnaut

Patrick Mahomes didn’t mince words on Thursday when asked about the importance of having two Black quarterbacks start a Super
KANSAS CITY, MO・1 DAY AGO
Sportsnaut

The Philadelphia 76ers fancy themselves as one of the top contenders to unseat the defending NBA Champion Golden State Warriors
PHILADELPHIA, PA・2 DAYS AGO
Sportsnaut

Creighton has propelled itself into contention for the Big East regular-season title with a spirited run. The Bluejays (14-8, 8-3
OMAHA, NE・3 HOURS AGO
Sportsnaut

Stopping No. 5 Arizona star is tall task for Oregon State

There doesn’t appear to be any stopping Arizona’s Azuolas Tubelis as No. 5 Arizona goes for its sixth consecutive victory
TUCSON, AZ・1 HOUR AGO