‘If it were now I think I’d have a nervous breakdown’: Sam Tutty on becoming the star of Dear Evan Hansen in the West End 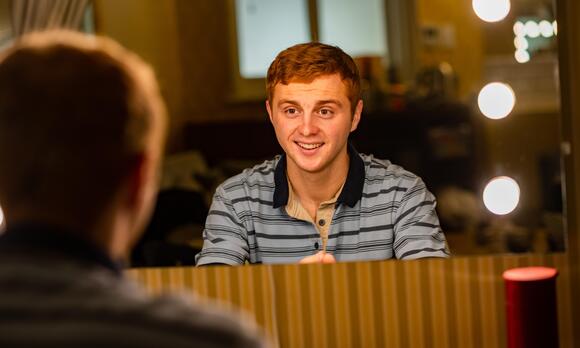 Sam Tutty is a rising star in British theatre – which is very lucky for British theatre, because until quite recently the 22-year-old thought he might become an athlete. “But by the time I finished my A-levels it had just got too hard. I’d sprint for 20 minutes then throw up,” he says over a Zoom chat.

Fortunately, this self-deprecating young man discovered other talents at his West Sussex comprehensive. “I did a drama GCSE – and I was like: ‘This is really fun.’ I was getting good grades and it was really enjoyable and I wasn’t having to try too hard,” he says.

He may joke about shying away from hard work, but it’s clearly not true. Deciding that he wanted to pursue acting, he enrolled on a year-long foundation course at the renowned Italia Conti academy, winning a scholarship. Thankfully, there was no vomiting.

“The teachers there were phenomenal,” he says. “It was a dance-heavy school and I was really thrown in at the deep end, but the teachers always said that if they could see you were trying then they’d rate you. And I really respect that. Now, I can move: give me a routine, give me a month and I can do something with it.”

It was at Conti that he heard about a casting call for an intriguing American musical called Dear Evan Hansen. “I remember listening to it and I was like: ‘Oh my gosh it’s so different!’” says Tutty. “You can’t really see any elements of traditional musical theatre in it.”

The show follows Evan Hansen, an American high school student who, in a misguided attempt to console the grieving family of Connor Murphy, a troubled classmate who has recently taken his own life, fabricates a thread of emails between the two of them to show that he had at least one true friend. It’s a unique musical with a taxing and delicate central role: Hansen hardly leaves the stage, and any actor playing him needs to sing like an angel and deliver nuanced acting, lest Hansen comes across as calculating, rather than a panicked young person out of his depth.

Related: ‘We are very, very hard on ourselves’: why so many mothers will identify with Dear Evan Hansen

Does he relate to Hansen, whose head he’s been inside for so long? Personality-wise, says Tutty, they’re polar opposites and he’s never been faced with a similar situation – but being able to relate to Evan in spite of this is vital.

“He can’t look like he’s enjoying it in any way,” Tutty says. “You can’t make it too funny, because then people will say: ‘Look at this sociopath only pretending to be nervous, why would I root for him?’ He’s only doing what he thinks is right – it’s so important I make the audience understand.”

Landing the part was a long process, which he survived, he says, thanks to a combination of naivety and his mum’s advice. “If it were me now I think I’d have probably had a nervous breakdown,” he laughs. “I was so ignorant of the scale. But my mum was a real help. Every time I got another recall she said: ‘Just relax – it’s not a big thing, just look at it as character building.’”

Tutty attended an open audition, had a great time, and didn’t hear back. A few months later, his agent got him a fresh audition, and that set him on the path that would bag him the role, but not before he’d had more than a dozen callbacks, several in New York. It went on for so long that he ended up taking a role in the musical Once on This Island in the summer of 2019. He looks back on the time fondly, but with a certain amount of amusement and bemusement. “One day, after my second New York trip, I landed at Heathrow at 9am and then got the tube to Covent Garden where we were rehearsing [Once on This Island] and did a 10-til-six. I was on my knees!”

Midway through, he learned he’d got the Dear Evan Hansen gig, and rehearsals started shortly thereafter. When the show opened at the Noël Coward Theatre in the West End of London, in November 2019, both it and Tutty won rave reviews. His is a staggering performance: a masterclass in sensitive teenhood spiralling out of control, plus skyscraping songs – check out You Will Be Found. An Olivier award nomination duly followed. The show looked to be unstoppable.

But then everything stopped. The pandemic meant Dear Evan Hansen had to close for 17 months. Some consolation: the postponed Oliviers were held in a semi-digital ceremony that autumn, and Tutty won best leading actor in a musical, with the show itself winning best new musical the same year – adding to an impressive collection of accolades that includes Tonys for best musical, best book of a musical, best original score; and a Grammy for best musical theatre album. The award was a shock to the system, he says, admitting that he struggles to feel he’s earned it (for the record, he has).

Dear Evan Hansen is now back on stage and currently booking, providing a very rare opportunity indeed to see an Olivier-winning production nearly three years on – what’s more, the cast reckon they’re better than ever thanks to re-rehearsing the show post-lockdown. “All my friends or family who came to see it again were like: ‘Don’t take this the wrong way, you were all amazing pre-Covid, but this is a different show’ – and we agreed with them!”

In the UK and Ireland, Samaritans can be contacted on 116 123 or email jo@samaritans.org or jo@samaritans.ie. In the US, the National Suicide Prevention Lifeline is 1-800-273-8255. In Australia, the crisis support service Lifeline is 13 11 14. Other international helplines can be found at www.befrienders.org

Dame Hilary Mantel, who has died aged 70 after suffering a stroke, was the first female author to win the Booker prize twice, which she did for the first two volumes in her epic trilogy of the life of Thomas Cromwell, Wolf Hall (2010) and Bring Up the Bodies (2012). The novels, which collectively weigh in at about 2,000 pages, have sold 5m copies worldwide, were made into an acclaimed BBC series (2015) staring Mark Rylance, and adapted by Mantel herself for the RSC stage version (2014), a process that she loved. The trilogy culminated with The Mirror and the Light (2020) and the death of Cromwell; it turned out to be her final novel. All told in the present tense, the novels constitute a feat of immersive storytelling and a monumental landmark in contemporary fiction.
BOOKS & LITERATURE・1 DAY AGO
The Guardian

At least 77 people have drowned after the migrant boat they boarded in Lebanon sank off Syria’s coast, the deadliest such shipwreck from Lebanon in recent years, amid fears the death toll could be far higher. The country, which has been mired since 2019 in a financial crisis the...
ACCIDENTS・2 DAYS AGO

The Ukrainian counteroffensive is yet another major development in the Russia–Ukraine war that took Russia entirely by surprise. Images of fleeing Russian soldiers, leaving behind equipment as well as evidence of war crimes, have once again filled the media. Wiping out months of Russia’s territorial gains, quick Ukrainian advances caused a domino effect; massive and chaotic Russian retreat left a huge hole in their defences.
POLITICS・2 DAYS AGO
The Guardian

The main perpetrator of an assault against a group of women at a barbecue restaurant in China has been sentenced to 24 years in prison, after the case sparked a national debate over gender-based violence. Chen Jizhi started hitting the women after they rejected his “harassment” in the early hours...
PUBLIC SAFETY・2 DAYS AGO
The Guardian

Rolling report: Roger Federer has played the final match of his storied career alongside Rafael Nadal in London. Bryan Graham was watching
TENNIS・1 DAY AGO
The Guardian

Western officials say true target could be higher but significant hurdles remain to mobilise stated target of 300,000
POLITICS・1 DAY AGO
The Guardian

Arrests made in 32 cities at rallies against mobilisation; border crossings from Russia to Finland have doubled and 10km queue reported at frontier with Georgia
PROTESTS・21 HOURS AGO
The Guardian

Don’t leave your job because of this man who will only give you bits of himself. Instead, consider leaving him
RELATIONSHIP ADVICE・2 DAYS AGO
The Guardian

Target Venus not Mars for first crewed mission to another planet, experts say

With a surface hot enough to melt lead, crushing atmospheric pressure and clouds of sulphuric acid, Venus might not sound like the most enticing destination for human exploration. But a group of experts are advocating that our other nearest neighbour, rather than Mars, should be the initial target for a...
ASTRONOMY・36 MINUTES AGO
The Guardian

‘A way to get rid of us’: Crimean Tatars decry Russia’s mobilisation

Rights activists in Crimea say Russia’s mobilisation drive in the occupied peninsula is disproportionately targeting Crimean Tatars, an ethnic group that has largely opposed Russian rule since the area was annexed in 2014. “Everywhere, in every town, I am hearing that the majority of those mobilised are Crimean Tatars,...
ADVOCACY・1 HOUR AGO
The Guardian

Roger Bamber, who has died of lung cancer aged 78, was a leading photojournalist covering music, riots and politics for British newspapers from the Sun to the Guardian. He won photographer of the year for each of those newspapers – a unique achievement. While at the Sun, he snapped...
ENTERTAINMENT・2 DAYS AGO
The Guardian

Eddie Butler was a rarity in top-class sport. He became more famous once his playing days were over for his work as a broadcaster, journalist and novelist. The one-time captain of Wales was the natural heir of the “voice of rugby”, Bill McLaren, with whom he shared the BBC commentary box in his early days as a broadcaster. Butler became, more specifically, the voice of Welsh rugby, his mellow tones from those chilly, winter afternoons high in TV gantries and press boxes warming the listener, while his printed words on the game equally delighted readers of the Observer and Guardian.
OBITUARIES・2 DAYS AGO
The Guardian

‘This should not be normalised’: Why musicians are cancelling tours to protect their mental health

In early August, Yard Act were at Stansted airport, waiting for a flight to Sicily, when singer James Smith hit a wall. “It felt as if I was in a cattle shed,” he says. “I was banging my head against the table saying: ‘I can’t do this any more.’”
MENTAL HEALTH・3 DAYS AGO
The Guardian

Russia-Ukraine war latest: what we know on day 212 of the invasion