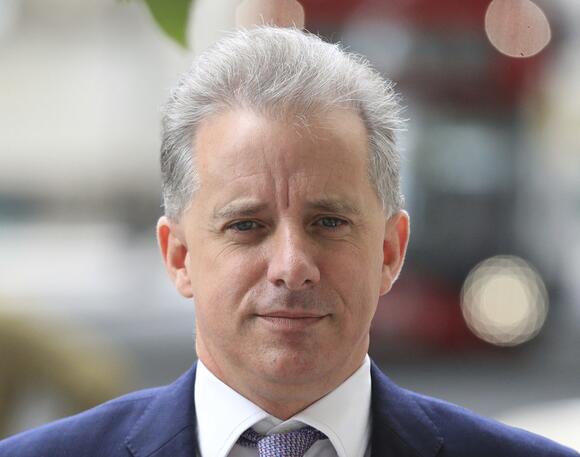 B ritish ex-spy Christopher Steele reemerged to weigh in on Russian President Vladimir Putin’s invasion of Ukraine, avoiding any questions about his discredited dossier and making no mention of his former Russian oligarch client, Oleg Deripaska, who has called for "peace" in recent days. Steele spoke with the BBC over the weekend and criticized the West for misjudging Putin.

Deripaska, a Kremlin ally known for his prior business relationships with Steele and Trump campaign manager Paul Manafort , is accused of assisting the Russian government’s influence operations worldwide and repeatedly tweeted Monday that “we need peace.” He also shared a lengthy video that criticized Putin and his invasion.

Steele was working for Deripaska before, during, and after his time targeting then-candidate Donald Trump, and the former MI6 agent was hired to put the discredited dossier together by an opposition research firm, Fusion GPS , which was hired by the Clinton campaign.

Deripaska paid Steele to investigate Manafort after accusing the Republican operative of stealing millions from him, and Steele sought help from Fusion in early 2016. Last week, the Justice Department launched the KleptoCapture task force, which is aimed at enforcing U.S. sanctions targeting the Kremlin, with President Joe Biden vowing to go after crimes committed by Russian oligarchs .

Michael Buerk, the host of BBC’s Moral Maze , said this weekend that “our next witness is Christopher Steele, who is the former head of the Russia desk at MI6, now a security consultant, who was at the center of the controversy over the Trump campaign’s alleged connections with Russia — but that’s not our focus tonight.”

Steele was asked by BBC whether the Russian president's invasion of Ukraine was always going to happen.

“I don’t think it was inevitable. I think if you look back to the, if you like, the founding of this Putin regime, which was quite likely based on similar type of tactics that we’re seeing there in Ukraine — disinformation, false flag operations ... the apartment bombings in Moscow in 1999 — it was clear that this was a gangster regime pretty much from the get-go,” Steele said. “But we didn’t really have the imagination or the determination to call it out.”

Steele was referencing the theory that a series of deadly Russian apartment bombings in September 1999 were not carried out by Chechen rebels as the Russian government concluded but rather by Russia’s own Federal Security Service, the successor agency to the KGB, which was briefly headed by Putin before he became prime minister to Russian President Boris Yeltsin in August 1999. Putin’s handling of the bombings and the Kremlin’s war in Chechnya helped lead Putin to a presidential victory in 2000.

The British ex-spy was asked what the West should do if Russia takes over Ukraine, and he pointed to the Afghan insurgency against the Soviets.

“I think we have to look at other campaigns where we’ve been effective,” Steele said. “And indeed, the supply of Stinger missiles and so on to Afghanistan in the 1980s changed the balance of power in that insurgency, and I think we have to basically try that type of tactic in Ukraine going forward.”

The Soviet Union invaded Afghanistan in 1979 in an effort to prop up the new communist regime there, and the United States worked with Pakistani and Saudi intelligence to supply weapons to the Afghan mujahedeen fighters to eject the Soviets.

The death toll over the next decade included hundreds of thousands of civilians, more than 55,000 mujahedeen, roughly 18,000 Soviet-aligned Afghans, and more than 14,000 Soviet troops. Following the Soviet withdrawal, a deadly civil war raged until the Taliban took over most of the country in 1996, continuing to battle the Northern Alliance and harboring al Qaeda before and after the 9/11 attacks, leading to a U.S. invasion in 2001.

Hillary Clinton also said at the end of February that the Afghan insurgency against the USSR “is the model that people are now looking toward.” The former secretary of state said, “It didn’t end well for the Russians. There were other unintended consequences as we know.”

The former MI6 agent was also asked how he thinks the West should’ve responded to Russia’s 2014 invasion and annexation of Crimea.

“I think the sort of measures that we’re seeing now should’ve been brought in at that point because that was the first invasion, if you like, of sovereign territory belonging to another country,” Steele replied.

Russia famously invaded the Georgian regions of Abkhazia and South Ossetia in 2008 and maintains its occupation to this day.

Igor Danchenko, a U.S.-based and Russian-born researcher, was the main source for Steele's anti-Trump dossier. Danchenko was charged last year with five counts of making false statements to the FBI. Special counsel John Durham’s indictment said Danchenko made these statements about the information he provided to Steele for his dossier, which the FBI relied upon when pursuing authority for the flawed secret surveillance of former Trump campaign adviser Carter Page.

Steele gave a rare televised interview in October in which he claimed that he wasn’t worried about being indicted by Durham and stood by his discredited dossier. He also acknowledged that “there is a chance” it contained Russian disinformation.

The Senate Intelligence Committee’s 2020 report found that “the Russian government coordinates with and directs Deripaska on many of his influence operations" around the world. The investigation found that Steele’s relationship with Deripaska “provided a potential direct channel for Russian influence on the dossier."

An email from Steele in February 2016 claimed that Deripaska “is not the leadership tool [of the Kremlin] some have alleged." But the Senate report revealed that investigators “found ample evidence to dispute Steele's assessment.”

The Mil Mi-8 helicopter hit the ground at Vnukovo airport with its blades and tail, Russian media reported.
2 DAYS AGO
The Hill

There has been substantial media coverage of President Biden and former Vice President Pence both removing marked classified documents outside the White House after they left the vice presidency (and, in the case of Biden, also including after he was a U.S. senator). Both insist they did so inadvertently.   Of course, the word “inadvertent” does not apply to former President Trump’s behavior. As we now know from Mr. Trump’s own admission, he knew documents he took to Mar-a-Lago were classified…
WASHINGTON STATE・11 HOURS AGO
Business Insider

Graham said on Saturday that there are "many, many talented people" in the GOP, but there is "only one Donald Trump."
SOUTH CAROLINA STATE・22 HOURS AGO
Business Insider

This help line is a growing effort to give Ukraine vital advice on repairs and maintenance as it pushes weapons to their limits.
WASHINGTON STATE・15 HOURS AGO
WashingtonExaminer

Rep. Adam Schiff (D-CA) is facing an early obstacle to his 2024 Senate bid after a nonprofit ethics organization filed a complaint to the Office of Congressional Ethics accusing the California Democrat of using government resources to boost himself politically.
CALIFORNIA STATE・3 DAYS AGO
Benzinga

Over a dozen letters exchanged between former U.S. President Donald Trump and North Korean leader Kim Jong Un have been published by the Korean-American Club. What Happened: Trump’s self-described 'love letters' from Kim were retrieved by the authorities from his Mar-a-Lago residence in Florida. In the letter, Kim reportedly expressed his willingness to discuss his isolated country’s denuclearization with Trump while sidelining then-South Korean President Moon Jae In, reported Star And Stripes.
FLORIDA STATE・2 DAYS AGO
Newsweek

The GOP lawmaker recently urged Democrats to join Republicans in a newly formed subcommittee tasked to investigate the "weaponization" of the federal agencies.
OHIO STATE・1 DAY AGO
WashingtonExaminer

Federal prosecutors considered pressing charges against former President Donald Trump shortly after he left office for campaign finance violations but ultimately decided against it, according to a new book.
WASHINGTON STATE・3 DAYS AGO
NBC News

SRINAGAR, India — Weapons left behind by U.S. forces during the withdrawal from Afghanistan are surfacing in another conflict, further arming militants in the disputed South Asian region of Kashmir in what experts say could be just the start of the weapons’ global journey. Authorities in Indian-controlled Kashmir...
WASHINGTON STATE・21 HOURS AGO
WashingtonExaminer

Russia’s defense industry has “almost doubled” its prewar ammunition production rates, according to a senior NATO member defense official who estimated that Ukrainian forces could face as many as 10,000 incoming rounds per day.
WASHINGTON STATE・2 DAYS AGO
WashingtonExaminer

There are 10 days left before recipients of Social Security retirement money start receiving their monthly payment of up to $4,194 for the month of February.
1 DAY AGO
Newsweek

"There is no other way to talk to these fools," State Duma member and former military commander Andrey Gurulyov said.
13 HOURS AGO
WashingtonExaminer

The zookeeper who was severely mauled by a black bear on anxiety medications left a door open, allowing the bear to leave its enclosure, according to new findings released by the Florida Fish and Wildlife Conservation Commission.
JACKSONVILLE, FL・3 DAYS AGO