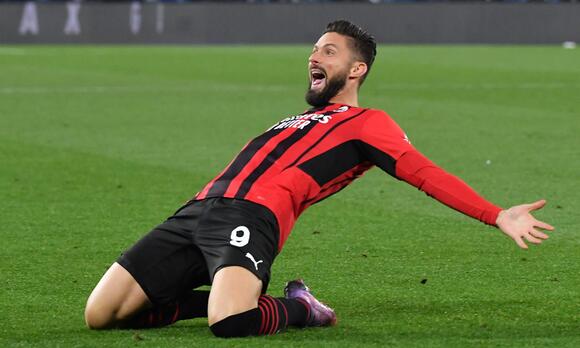 As players swapped shirts and fans began to make their way to the exits at the Stadio Diego Armando Maradona, Olivier Giroud ran a hand over his beard and listened to an interviewer from Dazn complimenting his Italian. His eyebrows raised at the question that followed: “You’re a bit like Zlatan [Ibrahimovic]: you give instructions, you encourage, you motivate your teammates. So now that he’s back, who plays?”

It was an unexpected line of enquiry on a night when Giroud had, once again, shifted the course of Serie A’s title race, scoring the goal that delivered Milan victory over Napoli just as his two strikes had sunk Inter a month before . He blew out his cheeks and shrugged before reflecting: “I don’t want to think about who is going to play. My job is also to be a big brother to the young players.”

What more could you ask of your sporting sibling than the performance Giroud turned in on Sunday? For 68 minutes, he led from the front, throwing himself into challenges even after Kalidou Koulibaly’s stud had raked a deep gouge into his left shin. By half-time he looked spent, laying flat on the turf while the rest of the players headed for the tunnel. Yet he would decide the game after the interval.

It looked a lucky deflection at first, Giroud sticking out a boot to redirect Davide Calabria’s shot inside the left-hand upright after the ball was blocked twice at a free-kick. Repeat viewings showed that it was nothing of the sort. Giroud’s subtle step into the space behind Koulibaly half a beat beforehand had positioned him to be decisive on any ball that fell to the middle of the box.

More memorable goals have been scored in this fixture. The prospect of these teams contesting a Scudetto had turned minds back to 1988 , when the individual brilliance of Maradona collided with the collective authority of Arrigo Sacchi’s first Milan side. Their showdown that May remains one of the most acclaimed games in Italian football history, a 3-2 win for the Rossoneri sealed by Marco van Basten after a dazzling run from Ruud Gullit.

There is no Maradona in today’s Napoli, besides the likenesses that the club have been printing on to their absurdly long line of replica shirts . It is hard to imagine a Milan team that finished bottom of its Champions League group conquering Europe twice in the next two years, as Sacchi’s team went on to do.

Yet this has been one of the most compelling title races for many seasons. Napoli and Milan started the weekend level in first place. By the time they kicked off, Inter, had thumped Salernitana to move ahead of them. Even Juventus had temporarily closed back within four points on the back of a 14-game unbeaten run.

Napoli’s manager, Luciano Spalletti, further amplified the moment, stating that his team stood at a crossroads, with a chance to either become “immortal” or be forever forgotten. Not before or since Maradona have the Partenopei been champions of Italy.

There is a feeling of ‘now or never’ for a team who finished second with a club-record 91 points under Maurizio Sarri in 2018. Lorenzo Insigne overtook Maradona in the club’s scoring charts this February but will leave to join Toronto FC in June. Dries Mertens, now 34, would like to prolong his stay but no extension has yet been agreed for his contract beyond this summer.

Napoli have introduced fresh talent during the intervening seasons, too, and there can be a bright future built around players such as Fabián Ruiz and the club-record signing Victor Osimhen. Still, theirs is a different scenario to that of Milan, three years into a rejuvenation project under Stefano Pioli. His pre-game remarks set the stage very differently, downplaying the importance of any one game and stressing the focus should always be on overall progress.

Perhaps that framing helped his team, reducing any pressure they might have felt. Or maybe he just got his tactics right. Pioli swapped his usual 4-2-3-1 for a 4-3-3 that allowed Milan to go man-for-man across the midfield, Franck Kessié and Ismaël Bennacer pressing high on to Fabián Ruiz and Stanislav Lobotka, while Sandro Tonali sat deeper to cut off the supply to Piotr Zielinski in the No 10 role.

Napoli had more of the ball, but the visitors’ aggression pushed their centre of gravity far backwards from the areas where they prefer to operate. The result was a first half of few chances, though both teams might have had a penalty: Bennacer bumped to the ground by Kalidou Koulibaly before Osimhen had his heel kicked by Fikayo Tomori.

Either decision could have been given, but neither was. Instead, it was left to Giroud to break the deadlock in the 47th minute. The game opened up as Napoli pursued an equaliser, leaving Milan spaces to attack behind. It was the visitors who came closest to scoring again, Alexis Saelemaekers thwarted by David Ospina after going clean through in injury time.

It finished 1-0: a landmark result. This was Napoli’s first defeat of 2022, and the first time Pioli had beaten Spalletti in 12 attempts. He had played down that narrative, too, before kick-off, insisting it would “happen sooner or later”. “I would prefer later,” joked Spalletti in response.

Above all, though, this night belonged to Giroud. Perhaps Milan’s whole title bid does. The Frenchman has still only scored eight Serie A goals yet three of those have sufficed to win head-to-heads with direct Scudetto rivals Inter and Napoli in the past month. He also struck the opener in a win over Roma in January and twice in the Coppa Italia quarter-final against Lazio.

He has not yet broken the supposed curse of Milan’s No 9 shirt, as it remains true that no player has hit double figures in Serie A while wearing that number since Pippo Inzaghi. Yet there is no question that he has been a defining influence on his team’s season.

At full-time on Sunday, Pioli recalled his first contact with Giroud, a video call last summer in which he said he was quickly convinced of the value that could be brought by adding a World Cup and Champions League winner to his team. “It’s important to have players with charisma and personality,” he said. “Especially for a young group like ours.”

A role model can be useful to have around, when you’re trying to teach kids how to carry themselves and get their work done. Sometimes, though, the best thing about having a big brother is when they can just do the jobs that you might not have managed on your own.

Conte unconcerned about Tottenham contract running out at end of season

Antonio Conte has suggested the length of his contract at Tottenham is not relevant to how long he will stay as he dismissed links to Juventus as “disrespectful” and sought to focus on Saturday’s derby at Arsenal. The manager has been touted by the Italian media to...
PREMIER LEAGUE・10 HOURS AGO
The Guardian

Premier League: 10 things to look out for this weekend

There are huge derbies in north London and Manchester, while Roberto De Zerbi and Graham Potter make their league bows
PREMIER LEAGUE・9 HOURS AGO
The Guardian

Farhad Moshiri in talks over Everton deal with US businessman Kaminski

Farhad Moshiri is in advanced talks with Maciek Kaminski over an Everton deal which would see the US businessman provide funding for the new stadium and take a stake in the club. Kaminski, a US real estate magnate, was part of the consortium led by the former Manchester United and...
PREMIER LEAGUE・13 HOURS AGO

Denmark’s Queen Margrethe, Europe’s only reigning queen and the continent’s longest serving monarch, has stripped four of her eight grandchildren of their titles, the palace announced. The official reason was to allow the four children of her youngest son, Prince Joachim, to live more normal lives, and...
EUROPE・1 DAY AGO
The Guardian

Seth Meyers on Donald Trump: ‘What is wrong with you?’

Seth Meyers opened with the escalation of threats from Vladimir Putin after a series of setbacks in his invasion of Ukraine. Putin vowed that Russia will use “all means” at its disposal to continue the occupation of Ukraine, adding: “I am not bluffing.”. “OK, the problem with...
POTUS・2 DAYS AGO
The Guardian

Bridges plays an ex-CIA agent who has been in hiding for decades. Now, he’s paranoid old enemies are out to get him. Are they? Of course!
TV & VIDEOS・1 DAY AGO

In a press conference, Ron DeSantis said food, water and other supplies are being distributed to those who did not evacuate
FLORIDA STATE・2 HOURS AGO
The Guardian

The renowned US big-mountain skier Hilaree Nelson has gone missing on a trek in the Himalayas after apparently falling into a 2,000ft crevasse. Nelson and her partner, Jim Morrison, had scaled the 26,781ft peak of Manaslu mountain on Monday morning. Jiban Ghimire of Shangri-La Nepal Treks, which organised the expedition, told Outside Magazine that the pair reached the summit at 11:30am local time.
PUBLIC SAFETY・2 DAYS AGO
The Guardian

It may never be possible to determine definitively whether Monday’s underwater explosions at the two Nord Stream gas pipelines were the work of Russian sabotage, but it is certainly the way to bet. The incidents took place close to – but just outside – the 12-mile territorial waters of...
ECONOMY・2 DAYS AGO

In his first White House meeting with a major foreign leader, Donald Trump asked Theresa May: “Why isn’t Boris Johnson the prime minister? Didn’t he want the job?”. At the time, the notoriously ambitious Johnson was foreign secretary. He became prime minister two years later, in 2019, after May was forced to resign.
POTUS・1 DAY AGO
The Guardian

Swedish seismologists says blasts detected near gas pipelines, which are leaking into Baltic sea
POLITICS・2 DAYS AGO
The Guardian

Letter: For decades, patients with complex illnesses – especially those that affect women more – have been told that it’s in their heads, says Beth Pollack
SCIENCE・2 DAYS AGO
The Guardian

Russian-installed leaders of Luhansk and Kherson ask for territories to be annexed; new EU sanctions designed to ‘make Kremlin pay’
POLITICS・1 DAY AGO
The Guardian

Seth Meyers looked ahead to several major questions for the House January 6 committee on Wednesday evening, including whether to subpoena Donald Trump himself. “I gotta be honest, if I was on the committee, I’m not sure where I would land on the question of whether to subpoena Trump,” the Late Night host said.
POTUS・17 HOURS AGO
The Guardian

In a meeting supposedly about campaign strategy in the 2020 election, Donald Trump implied his son-in-law and senior adviser, Jared Kushner, might be brutally attacked, even raped, should he ever go camping. “Ivanka wants to rent one of those big RVs,” Trump told bemused aides, according to a new book...
POTUS・1 DAY AGO