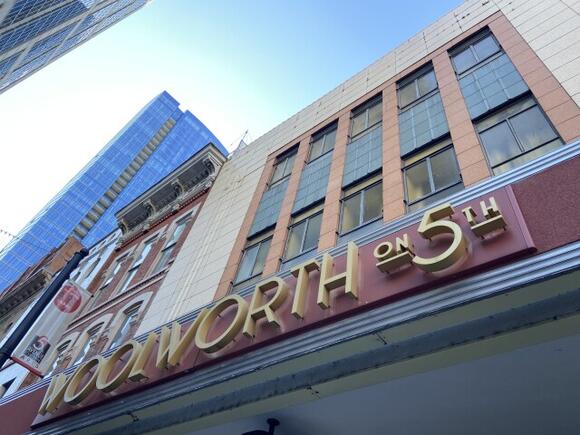 The theatre, set to open mid-2022, will accommodate 400 people with floor, box and VIP seating. It will host live musicians, plays and other acts such as songwriter nights while also serving as a cocktail lounge.

The Woolworth building in downtown Nashville has gone through many owners over the past few decades including a restaurant, Woolworth on 5th, which closed in March of 2020. Its newest owners said they are taking extra steps to honor the building's deep history.

"When we started with this project, it was to do something that hadn't been done in Nashville," said Joe Bravo, Woolworth Theatre vice president of operations.

Musician and Woolworth Theatre owner and creator Chuck Wicks and his team dreamt up a new kind of performing space in a historic Nashville building.

"It kind of goes back to the history of this place, where, you know, the sit-in movements, everything happened for inclusivity. So we want to ensure that this building also encompasses everything about inclusivity including music, you know, plays, acts; anything that can fit in our space," explained Woolworth Theatre CEO Keval Sheth.

For decades, the building was home to a Woolworth retail store.

"Woolworths was pretty much the five and dime of its time. It was kind of like the Walmart of its time. And it was known for great bargains, great shopping and then also they had their lunch counters," explained Bravo. "Where history intervenes was during the 1960s where the students from historically Black colleges and citizens of Nashville took it upon themselves to try to challenge the segregation policies in the city."

In February of 1960, all eyes were on the Woolworth in downtown Nashville when a Freedom Rider sit-in protest turned violent.

"On February 27... when the police came, they arrested all the demonstrators. They didn't arrest any of the patrons that perpetrated violence on the protesters. The protesters, one of them being future, Congressman John Lewis, sat here and passively sat there while customers beat them, berated them, put cigarettes out on their skin, and a bunch of just brutal, brutal tactics that they sat there stoically, and just held their ground," recounted Bravo. "And it was an incredibly brave demonstration of passive resistance... It was John Lewis's first arrest for civil disobedience."

The country watched the protest in the papers and soon the Nashville Woolworth lunch counter sit-ins were inspiring other peaceful protests throughout the South.

"This was the domino that led to the desegregation of all of Nashville and really the domino that felt to desegregate the country," stated Bravo. "It's very important that we keep those stories alive so that we can learn from it and know that that it is a possibility and we can't let it be repeated."

"Fortunately, we're in a time to where we've been able to understand what happened... there's enough there. We've been able to speak to people at Fisk University, other historians here in town and then fortunately for us, we were also able to meet and become really good friends with Representative Lewis’ family members, especially his nephew Jerrick," explained Sheth.

"For us to have support from him the rest of the Lewis family was was profound for us, and also a blessing," said Sheth. "Because of that, we were able to learn a lot more about not only what occurred here, but the type of man Representative Lewis and a lot of the other Freedom Riders were."

Through conversations with Jerrick Lewis, more of the history came out of the walls and is being poured into the Woolworth Theatre. That includes the theatre's logo which is the symbol on the original railings.

Sign up for the Woolworth Theatre's newsletter to receive information and ticket links for upcoming shows.

Nashville is a growing city with its sights set on the future, but many want us to remember and preserve the city's past.
NASHVILLE, TN・4 DAYS AGO
NewsChannel 5 WTVF

Tennessee State University’s marching band followed in the footsteps of their sister HBCU Fisk University and took home a win in the same category at the 65th annual Grammy Awards.
NASHVILLE, TN・3 DAYS AGO
NewsChannel 5 WTVF

Celebrating diversity, one grocery aisle at a time: A&M Marketplace

A&M Marketplace at the Nashville Farmers' Market carries products that are hard to find anywhere else in the city. The business is owned by a refugee from Ethiopia and her husband from South Sudan.
NASHVILLE, TN・1 DAY AGO
NewsChannel 5 WTVF

Now, with the help of a Fisk University professor, you can learn more about our city's history and the Civil Rights Movement.
NASHVILLE, TN・18 HOURS AGO
NewsChannel 5 WTVF

Clarksville baker barters for eggs as the price skyrockets

As the price of eggs skyrockets, a Clarksville baker has come up with a creative solution to help her customers and help her business
CLARKSVILLE, TN・3 DAYS AGO
NewsChannel 5 WTVF

The tragic killing of Tyre Nichols at the hands of police has renewed calls for criminal justice reform.
NASHVILLE, TN・4 DAYS AGO
NewsChannel 5 WTVF

Black Nashville Assembly calls for an end to police violence

It's been just over a week since graphic video was released showing the moments leading up to the death of 29-year-old Tyre Nichols in Memphis.
NASHVILLE, TN・1 DAY AGO
NewsChannel 5 WTVF

Read Across America Day is March 2. To build excitement leading up to the holiday, Loveless Cafe is partnering with MNPS to host a reading competition for middle schoolers called "Books for Biscuits."
NASHVILLE, TN・1 DAY AGO
NewsChannel 5 WTVF

Lower Broadway is one of the biggest tourist attractions in Nashville — where things can get pretty wild, and sometimes, unsafe.
NASHVILLE, TN・4 DAYS AGO
NewsChannel 5 WTVF

A new addition in East Nashville is causing a lot of buzz, and it's the first of its kind in Middle Tennessee: a "Wind Telephone." It's something that's been around in Japan for years.
NASHVILLE, TN・2 DAYS AGO
NewsChannel 5 WTVF

Thousands of people are living with Alzheimer's in Tennessee. The disease is difficult to explain to kids, but new books may be able to help.
CLARKSVILLE, TN・4 DAYS AGO
NewsChannel 5 WTVF

Our communities are not the easiest to navigate in a wheelchair. A 17-year-old in Wilson County arranged for decision-makers to spend a day in a wheelchair so they could see what it's like.
WILSON COUNTY, TN・13 HOURS AGO
NewsChannel 5 WTVF

A Middle Tennessee town is the homeplace of an artist who took the most common of household items and created stunning works of art.
WARTRACE, TN・5 DAYS AGO
NewsChannel 5 WTVF

From heartbreak to healing: A family's journey turning grief into outreach

Sometimes a single event can change your life in more ways than you could ever imagine. That's exactly what's happened for one Rutherford County couple.
RUTHERFORD COUNTY, TN・6 DAYS AGO
NewsChannel 5 WTVF

It was rock bottom that helped her kick her addiction and not only change her life, but change the lives of women who are trying to recover too.
LEBANON, TN・3 DAYS AGO