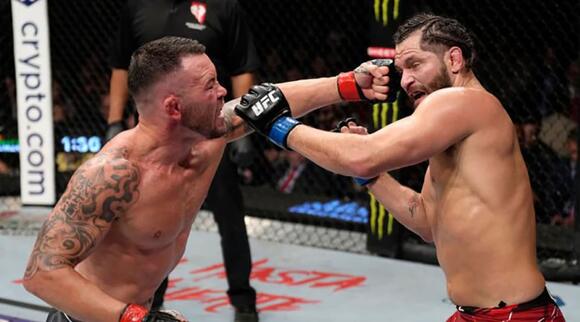 Colby Covington turned the main event of UFC 272 into a one-sided affair, dominating Jorge Masvidal and displaying complete control in the cage.

After defeating his former American Top Team teammate, Covington then challenged another former teammate, Dustin Poirier, as he continues his ongoing story with ATT. The 272 night as a whole was full of key moments from ATT fighters.

The morning after, ATT founder Dan Lambert connected with Sports Illustrated to discuss what we learned at 272.

Colby Covington is the best boring fighter in the world

Covington will never be confused with MMA’s most exciting competitors. Despite his bravado on the microphone, he is certainly not Conor McGregor in the cage, which is a byproduct of his wrestling-heavy style. It is undoubtedly effective, but it simply won’t draw headlines, which was the impetus for Covington to create a new persona in the fight world with his MAGA-inspired, Donald-Trump-loving character.

Covington embraced the controversy of the new character, and he was always confident he could back up his brash words and insults in the Octagon. That happened again at 272, where he overwhelmed former ATT teammate Masvidal, dictating the pace of the five-round fight. When Masvidal finally clipped him with a right hook on the chin, Covington had already fatigued Masvidal to the point where he was too exhausted to go for the kill. It was a perfectly executed game plan, one that only an elite fighter could administer.

“The question going in was whether Colby could maintain control following his takedowns, and if Jorge could finish if he hurt Colby,” said Lambert. “Colby did a good job keeping Jorge down and escaped the danger when he got hurt in fourth.”

Jorge Masvidal is still a draw, yet a step below the elite.

This represents a tough loss for Masvidal. Covington was simply better, both wrestling and striking, but it by no means eliminates Masvidal as a top draw.

“Jorge has lots of options both in and out of the cage,” said Lambert. “There are lots of exciting fights out there if he wants them.”

The biggest, of course, would be a future date with McGregor.

As soon as Covington had the microphone following his win, he used the moment to call out Poirier.

Poirier is another star fighter from ATT, and their bout would be an instant pay-per-view headliner, even without a title at stake.

“Dustin and Jorge, they are stars,” said Lambert. “Everybody wants the big fights and the most money, so it’s not surprising to hear anyone call them out.”

Another ATT fighter competing at 272 was Moicano. He took a head kick from Rafael dos Anjos in the third round of their bout, then was subject to an absolute beating from dos Anjos. Yet the fight was never stopped.

Even when Moicano’s left eye would barely open, he was still allowed to continue in the final two rounds.

“I think his stock went up in that fight [despite the unanimous decision loss],” said Lambert. “Moicano is a stud. He took the fight on five days’ notice and had just flown to Brazil when he got the call.”

Moicano won at last month’s UFC 271 pay-per-view against Alexander Hernandez, and took this fight at 272 on short notice. There was plenty of discussion on the broadcast—featuring Jon Anik, Michael Bisping, and the returning Joe Rogan—that the fight could and even should be stopped. Ultimately, Moicano was allowed to compete in the final two rounds, a decision Lambert supported.

“He still looked dangerous in the last round,” said Lambert. “That tells me they made the right call.”

Maryna Moroz looked outstanding in her win against Mariya Agapova, which took place during the 272 prelims. This was her first submission victory in seven years, and her first fight in two years following a litany of travel issues amidst the pandemic.

Moroz now has three straight victories, and she will make a push to become ranked in the women’s flyweight division. Lambert spoke highly of Moroz, another ATT member, especially considering that her family is back home in Ukraine in the midst of the chaos and strife of the Russian invasion.

“Maryna fought very well under a crazy set of circumstances,” said Lambert. “Probably the best I’ve ever seen her look. That is a performance that speaks volumes about her mental toughness.”

Moroz was awarded Performance of the Night honors, quite impressive considering the length of time she was away from the cage. Another integral member of the ATT team is Yaroslav Amosov, who is the reigning Bellator welterweight champion. Amosov (26-0) is scheduled to next defend his title this May in London against Michael Page, but that is a fight currently up in the air as Amosov is back home in Ukraine fighting for his country.

“I was told Yaroslav took his family to safety and was heading back to join the fight,” said Lambert. “Hearing something like that puts everything going on over here in perspective.”