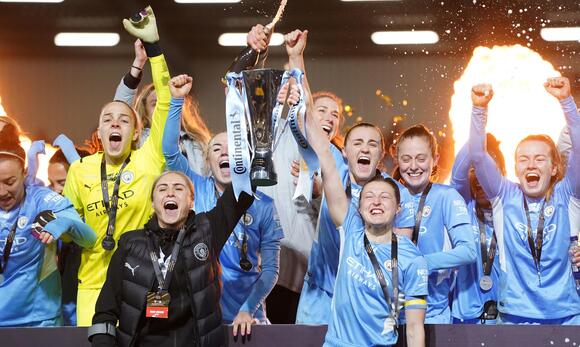 Gareth Taylor said criticism of his tenure at the start of the season felt “a little bit unjustified” after Manchester City beat Chelsea 3-1 to win the Continental League Cup.

City stuttered early on in the campaign with crippling injuries, condemning them to seven defeats in their first 14 games and many questioned whether Taylor was capable of reversing the team’s fortunes.

“To be honest, I came off all social media at that time, I surrounded myself with the right people,” said the former striker. “I’m an ex-player, I’ve had criticism all my career, so I kind of know how to handle it, doesn’t mean I like it. I just tried to cut out the noise.

“I felt that it was a little bit unjustified, with the amount of injuries that we had. What were [doubters] expecting in that situation when we were only able to select two or three outfield substitutes in a game and were playing players in unfamiliar positions? It’s easy these days to point a finger and say: ‘Is this person up to it or not?’ But I think you have to have belief in what you do.”

The game was almost a microcosm of City’s season with two goals from the Scotland midfielder Caroline Weir sandwiching Ellen White’s poached effort in a gutsy second-half performance after the Australia forward, Sam Kerr, had given Chelsea the lead.

“The players are the most important thing,” Taylor said. “They’ve shown that they’re fighting, they’ve been fighting the whole season, and sometimes things haven’t gone our way. Fortunately, more recently things have started to edge our way, which is nice.”

City were unlucky not to be ahead in the 26th minute after Georgia Stanway’s cross was met by the dynamic Lauren Hemp but she rattled the ball off the foot of the post. The resulting clearance fell to full-back Demi Stokes on the edge of the area, her strike ricocheted off the high arm of Sophie Ingle but the referee, Lisa Benn, waved away the penalty appeals.

The Chelsea manager, Emma Hayes, had insisted it would be business as usual on the pitch after “a long week for people at Chelsea” and, perhaps shaken alive by Hemp’s chance, the holders started to stretch the City backline. Less than 10 minutes later they had the lead.

Guro Reiten’s cross from the left could only be pushed away by Ellie Roebuck as Stokes leant into her while going for the same ball. Kerr collected before turning and firing low and into the net.

Unperturbed, five minutes after the restart City were level. Stanway’s square ball in was taken down by Weir who fired past Ann-Katrin Berger, taking a deflection off her outstretched foot on its way in.

“When it went to 1-1 the momentum shifted,” Hayes said. “We’ve been undefeated against them 10 times [but] today’s their day; congratulations. I think they’re worthy winners because of their second-half performance. We lacked players today and I think it showed. The better team won over 90 minutes.”

With momentum swinging behind City, White gave them the lead for the first time, poking in the rebound after Berger parried Hemp’s effort. Less than 10 minutes later they extended it, again through Weir, this time volleying smartly into the top corner. Weir had come off of the bench in back-to-back Manchester derbies to score before starting in the final.

“I think one of the first conversations I had with Caroline was: ‘I know you can score from 30 yards. But what are you like in the box?’ And she said: ‘Well, I probably don’t get in there enough’,” Taylor said.

“I scored a hat-trick here once, I was telling the girls earlier, when it was the old Plough Lane. It was in the FA Youth Cup for Southampton at Wimbledon. I said: ‘See if you can match that, Ellen’.”

About this time last week, Slaven Bilic was back home in Croatia mulling over his next career move when the phone rang. Now installed as Watford’s 10th permanent manager in the past five years after Rob Edwards was relieved of his duties after 11 matches in charge, the former defender who was part of the historic side that reached the 1998 World Cup semi-finals is certainly not one to shirk a challenge.
PREMIER LEAGUE・14 HOURS AGO

Roberto Carlos wants to speak in Portuguese and it has been decided that Gilberto Silva will translate into English for him. “I need to be paid double for this,” Silva says with a smile. It is the premiere of Brazil 2002: The Real Story, an excellent documentary that charts the Seleção’s fifth World Cup triumph, and the legends are on stage for a Q&A.
PREMIER LEAGUE・14 HOURS AGO
The Guardian

Bridges plays an ex-CIA agent who has been in hiding for decades. Now, he’s paranoid old enemies are out to get him. Are they? Of course!
TV & VIDEOS・3 DAYS AGO
The Guardian

In a press conference, Ron DeSantis said food, water and other supplies are being distributed to those who did not evacuate
FLORIDA STATE・1 DAY AGO
The Guardian

Denmark’s Queen Margrethe, Europe’s only reigning queen and the continent’s longest serving monarch, has stripped four of her eight grandchildren of their titles, the palace announced. The official reason was to allow the four children of her youngest son, Prince Joachim, to live more normal lives, and...
EUROPE・2 DAYS AGO

Seth Meyers looked ahead to several major questions for the House January 6 committee on Wednesday evening, including whether to subpoena Donald Trump himself. “I gotta be honest, if I was on the committee, I’m not sure where I would land on the question of whether to subpoena Trump,” the Late Night host said.
POTUS・1 DAY AGO
The Guardian

In his first White House meeting with a major foreign leader, Donald Trump asked Theresa May: “Why isn’t Boris Johnson the prime minister? Didn’t he want the job?”. At the time, the notoriously ambitious Johnson was foreign secretary. He became prime minister two years later, in 2019, after May was forced to resign.
POTUS・2 DAYS AGO
The Guardian

In a meeting supposedly about campaign strategy in the 2020 election, Donald Trump implied his son-in-law and senior adviser, Jared Kushner, might be brutally attacked, even raped, should he ever go camping. “Ivanka wants to rent one of those big RVs,” Trump told bemused aides, according to a new book...
POTUS・2 DAYS AGO
The Guardian

The Florida governor passes the hat for disaster relief.
FLORIDA STATE・2 HOURS AGO
The Guardian

Eight-and-a-half years after Vladimir Putin announced the annexation of Crimea, he gathered the elites of Russia in the Kremlin’s St George Hall for another land-grab ceremony: this time laying claim to four more Ukrainian regions. The annexation formalities were preceded by an angry, rambling speech that dwelled only briefly...
POLITICS・21 HOURS AGO
The Guardian

The debate over this case has been delayed but must happen, says former Metropolitan police officer Leroy Logan
PUBLIC SAFETY・1 DAY AGO