Manchester City’s Caroline Weir: ‘I always try a little dink. I practise it a lot’ 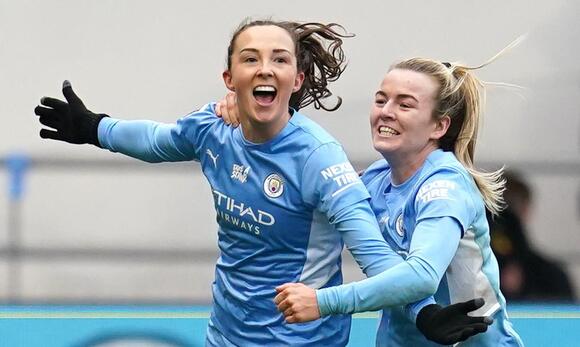 When Caroline Weir came off the bench in the first of back-to‑back Manchester derbies three weeks ago and found herself, six minutes later, in an almost identical position to the one the Manchester City midfielder was in for her Puskas award‑nominated chip last year, it was all instinct.

“At practice, when I see that area just outside the box, on that angle, it’s subconscious that I always try a little dink,” the 26-year-old says. “I try it in training and in every match-day warm-up, in the shooting. It’s something I practise a lot so when I tried it again, I wasn’t overly surprised. They definitely don’t all come off.”

Related: Tottenham’s Ashleigh Neville: ‘It’s great being a mum but tiring at times’

This one did – another spectacular goal sinking Manchester United in the Women’s Super League – and City followed that by coming from behind to beat the same opponents 4-1 in the FA Cup. Weir scored again and it points to solid preparation for Saturday’s Continental League Cup final against Chelsea at a sold-out Plough Lane.

There was a lot of emotion in the first of those two wins. It ensured City remain in the hunt for a place in next season’s Champions League after the first third of their campaign was derailed by injury.

“We did an analysis session a few days ago and my goal was part of it,” Weir says. “I wasn’t even watching my celebration, or the players that came to me – it was all the other players that were celebrating. Keira [Walsh] had done a knee slide to the City fans, Ellen [White] is just like this [arms aloft and screaming] in front of that whole stand behind the goal.

“That’s probably the best atmosphere I’ve seen in our Academy Stadium, in terms of how many people were there and how noisy it was. We’ve come such a long way, with Covid, and I think that made it extra special.”

The poor start to the season, with six defeats between August and December, including being knocked out of Champions League qualifying, was “challenging”, Weir says. “There was such a mix of things going on with injuries and fatigue from the Olympics. I definitely felt that not just physically but mentally, and I was one of the few players that was still fit. So, having to try and perform and get to the level when things weren’t going so well was challenging. We just had to weather that storm and I think we did that.”

The manager, Gareth Taylor, and the tactics were queried by many outside the club. “We’re all on social media, you can see things, but you’ve got to ignore what’s being said, and I don’t think we brought that into our bubble at all to be honest,” Weir says.

“Of course people are going to have their opinions and when results aren’t going too well people will say certain things, but all we care about is coming into training and what happens within this building and actually it’s quite easy to block everything else out because you’re sticking together.”

That mentality brought the group closer. “As much as it’s difficult at the time, it does make you stronger as a team. It is a cliche that the harder moments you learn more from but you actually do. We knew it was a matter of time, of getting everyone fit and of still focusing on what it is we want to do. So training properly, sticking to how we want to play, the manager believing in what it is we want to do, and everyone being on board with that. So that’s what we did. And hopefully we are on a better path now and can finish the season strong.”

Although the cup final is next, every game is a cup final, with City needing to not drop points to stay in the hunt for third.

“No matter who we play now, we need to win,” says Weir. “It just so happens that the next game is a cup final. It’s all about keeping this momentum. There’s no better way to do that than go and win a final.”

Beating Chelsea to swing momentum behind that push will not be easy. City have lost twice to the Continental Cup holders in the league this season, a bruising 4-0 in November and 1-0 last month . “That November game feels like a long time ago,” says Weir, a Scotland international. “We’re in a totally different place now. Even just the number of players we have available now is so much bigger, which is a huge bonus.”

Since returning from injury in January Weir has started three times and begun four matches on the bench, including both derbies. “You want to be starting games, especially the big ones,” she says. “At the same time, you’ve got to respect the manager’s decision and wait for your opportunity.

“I think, maybe up until the last few games, I’m probably one of the least impactful subs you can have, just because of the type of player I am: I need the ball, I need to kind of find a rhythm within the game. Usually that comes from being on the pitch from the start. But the last few games I have managed to impact games and score and help the team. I’m not sure it’s something I want to do all the time but if that’s the position I’m in on a match day then you’ve just got to make the best of it when you get your chance.”

I thought it would be fun to have a fantasy football match between northern and southern-born players. But where to draw the border?
PREMIER LEAGUE・8 HOURS AGO
The Guardian

Tainted Qatar 2022 is unlikely to be won by Gareth Southgate’s side, but lose in the wrong manner and it could cost him his job
UEFA・3 HOURS AGO
The Guardian

My least favourite game: our writers pick out their worst football matches

Governor says there have been many 911 calls from residents trapped in their homes by flood waters, as president makes federal funds available to help
FLORIDA STATE・26 MINUTES AGO
The Guardian

It may never be possible to determine definitively whether Monday’s underwater explosions at the two Nord Stream gas pipelines were the work of Russian sabotage, but it is certainly the way to bet. The incidents took place close to – but just outside – the 12-mile territorial waters of...
ECONOMY・1 DAY AGO
The Guardian

The renowned US big-mountain skier Hilaree Nelson has gone missing on a trek in the Himalayas after apparently falling into a 2,000ft crevasse. Nelson and her partner, Jim Morrison, had scaled the 26,781ft peak of Manaslu mountain on Monday morning. Jiban Ghimire of Shangri-La Nepal Treks, which organised the expedition, told Outside Magazine that the pair reached the summit at 11:30am local time.
PUBLIC SAFETY・1 DAY AGO
The Guardian

Basketball’s world governing body has opened an investigation after players on the Mali women’s team were filmed physically fighting one another following their World Cup loss to Serbia in Sydney. The scuffle between Salimatou Kourouma and Kamite Elisabeth Dabou broke out during a post-match interview with Serbia’s Sasa...
WORLD・2 DAYS AGO
The Guardian

Bridges plays an ex-CIA agent who has been in hiding for decades. Now, he’s paranoid old enemies are out to get him. Are they? Of course!
TV & VIDEOS・1 DAY AGO
The Guardian

Host speaks at funeral of Ralph ‘Sonny’ Barger, leader of the group considered by the DoJ to be linked to organised crime
POLITICS・2 DAYS AGO
The Guardian

A Russian draft officer has been shot by a man angry at his friend’s conscription and another man has set himself on fire in a protest as opposition to Vladimir Putin’s announcement of a mobilisation for the war in Ukraine grows. Protests also continued for a third day...
PUBLIC SAFETY・3 DAYS AGO
The Guardian

Alexandra, 37, a lawyer from Moscow, appeared to almost astonish herself as she said it. Perhaps it was the first time she had, out loud. “We have left our house, our car, our lives – everything.”. Looking down at the top of the blond head of her small...
POLITICS・1 DAY AGO