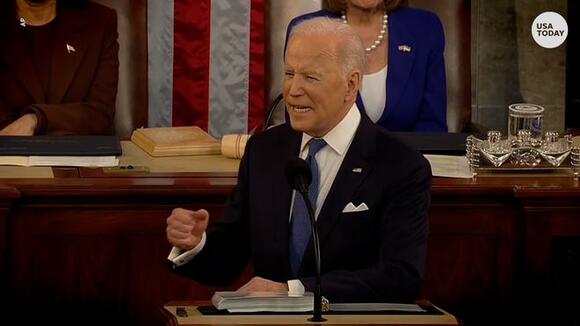 Large numbers of Americans continue to lose their lives to COVID-19.

Americans are divided politically like never before, with large numbers of Republicans continuing to rally around a former president, also a potential future candidate, Donald Trump, who refuses to acknowledge that he lost the 2020 election.

And last week the United States was unable to deter Russian President Vladimir Putin from launching a brutal attack on Ukraine.

So was President Biden reaching a little when he referred to the “State of the Union” as “strong” in his address Tuesday night?

U.S. Rep. David Cicilline says the president was correct to say the union is “strong” because “the American people are strong.”

“I think his speech hit the right tone," Cicilline said Wednesday. “It acknowledged the challenging moment we're in, the tremendous progress he made.”

In his outlook on the Ukraine situation, Cicilline said he sees strength in the president’s leadership, the Western alliance and the sanctions imposed on Russia.

He called them “crushing” and said he believes they will weigh heavily on Russian’s oligarchs and power elite.

"They're going to put pressure on Vladimir Putin and realize this is not going to end well," he said.

Cicilline, who has visited Ukraine, says the world “has now seen ... the strength and the resilience and the determination of the Ukrainian people.”

“We have to make sure they have all the help that they need to prevail in this fight,” he said.

When he was asked if the president has been progressive enough, Cicilline focused on the Build Back Better legislation that failed to win passage in the Senate last year.

"I always think that progressive refers to core Democratic values," he said. 'If you look at Build Back Better, those are extraordinary: Child care, paid family leave, support for small businesses, a serious attack on the climate crisis. It provides substantial help to working families, which I would consider progressive."

Cicilline said every provision in the legislation is "wildly popular" with "working people."

What does the progressive response to President Biden's State of the Union address mean?

Now, he said, Democrats just need to get a better read on what was problematic for the two holdouts in the party.

Former President Donald Trump wrote Thursday on social media that he cannot be sued for fraud because he repaid loans borrowed from lenders "in full on or before the due date" or is still repaying them. Trump was responding to a civil lawsuit announced on Wednesday by New York Attorney...
PUBLIC SAFETY・2 DAYS AGO
Business Insider

Liz Cheney said she'll do "everything I can" to ensure Trump is not a 2024 presidential nominee. Speaking at Texas Tribune Fest, she said if Trump is the GOP candidate, she "won't be a Republican." The recently primaried vice chair of the Jan 6 committee has historically voted conservatively. Speaking...
WYOMING STATE・21 HOURS AGO
Salon

President Joe Biden surprised viewers Friday when pausing his speech to acknowledge a woman in the crowd he said he knew when she was 12. “You gotta say hi to me,” Biden said during a speech at the National Education Association headquarters in Washington, D.C. “We go back a long way. She was 12 — I was 30. But anyway, this woman helped me get an awful lot done.”
WASHINGTON, DC・2 DAYS AGO

An ex-US Army general who witnessed Russia's basic training of recruits says it was awful, and the 'newbies' being drafted face disaster on the front line

A former US Army general said that Russia's announced mobilization of 300,000 reservists was a "jaw-dropping" sign of weakness. Mark Hertling, who commanded the US Army Europe, explained in a Twitter thread that he has personally witnessed how the Russian army is "poorly led and poorly trained." The poor training,...
MILITARY・1 DAY AGO
TheDailyBeast

Vladimir Putin’s defense minister sent a clear message to the people of Russia on Wednesday: Their country is at war not just with Ukraine, but with the entirety of the West. “I cannot but emphasize the fact that today, we are at war not so much with Ukraine and...
POLITICS・4 DAYS AGO
Business Insider

Ted Cruz said Republicans don't criticize Donald Trump because he "punches them in the face" for it. Cruz said many Republicans asked themselves how to "deal with Trump" and his incendiary political style. Cruz also praised policy achievements under Trump, who was once a staunch opponent that insulted his wife.
AUSTIN, TX・1 DAY AGO
Newsweek

A video purportedly showing a Russian fighter jet fall from the sky has been widely shared online after Ukrainian forces claimed to have shot down four planes in a single day. The Ministry of Defense of Ukraine claimed that on Saturday, September 24, two Russian Su-25 jets had been destroyed alongside an Su-20 and Su-34 plane.
MILITARY・12 HOURS AGO

President Biden’s statement this week that it “remains to be seen” if he’ll run for reelection has prompted more Democratic chatter about whether they’ll have a different candidate for the White House in 2024. If Biden doesn’t run again, a number of Democrats are expected...
PRESIDENTIAL ELECTION・1 DAY AGO
The Hill

Ukrainian President Voldymyr Zelensky on Sunday said his troops are seeing “positive results in several directions” amid fighting in several regions across the eastern part of the country. In a national address, Zelensky said Ukrainian troops were making gains in the regions of Donetsk, Kherson, Kharkiv, Mykolaiv and...
MILITARY・21 MINUTES AGO