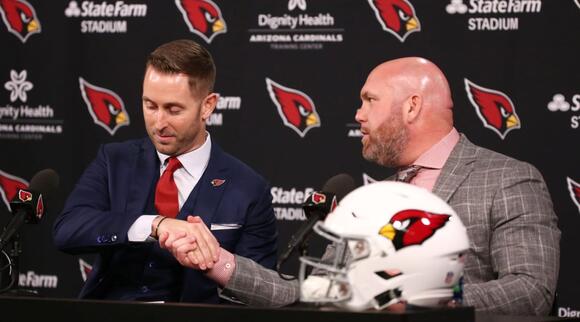 Arizona locked down the two franchise leaders through 2027.

The Cardinals agreed to contract extensions with coach Kliff Kingsbury and general manager Steve Keim that will keep both franchise leaders in Arizona through the 2027 season, the team announced Wednesday .

“The leadership of both Steve and Kliff have been key factors in the team’s turnaround over the last three seasons,” Cardinals owner Michael Bidwill said in an official release . “We are all looking forward to continuing that progress and recognize these two individuals will be a big part of achieving our long-term goals as an organization.”

Under the leadership of Kingsbury and Keim, Arizona went 11–6 in 2021 and made the playoffs for the first time since the 2015 season. The Cardinals lost in the first round of the postseason to the Rams, who went on to win the Super Bowl.

Keim is heading into his 10th season as the GM of the Cardinals and his 24th within the organization. Kingsbury is set to enter his fourth year with the franchise, after coming to Arizona from Texas Tech in 2019.

During Kingsbury’s tenure, the Cardinals are 24-24-1 and have shown improvement in each year. Arizona went from five wins in 2019 to eight in 2020 and then to 11 this past season.

With the contract extensions of Kingsbury and Keim now out of the way, the Cardinals can turn their focus to locking down quarterback Kyler Murray for the foreseeable future. The 24-year-old, former No. 1 pick has expressed interest in an extension with his agent Erik Burkhardt releasing a firm statement on Monday, urging Arizona to prioritize a deal for his client.

“Looking ahead, Kyler believes that in order to consistently compete for championships, and ultimately deliver the valley their first Super Bowl in 33+ years, there needs to be long term stability for both the organization and himself,” the statement read.

For more Cardinals news, head over to All Cardinals .

It’s the sound of hearts breaking across Philadelphia and the state of Pennsylvania… and let’s be honest, everywhere else in the country, too. Eagles quarterback Jalen Hurts made a very rare public appearance with his girlfriend Bryonna “Bry” Burrows after the NFC Championship game this past Sunday, which is a surprise to many fans, as he is extremely private about his life outside of football.
PHILADELPHIA, PA・1 DAY AGO
Sports Illustrated

With tears in his eyes, the Cincinnati defensive end addressed what he was thinking on the play.
CINCINNATI, OH・2 DAYS AGO
Sports Illustrated

It wasn’t the ruling (which was correct) or the rule (which makes sense) that bothers us. No, what bothered us was the punishment the Bengals received late in Sunday’s game.
CINCINNATI, OH・2 DAYS AGO
OnlyHomers

The college basketball world is mourning the loss of a legend this week following the death of a longtime coach that led one small school to historic highs in the NCAA Tournament.
HARRISONBURG, VA・16 HOURS AGO
Sports Illustrated

Now that he’s retired, Fox has a dilemma regarding its No. 1 NFL booth.
19 HOURS AGO
Sports Illustrated

The greatest quarterback of all time always knew how to make the correct decision on the field. So it's no surprise that he ended his career at precisely the right moment.
MICHIGAN STATE・19 HOURS AGO
Sports Illustrated

Cameras caught the linebacker screaming in frustration while walking to the locker room after the AFC championship game.
CINCINNATI, OH・2 DAYS AGO
Sports Illustrated

They seem to be sick of people talking about it already.
17 HOURS AGO
Sports Illustrated

The Dallas owner shared his opinion on the top signal-caller in Mobile this week.
DALLAS, TX・8 HOURS AGO
Sports Illustrated

The five-star recruit previously committed to Florida before being released.
TEMPE, AZ・14 HOURS AGO
Sports Illustrated

The Raiders quarterback will get the chance to have his Las Vegas swan song this upcoming weekend.
LAS VEGAS, NV・1 DAY AGO
Sports Illustrated

The final pick of the 2022 draft led San Francisco to within a win of the Super Bowl.
SAN FRANCISCO, CA・2 DAYS AGO