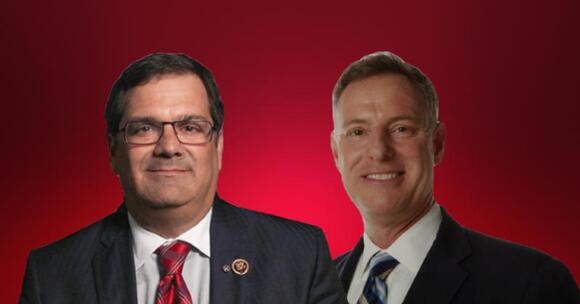 U.S. Rep. Gus Bilirakis, R-Fla., and U.S. Rep. Scott Peters, D-Calif., were able to get their “Suicide and Threat Assessment Nationally Dedicated to Universal Prevention (STANDUP) Act,” a proposal to “encourage schools to implement evidence-based suicide prevention training for students in grades 6 through 12,” through Congress.

The House passed the bill on a voice vote back in May and the U.S. Senate passed it in February.

Peters first introduced the bill in June 2020 and the House passed the measure on a voice vote in September 2020. However, the Senate did not clear the companion bill championed by then U.S. Sen. Cory Gardner, R-Col.

At the end of January 2021, Peters and Bilirakis brought the bill back. More than a dozen members of the House, including U.S. Reps. Val Demings, D-Fla., Ted Deutch, D-Fla., and Frederica Wilson, D-Fla., co-sponsored the proposal. This week the Senate passed the measure from U.S. Sen. Maggie Hassan, D-NH, which was co-sponsored by U.S. Sen. Joni Ernst, R-Iowa, without opposition.

“The bill requires states, schools and tribes to implement common sense, evidence-based policies to prevent suicides in order to receive Project AWARE grants, which boost youth mental health awareness among schools and communities. The bill applies to grades 6 through 12, and would equip teachers, administrators and students with the skills they need to identify, intervene and get help for people who are at risk of harming themselves or others,” noted Peters’ office when he first introduced it.

The congressmen insisted their bill is needed more than ever due to the current pandemic.

“While studies are ongoing, new reports indicate that COVID-19 has exacerbated children’s and teens’ anxiety, depression and isolation – stressors commonly associated with suicide. Mental Health America recently identified that those 11 through 17 years old are now at higher risk of anxiety and depression. Their summer youth screening revealed a 14 percent increase in youth anxiety and a 10 percent increase in youth depression since their previous report. Additionally, the Centers for Disease Control and Prevention (CDC) released 2020 data showing a 31 percent increase in mental health-related hospital visits in children aged 12-17 years compared to previous years,” Bilirakis’ office noted.

“Among the alarming mental health challenges facing the nation’s youth, recent trends in suicidal ideation, self-harm, and violence are cause for particular concern. The good news is that our STANDUP Act, once signed into law, will help equip students and educators with skills necessary to identify, intervene, and get help for those at risk of harming themselves or others,” said Peters. “I want to thank my congressional partners – Representative Bilirakis and Senators Hassan and Ernst – and Sandy Hook Promise, who helped push this life-saving effort across the finish line. We all want our kids to have a safe, inclusive learning community and know this legislation will help achieve that goal.”

“There is no higher priority than keeping our children safe. By providing high quality screening and prevention training to school staff and peers, we can identify threats before they materialize, and ensure that those who are at risk get the mental health treatment they need, said Bilirakis. I’ve seen first-hand how effective these programs can be when I visited a high school in Pinellas which has already implemented these best practices. Sadly, some communities in my district are among those with the highest suicide rates in our state, and the pandemic has only exacerbated the problem. By sending the STANDUP Act to the President for signature, we can better implement this training and begin to reverse these troubling trends of youth suicide and violence.”

More than 50 groups, including Sandy Hook Promise, backed the proposal which is now headed to President Joe Biden’s desk.

Last week, two Democrats in the Florida delegation on Capitol Hill–U.S. Reps. Sheila Cherfilus-McCormick and Frederica Wilson–urged President Joe Biden to pursue an “extension and redesignation of Temporary Protective Status (TPS) for Haitian migrants, and a moratorium on deportations to Haiti.”. The congresswomen led a letter to...
FLORIDA STATE・8 DAYS AGO
FloridaDaily

At the end of last week, almost every member of the Florida congressional delegation in the U.S. House, led by U.S. Rep. Darren Soto, D-Fla., sent a letter to President Joe Biden, urging the president to approve individual assistance for all 67 counties in Florida in the wake of Hurricane Ian.
FLORIDA STATE・4 DAYS AGO
FloridaDaily

Insisting that Zhou Deyong, a Falun Gong practitioner, was detained by the Chinese Communist Party (CCP) and imprisoned under bogus charges last year, members of the Florida delegation are going to bat for him. This week U.S. Sens. Marco Rubio, R-Fla., and Rick Scott and U.S. Reps. Gus Bilirakis, R-Fla.,...
FLORIDA STATE・7 DAYS AGO
FloridaDaily

A new poll from Mason Dixon shows U.S. Sen. Marco Rubio, R-Fla., ahead of U.S. Rep. Val Demings, D-Fla. Rubio takes 47 percent, with Demings behind at 41 percent, while 2 percent back other candidates and 10 percent are undecided. That shows little change from a February Mason Dixon poll which had Rubio ahead 49 percent to 42 percent.
FLORIDA STATE・2 DAYS AGO

On Thursday, U.S. Rep. Gus Bilirakis, R-Fla., said President Joe Biden should have covered the entire state of Florida in his disaster declaration instead of just nine counties. “Despite the entire Florida federal delegation asking President Biden to declare all 67 counties a designated disaster area, the president only included...
FLORIDA STATE・6 DAYS AGO
FloridaDaily

At the end of last week, U.S. Sens. Marco Rubio, R-Fla., and Rick Scott, R-Fla., sent a letter to U.S. Sens. Patrick Leahy, D-Vt., and Richard Shelby, R-Ala., the chairman and ranking Republican of the U.S. Senate Appropriations Committee, requesting their support in developing a disaster supplemental to provide assistance to Florida as Floridians recover from Hurricane Ian.
FLORIDA STATE・3 DAYS AGO
FloridaDaily

For Republicans to take control of the United States Senate after the midterm elections, they need to gain a net of just one seat. Yet several election modelers give the Democrats at least a two-thirds chance to keep control. Why have the GOP’s Senate chances been relegated to a one-in-three...
GEORGIA STATE・8 DAYS AGO
FloridaDaily

U.S. Sen. Marco Rubio, R-Fla., who sits on the U.S. Senate Foreign Relations Committee, is backing the efforts of U.S. Sen. Bob Menendez, D-NJ, the chairman of the committee, to cut off security assistance to Azerbaijan. On Tuesday, Menendez introduced a resolution “condemning Azerbaijani forces’ illegal and unprovoked assault on...
FOREIGN POLICY・8 DAYS AGO
FloridaDaily

FEMA Administrator Deanne Criswell announced on Wednesday that President Joe Biden made additional disaster assistance available to the state of Florida by authorizing an increase in the level of federal funding for debris removal and emergency protective measures undertaken in the state of Florida as a result of Hurricane Ian beginning Sept. 23, 2022 and continuing.
FLORIDA STATE・4 HOURS AGO
FloridaDaily

Last week, Congress passed a temporary funding measure that includes more aid to Ukraine and ensures there would not be a federal shutdown this week. The U.S. Senate passed the measure on a 72-23 vote. U.S. Sen. Marco Rubio, R-Fla., did not vote due to the hurricane that impacted Florida last week while U.S. Sen. Rick Scott, R-Fla., voted against it. The U.S. House passed the measure on a 230-201 vote with 10 Republicans joining the Democratic majority to support it with party lines holding firm in the Florida delegation. The bill keeps the federal government funded through the middle of December.
FLORIDA STATE・2 DAYS AGO
FloridaDaily

A South Florida congressman is wondering why a company with close connections to the Chinese regime is buying land near an Air Force base in North Dakota. U.S. Rep. Carlos Gimenez, R-Fla., led almost 50 U.S. House Republicans in a letter to U.S. Defense Sec. Austin Lloyd, U.S. Agriculture Sec. Tom Vilsack and U.S. Treasury Sec. Janet Yellen “raising concerns over the recent acquisition of farmland near a U.S. military installation by a Chinese-based manufacturer with close links to the Chinese Communist Party (CCP).”
AEROSPACE & DEFENSE・7 DAYS AGO
FloridaDaily

This week, the U.S. Department of Health and Human Services (HHS) announced it will send $300,000 to the Florida Department of Health. The funds are going to states from which “will help pediatricians meet children’s mental health needs, strengthen children’s mental health services in emergency departments and schools.” The funds will ho through the Health Resources and Services Administration (HRSA).
FLORIDA STATE・8 HOURS AGO