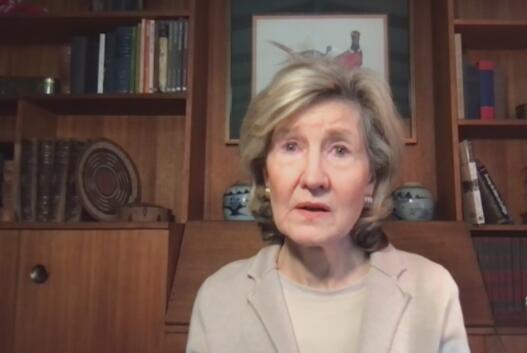 Hutchison, who also served as a Republican U.S. Senator of Texas warned Friday that more trouble could be ahead if the United States and its European allies don’t come down hard on Russia now.

“Right now, we are seeing a Cold War. But what we need to do is prevent a hot war. And how we act in this Cold War period with Ukraine will determine if we are going to get into a hot war, which would be so much more dangerous for America.”

She said Russian President Vladimir Putin is testing the U.S. and its allies.

Ukraine is a NATO partner not a member, so the United States and NATO won’t send troops to defend that nation.

If Russia were to invade another country that is a NATO member, Hutchison said American troops would be among those sent to defend that country from Russia. “Any invasion of a NATO country will cause that to happen. So we’re looking out ahead, and the Europeans need to come to the table with us.”

Hutchison also believes the U.S. should sell its liquified natural gas to Europe. “We need to provide our European allies the gas they need so they don’t have to rely on Russia and have that leverage that Russia holds.”

CBS 11 emailed the U.S. Department of Energy Friday afternoon to see if the U.S. is considering exporting liquified natural gas to Europe but we didn’t hear back.

Hutchison said Putin needs to pay a price for his invasion into Ukraine and said that didn’t happen after he invaded Georgia in 2008 and annexed Crimea in 2014.

Former President Trump responded Wednesday to Russian President Vladimir Putin’s hinting at being willing to use nuclear weapons in Ukraine, saying that the conflict should never have happened and that it could lead to a world war. Trump said on his social media platform Truth Social that the conflict...
POTUS・5 DAYS AGO
Newsweek

The Russian state TV host agreed with Vladimir Putin that Russia would be prepared to use nuclear weapons if they felt it was necessary to defend their country.
MILITARY・3 DAYS AGO
The US Sun

UKRAINE has identified the Russian colonel who is alleged to have ordered troops to torture civilians for weeks and loot homes in occupied Kherson. Ukraine's security service, the SBU, named Oleksandr Naumenko of the Rostov Guards Department as the alleged culprit. The publication of the SBU report today uncovered that...
MILITARY・2 DAYS AGO
The Independent

A Russian propagandist has claimed Vladimir Putin should have nuked Queen Elizabeth II’s funeral, while all the “best people” were gathered in London. Olga Skabeyeva, dubbed the Kremlin’s “Iron Doll”, made the claims on Monday during a discussion with Andrey Gurulev, a military commander and Member of the State Duma.
EUROPE・5 DAYS AGO

Ted Cruz said Republicans don't criticize Donald Trump because he "punches them in the face" for it. Cruz said many Republicans asked themselves how to "deal with Trump" and his incendiary political style. Cruz also praised policy achievements under Trump, who was once a staunch opponent that insulted his wife.
AUSTIN, TX・2 DAYS AGO
The Guardian

Russians paying £25,000 for seats on private planes after war mobilisation