Mike Mickens Has Upgraded Notre Dame's Corner Talent, But Much More Is Needed 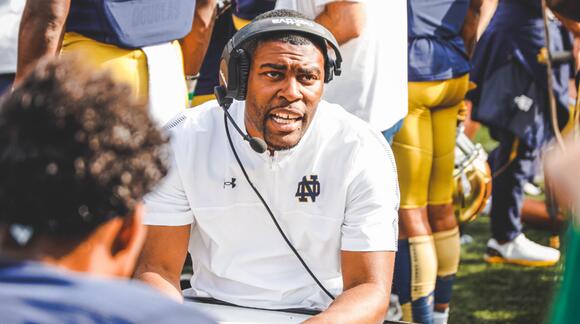 Notre Dame corners coach Mike Mickens has developed a reputation as an outstanding teacher at the position. Mickens has also had a steady impact on the recruiting trail during his career. As the primary recruiter, Mickens had a huge hit on the trail dating back to his time as the cornerback coach for the University of Cincinnati.

EARLY IMPACT ON THE TRAIL

If you look up pretty much every 2022 NFL mock draft floating out there, one name is consistently in the first round of everyone at the cornerback position, Cincinnati star cornerback Ahmad “Sauce” Gardner. Gardner wasn't much of a recruiting, ranking as the 1,672 player nationally on the 247Sports composite list coming out of Detroit (Mich.) King.

Mickens clearly saw something in Gardner, who would eventually develop into one of the outstanding defensive backs in all of college football. Notre Dame needs Mickens to have similar success finding talented, high-ceiling corners at Notre Dame.

His first full class was impressive, with Mickens landing Ryan Barnes, Philip Riley and Chance Tucker. His second class was even better. with Mickens and the Irish landing Benjamin Morrison, Jaden Mickey and playing a role in the pickup of Jayden Bellamy.

Morrison and Mickey were both four-star recruits, with Morrison grading out as a Top 100 recruit on the Irish Breakdown board and Mickey finishing his career as the No. 146 overall player on the On3 consensus rankings.

Mickens has had good results, but in 2023 and beyond the Irish must take cornerback recruiting to an even better level. If he can build on the Morrison/Mickey class the Irish could start to establish much greater consistency at the position. When competing against the nation's best teams there is no doubt that Notre Dame must get better play at cornerback than it has in recent seasons.

Mickens is off to a strong start, landing a commitment from Las Vegas (Nev.) Bishop Gorman cornerback Justyn Rhett, the No. 53 player in the country according to Rivals.

Key for Mickens is making sure he adds another corner in the class that is on the same level. The current roster boasts a notable starter in Cam Hart, but there are substantial question marks outside of him, and there's no guarantee Hart is on the roster beyond the 2022 season.. An influx of talent to the room is needed.

There are several talented players on the board for Notre Dame at the position. The staff is very high on Tulsa (Okla.) Booker T. Washington two-way star Micah Tease, who brings a lot of explosiveness and natural playmaking skills to the position. The Sooners are going to put up a good fight here but Notre Dame has put themselves in a sound position for the nation's No. 121 overall player (247Sports).

The staff also likes Coppell (Texas) High School defensive back Braxton Myers, who 247Sports ranks as the No. 106 overall player in the country. Depending on what program you ask, Myers is viewed as either a cornerback or a safety. The Irish thinks he has more than enough athleticism and length to work outside, presenting substantial upside as a press man heavy cornerback. Potentially combining those skills with Rhett gives the defense a lot of possibility to be physical.

Notre Dame is going to keep a continued relationship with Dallas (Texas) South Oak Cliff cornerback Malik Muhammad, a consensus Top 100 recruit that On3 ranks as the No. 14 player in the land and the second best cornerback. He would be a welcomed addition to class, presenting arguably the best press skills in the entire class.

The Irish are also trying to get more involved with Arlington (Texas) Martin five-star corner Javien Toviano. Until he visits, however, he must be considered a long shot.

It is up to Mickens to capitalize on the board and what is a very good 2023 cornerback group. He has already established a great reputation as a teacher and has some early recruiting wins. His impact in 2023, however, will set the standard at the position for this Notre Dame team moving forward.

Become a premium Irish Breakdown member, which grants you access to all of our premium content and our premium message board! Click on the link below for more.

Former Notre Dame standout Jayson Ademilola impressed at the NFLPA Bowl as he prepares for the 2023 NFL Draft
SOUTH BEND, IN・11 HOURS AGO
IrishBreakdown

Here is the latest news from this past week from Notre Dame football recruiting
SOUTH BEND, IN・17 HOURS AGO
IrishBreakdown

The Fighting Irish had held at No. 7 the previous three weeks
NOTRE DAME, IN・8 HOURS AGO
IrishBreakdown

Short-Handed Notre Dame Falls to NC State On The Road

Whatever Notre Dame needs from him, former Princeton linebacker Cole Aubrey is ready to contribute
SOUTH BEND, IN・2 DAYS AGO
IrishBreakdown

The Fighting Irish will play at NC State for the first time in nearly four years
RALEIGH, NC・2 DAYS AGO
IrishBreakdown