Ukraine lawmakers call on NATO to impose no-fly zone over Ukraine, saying the bloc is reaping the consequences of ignoring Putin's threats for years 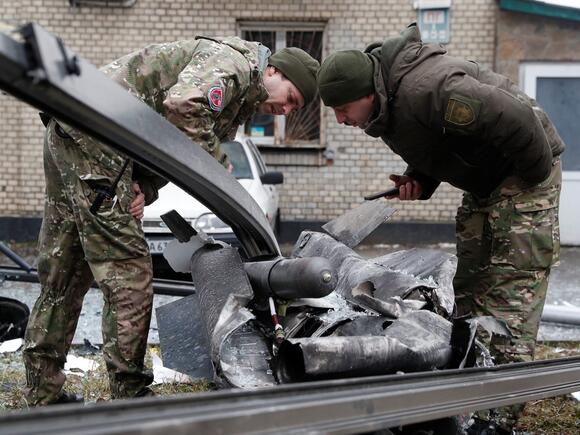 NATO must announce a military no-fly zone over Ukraine in response to Russia's invasion , two Ukrainian members of Parliament told Insider on Thursday, saying the bloc was now seeing the consequences of ignoring President Vladimir Putin's threats for years.

Putin ordered a "special military operation" into Ukraine — effectively an invasion — early Thursday, and cities across Ukraine were subsequently hit by shelling .

'Will ... the West show their inability to oppose one of the greatest dictators?'

Speaking to Insider by phone from Kyiv on Thursday, Kira Rudik, the leader of Ukraine's Holos political party, and Ivanaa Klympush of the European Solidarity party said Western sanctions had not worked and called for a no-fly zone.

If NATO imposed a no-fly zone over Ukraine, it would effectively mean that the bloc's members, including the US and UK, would be authorized to shoot down any Russian aircraft that enter Ukrainian airspace. Both the US and UK have sent military aid to Ukraine but have so far declined to send troops into the country.

Klympush told Insider it was time to "immediately" discuss imposing a no-fly zone.

"It's about actually sending more military capabilities to Ukraine through any land corridor, and preparing to send troops to Ukraine at some point," she said. "All of those things have been done in other parts of the world and they saved lives."

Rudik agreed, saying: "He [Putin] invaded and there are sanctions. So now what? Now the question is, are we going to receive military help, a no-fly zone over Ukraine, or will we not receive it and NATO and the West will show their inability to oppose one of the greatest dictators?"

Ukrainian President Volodymyr Zelensky also appeared to call for a no-fly zone in Thursday tweet , saying: Close the airspace! The world must force [Russia] into peace."

'We are expecting NATO to step up'

NATO previously imposed no-fly zones over Libya and Syria during active conflict in those countries. In Libya's case, NATO permitted fighter planes to "intercept any aircraft which violates the no-fly zone, and engage it if it presents a threat."

"We are expecting NATO to step up," Rudik said.

In a statement released Thursday, NATO said it was taking "additional steps to further strengthen deterrence and defense."

"We are deploying additional defensive land and air forces to the eastern part of the Alliance, as well as additional maritime assets," it said, without giving specifics.

Putin said on Thursday that the West will face "consequences greater than any you have faced in history" if they intervened in Ukraine, and boasted about Russia's nuclear arsenal.

Klympus sent a video she had taken on Thursday morning, which showed backed-up traffic heading out of Kyiv as the invasion was underway.

'We have not been heard'

Klympush went on to say that NATO had long failed to understand Putin's ambitions for Ukraine. "We have been ringing the alarm bells for eight years, we have not been heard," she said.

"He didn't need just Crimea, just parts of Ukraine, he needs to impose his will on the international geopolitical order. He has gone mad."

Russia's conflict with Ukraine has been rumbling for years but escalated dramatically in recent weeks, with Russia assembling vast numbers of troops on Ukraine's border in the largest military operation in the region since World War II.

On Monday, Putin recognized the independence of Luhansk and Donetsk , and ordered troops there for what he described as a limited peacekeeping operation in the country's east. Less than 72 hours later, he authorized a full-scale attack on Ukraine .

Putin has long said that the peoples of Ukraine and Russia are deeply connected, and published a rambling essay with imperialist undertones on the topic last year.

Speaking to Insider, Klympush also called on Western powers to target Russia with new sanctions on its financial system.

"Its important to go even further, blocking SWIFT, Visa, Mastercard, and banking platforms for the Russian Federation," she said. SWIFT is a global network for international financial transactions used by nations, banks, and individuals.

Speaking to Insider in a separate interview on Wednesday , Rudik said the West needs to sanction "not only his [Putin's] closest circle and the Duma, but the members of their families."

"Let them come to Putin and say, 'What the hell,'" she said.

A key ally of Putin said he wants to invade Poland next, ignoring Russia's inability to capture Ukraine

Chechen leader Ramzan Kadyrov said it was his intention to turn to Poland after Ukraine, while predicting that the Ukraine war will end this year.
20 HOURS AGO
Business Insider

A Russian officer who brandished the skull of a Ukrainian soldier at a heavy metal concert was shot in an 'execution-style' hit: report

Igor Mangushev, who was filmed last year brandishing the purported skull of a slain Ukrainian soldier, was shot in the head at close range over the weekend.
2 DAYS AGO
Business Insider

China weighs in on the war in Ukraine, pushing Europe to stop trying to get Kyiv a 'complete victory' over Russia

As Kyiv pushes the West for more advanced weapons, China's top diplomat to the EU said Beijing was worried about the war with Russia escalating.
10 HOURS AGO
Business Insider

The Russian central bank has been candid about its assessment of the country's economy, which were sometimes at odds with the official stance.
1 DAY AGO
Business Insider

Marjorie Taylor Greene suggested the Pentagon may have withheld information about Chinese spy balloons from Trump, and called for an investigation.
GEORGIA STATE・1 DAY AGO
Business Insider

Ukraine says Russia faced its deadliest day in the war yet, with over 1,000 troops killed in a 24-hour period

Chairman of the Joint Chiefs of Staff Gen. Mark Milley recently said that the war in Ukraine is "turning into an absolute catastrophe for Russia."
1 DAY AGO
Business Insider

After bloody failures in Ukraine, Russians are reconsidering the role of their military's 'elite' paratroopers

The debate about the value of airborne forces isn't unique to Russia, but it's grown more intense there after VDV troops took heavy losses in Ukraine.
1 DAY AGO
Business Insider

The man admitted his guilt and is being held without bail while an investigation into him is underway.
1 DAY AGO
Daily Mail

The state-of-the-art Iron Dome missile defense system has long protected Israel's skies from missiles. It could do the same in Ukraine.
2 DAYS AGO
msn.com

Slide 1 of 41: In the latest threat to Donald Trump's 2024 campaign, a major US political donor has just signaled that he won't be backing the former POTUS's next presidential bid. And political support might not be the only thing Trump is losing. Read on for the full surprising story. All dollar values in US dollars.
2 DAYS AGO
Business Insider

China's Foreign Ministry said the craft was a lost civilian balloon, the same explanation it gave for a suspected spy balloon that drifted over the US.
NORTH CAROLINA STATE・2 DAYS AGO
Business Insider

Biden played the State of the Union perfectly, but the raucous GOP proved he's dealing with a whole new kind of opposition

The affair resembled the chaotic scenes of the UK's parliament and not the usually staid State of the Union.
GEORGIA STATE・1 DAY AGO
Business Insider

Former Israeli prime minister rebuts claim, boosted by Russia, that the US blocked a Ukraine peace agreement: 'It's unsure there was any deal to be made'

Naftali Bennett, Israel's prime minister at the start of the war, said that peace talks broke down after Russia massacred civilians in Bucha, Ukraine.
1 DAY AGO
Business Insider

China flew spy balloons over the US while Trump was president, but nobody realized until after he left office, reports say

Other suspected Chinese surveillance balloons had crossed into the US at least three times during the Trump administration, officials said.
SOUTH CAROLINA STATE・2 DAYS AGO
Jot Beat

Controversy Erupts Over Jill Biden's Grammy Appearance: A Deep Dive into the Connection with Iran Protests

The First Lady of the United States, Jill Biden, made a highly controversial appearance at the most recent Annual Grammy Awards. Her speech, which addressed the ongoing protests in Iran and the importance of supporting human rights and social change, has sparked widespread debate and has been met with mixed reactions from both the public and celebrities alike.
1 DAY AGO
Business Insider

"We're members of Congress. We have a code of ethics of how we should portray ourselves," McCarthy told CNN on Tuesday.
GEORGIA STATE・1 DAY AGO
Εκπαίδευση αυτογνωσίας

The US is sending advanced military techs, such as advanced fighter jets and aircraft carriers, to South Korea and conducting joint training with the nation. North Korea has warned that these drills may turn the region into a militarized zone and increase tensions with other countries. It claims they are preparing for nuclear strikes in its own country.
1 DAY AGO
Business Insider

Kim Jong Un returned from one of his longest-ever breaks from public view to attend a military meeting on Monday.
1 DAY AGO
Business Insider

Alina Kabaeva, suspected to be Putin's girlfriend, said Russian media was a "military weapon" ahead of the one-year anniversary of the Ukraine war.
1 DAY AGO