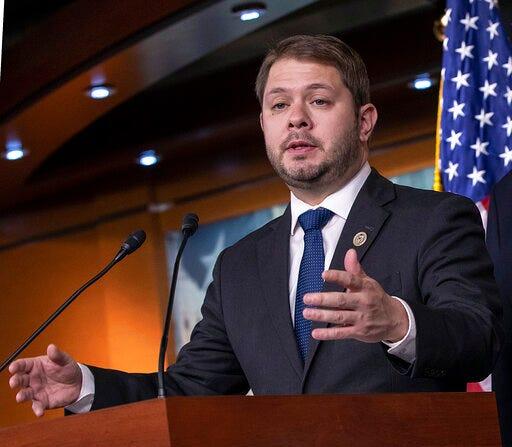 Rep. Ruben Gallego argued this week that the United States should, in conjunction with NATO, help Ukraine against Russia in order to protect U.S. national security and maintain moral standing as the world's superpower.

Hours before Russia launched a full-scale invasion of Ukraine, Gallego, D-Ariz., advocated for President Joe Biden to send military aid to Kyiv and troops to neighboring NATO countries, in addition to imposing economic sanctions on Russia as other NATO member countries have done. He said he believes that the current crisis could have been prevented if Ukraine was a part of NATO.

"The U.S. being involved now is actually probably the cheaper alternative to finding ourselves in a massive land war ... against an imperialistic Russia," Gallego said Wednesday on the closing day of the North Atlantic Treaty Organization in America conference at Arizona State University's Beus Center for Law and Society.

On Thursday about 6 a.m. Moscow time, Russian President Vladimir Putin announced a "special military operation" and, shortly thereafter, explosions were reported in Ukraine's capital city of Kyiv and other cities across the country. According to CNN, Russian troops on Thursday seized the Ukrainian island Zmiinyi, which is located in the Black Sea . As part of its continued siege against Ukraine , Russia has kept up cyberattacks and, according to a Ukrainian official, Moscow seized the infamous, now-defunct Chernobyl nuclear power plant.

As part of its invasion of Ukraine, Russia has unleashed airstrikes on cities and military bases and has sent in troops and tanks from three sides in an attack that could rewrite the global post-Cold War security order. Ukraine’s government on Thursday pleaded for help as civilians piled into trains and cars to flee.

Gallego argued that these far away events would affect Arizona and Phoenix.

"We can't forget that we have very important military installations here in Arizona that could be involved in these types of conflicts. And the goal of something like NATO, you know, is obviously to prevent conflicts as a deterrence organization," Gallego told The Arizona Republic in a media roundtable.

A Russia-Ukraine war also could have ramifications on the global economy, he said.

"We are a leader in the world. What happens in Ukraine will eventually impact us," Gallego said. "You don't want to use mileage to determine security and security norms. Afghanistan is (7,800) miles (away)."

Biden announced Thursday sanctions against four of Russia's largest banks and instituted further export restrictions as part of a global effort to punish Putin. He also levied sanctions against two dozen Belarusian people and organizations to penalize Russia's ally, another former part of the Soviet Union, that bolstered Russia's efforts in attacking Ukraine.

Thursday's announcement follows sanctions imposed earlier this week by the Biden administration, which Gallego supports, for companies doing business in the Donbas region of eastern Ukraine. On Feb. 23, sanctions started against oligarchs aligned with Putin and their relatives.

Europeans countries have also implemented sanctions against the Kremlin, including Germany ceasing progress on the Nord Stream 2 pipeline, which brings natural gas from Russia.

The financial reverberations of the sanctions may not just be felt by Russians. Russia's foreign minister, Sergei Lavrov, said in a Wednesday statement : "There should be no doubt that sanctions will receive a strong response, not necessarily symmetrical, but finely tuned and painful to the American side."

U.S. Secretary of State Antony Blinken canceled his scheduled Thursday meeting with Lavrov in Moscow in a further blow to diplomatic efforts.

After Biden declared his latest round of sanctions Thursday, the Pentagon called up 7,000 troops to Europe. Biden repeatedly has said no U.S. troops will fight in Ukraine, a stance with which Gallego agrees, but the military may serve in a supportive capacity to Ukraine. This falls against the backdrop of Biden's announcement Tuesday that troops will remain in Belarus, and that he has approved sending U.S. forces and military supplies to Estonia, Latvia and Lithuania.

While NATO itself does not have troops, member countries can send troops to be under one NATO command , such as in Kosovo in the 1990s.

"Defending freedom will have costs for us as well, here at home. We need to be honest about that," Biden said . "But as we do this, I’m going to take robust action and make sure the pain of our sanctions is targeted at the Russian economy, not ours."

Even higher gas prices on top of rising inflation would add yet another political hurdle to the Democrats already grim prospects in the 2022 midterm elections .

"I think we have to make a decision as a country," Gallego said. "Are we going to do what's morally right, which is helping an independent, sovereign democratic country defend itself? Or are we going to, you know, I would say, turn in our card as leaders of the free and democratic world in the hopes of saving some some votes in the future."

Gallego, an Iraq War veteran who sits on the House Armed Services Committee, said U.S. mistakes in Iraq shouldn't "preclude us from actually having some more responsibility when it comes to this."

"Russia is an autocratic bullying country and ... they're the bad guys. We, NATO, democratic countries, are the good guys," Gallego said. "It's OK to say that it's OK for us to fight that way."

'The worst pain I've ever felt': Ukrainian Arizonans brace for conflict with Russia

That stance is different from then-President Barack Obama's position in 2014 when Russia invaded Crimea in Ukraine. In an interview with the Atlantic, Obama said it wasn't in the U.S. interest to get involved.

“The fact is that Ukraine, which is a non-NATO country, is going to be vulnerable to military domination by Russia no matter what we do,” he said. "This is an example of where we have to be very clear about what our core interests are and what we are willing to go to war for."

Gallego said: "President Obama was wrong about that and the way he actually dealt with Russia was entirely, you know, I think weak and probably has caused problems that we see right now in terms of encouraging Russia to act in this aggressive manner."

The two-day conference, sponsored by the Atlantic Council, was designed to show the relevance of NATO to Americans outside of Washington, D.C.

NATO, an alliance formed in 1949 by the U.S. and 11 other Western countries, was established to protect itself against threats posed by the then-Soviet Union. It has since expanded to 30 countries, but Ukraine is not a member.

Putin views the expansion of NATO as a threat to Russia's security and has demanded, among other things, that Ukraine be banned from the alliance.

While Ukraine has expressed interest in joining NATO, applying for membership in 2008 , it is unlikely to do so anytime soon.

Tara Kavaler is a politics reporter at The Arizona Republic. She can be reached by email at tara.kavaler@arizonarepublic.com or on Twitter @kavalertara .

Rep. Juan Ciscomani to deliver GOP response to State of the Union in Spanish

Freshman Rep. Juan Ciscomani will deliver in Spanish Tuesday the Republican response to President Joe Biden's State of the Union speech. The response will come after Biden makes his primetime remarks. " ... My message will be simple and straightforward: the American Dream is a dream worth fighting for," Ciscomani,...
ARIZONA STATE・1 DAY AGO
AZCentral | The Arizona Republic

Opinion: Did 2022 teach conservative voters that candidates welded to The Donald don't win, or do they want a third disappointing election day in a row?. A podcast listener asked me if the fight over Arizona’s 2022 election would be settled before the 2024 election. If he had said...
ARIZONA STATE・18 HOURS AGO