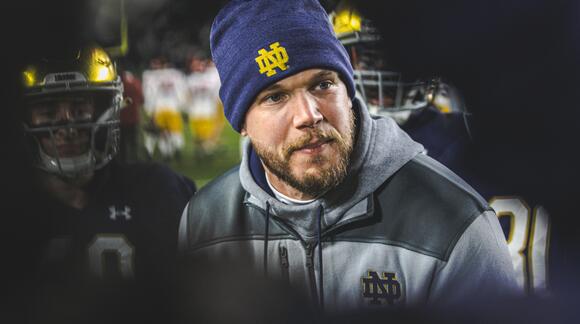 Communication is a huge part of any successful secondary in football, and based upon what was conveyed by Notre Dame’s defensive back coaching combo last week, fans should expect a far more confident group of defenders on the back end of the Notre Dame defense moving forward.

Opposing quarterbacks completed 60.8-percent of the passes attempted against the Notre Dame defense, and the Irish defense gave up 224.2 yards per game through the air. Those numbers ranked 66th and 63rd nationally during the 2021 season, and the completion percentage mark was especially troubling.

This off-season began with the Notre Dame coaching staff putting a full-court press on former Northwestern All-American safety Brandon Joseph as soon as he entered the transfer portal on December 29. This was the first step to developing the championship secondary that head coach Marcus Freeman spoke about in the aftermath of a disappointing Fiesta Bowl.

That Fiesta Bowl loss had many Notre Dame faithful questioning the defense, and plenty of focus was especially on the performance of cornerback Clarence Lewis. Freeman immediately challenged the attempts to label his secondary and Lewis after the Fiesta Bowl.

“I love C-Lew," Freeman said. "C-Lew has done great things and he’s going to do great things for us and I wouldn’t trade him for the world.”

There was no panic from Freeman and it was time to move on from the previous regime with a focus on competition and development. Corners coach Mike Mickens and safeties coach Chris O’Leary have extended those measures into the current roster and the 2023 recruiting class.

Mickens has been very pleased with the work from his cornerbacks during training and is very excited about early enrollees Jaden Mickey and Jayden Bellamy.

“Obviously you start with the competitive spirit and (they) have it," Mickens told Irish Breakdown. "It’s great to see them get out there and do it. I just want to keep molding that, because when they have the lowest part of it, I want them to still have that highly competitive spirit and confidence that they have .... There’s going to be some days that they get beat in practice, I want to see how they bounce back, and keep telling them, that hey, this is why you’re here, and get better and better and better. I love their confidence; I love how they go about their business. You can tell they’ve been preparing to come here midyear and start doing what they’re doing."

With this being the second year in Freeman’s defense and a change in culture, both coaches expect improvement with all their players. Mickens expects more responsibility to be placed on the cornerbacks in the upcoming season.

“This is year two, and these guys understand the system now," Mickens explained. "All the little nuances they were still trying to learn in year one in the spring, they don’t have to do that year two. Now, they will be able to go a little bit faster.”

The addition of Joseph gives the secondary a similar weapon to what Kyle Hamilton brought to the table for three seasons. This isn't to say that Joseph will be a top of the draft selection when he comes out, but he adds tremendous speed, talent, range and coverage ability to the safety group. His ability to cover the slot, play centerfield and make plays in the box gives new defensive coordinator Al Golden a unique weapon for his play calling.

Veteran Houston Griffith decided to return for another year and has shown great leadership along with DJ Brown during training sessions. Rising juniors Xavier Watts and Ramon Henderson continue to develop and show promise along with redshirt freshman Justin Walters.

O’Leary loves where his safety room is going into spring practices and has a clear vision for the group walking into the matchup with Ohio State on September 3.

“I want this group to be the best in the country," O’Leary told Irish Breakdown. "I always tell our guys in our room that I want four safeties that could play at any moment in the game. Four guys whether it’s the last play of the game, I trust all four. So that’s the competition. We got probably six or seven guys right now, and I want the four best to step out there."

Griffith and Joseph are just two of several Notre Dame defenders who talk often about winning a national championship. That is something O'Leary and the Irish coaches embrace.

"But what we need to focus on, and what those guys need to make sure that is critical to them is just the day-by-day focus," he continued. "The process is the process, and if we focus 100 miles an hour day in and day out, we might get there, you know? That’s where we’ll get into spring ball and all that, we’re going to lock in day by day and that’s how we’ll get to that national championship."

O'Leary and Mickens clearly like the talent of their group, but both also know their units must play much better this season. That includes improving their technique, discipline and execution, something both coaches noted during their interviews.

Notre Dame has a dynamic duo in Mickens and O’Leary, and they carry the message and confidence of Freeman’s “Golden Standard” to their rooms daily. If the Irish coaches get that improved technique and execution the Irish secondary will make a big jump in 2022, which is exactly what the defense needs to be part of a championship.

Become a premium Irish Breakdown member, which grants you access to all of our premium content and our premium message board! Click on the link below for more.

Notre Dame offensive coordinator Tommy Rees will interview for the open position at Alabama
SOUTH BEND, IN・23 HOURS AGO
IrishBreakdown

Notre Dame bounced back from its loss to NC State with a 72-59 win at Boston College
SOUTH BEND, IN・14 HOURS AGO
IrishBreakdown

Notre Dame standouts Isaiah Foskey and Jarrett Patterson showcase talent on day one but with mixed results
SOUTH BEND, IN・2 DAYS AGO
IrishBreakdown

Texas Cornerback Leonard Moore Is Ready To Make His Commitment

The Fighting Irish are looking for their first win at Boston College since 2019
SOUTH BEND, IN・1 DAY AGO