Texans Free Agency Profile: Did Chris Conley Do Enough To Re-Sign in Houston?

HOUSTON — Chris Conley's arrival in March of 2021 received little fanfare, but there was one objective the veteran wide receiver had in order to determine his success with the Houston Texans.

Conley — who signed with the Texans after a two-year stint with the Jacksonville Jaguars — was regarded as Will Filler's successor to take the helm as Houston's No. 2 receiver during the 2021 campaign.

Nearly a year after the Texans signed Conley to a one-year contract, the University of Georgia prodigy not only failed to fill the role as Houston's No. 2 receiver in the passing game. But one can argue that Conley may have been the most inefficient receiver of the year. And his lack of production could result in the Texans allowing Conley to walk in March.

"I think every team every year is a new team, regardless of the coaching staff and player changes," Conley said prior to facing his former team in September. "You see how the team is different here this year, and we’ve had the coaching staff and personnel changes. The Jags definitely will be a different team. They have some core players that they return, but every year our team has a new identity."

Although subjective, Conley may have been the most underwhelming addition general manager Nick Caserio signed via free agency last year.

Conley's on-field presence was irrelevant for most of the season, as he finished the 2021 campaign with 323 yards on 22 catches and two touchdowns in 16 games. His lone memorable play of the year came during the Texans' Week 5 loss to the New England Patriots, where Conley was the recipient of a 37-yard touchdown flea-flicker.

But Conley's most significant influence in Houston took place in the locker room, as he was one of a handful of players to guide a 4-13 Texans through an abysmal year. Mainly Conley's availability to serve as a mentor to rookie wide receiver Nico Collins.

"Just coming in from college to the NFL — it’s a whole different league," Collins said during his media press conference in December. "I’m glad I got the vets in our room. (Chris) Conley, Danny (Amendola), Chris Moore, I appreciate them for getting me ready for this opportunity.

"Whatever questions I have, they’re always there to help me out. I appreciate them a lot, being there in my corner. I’m just glad that I have them in our room together. We’re still growing as a unit, we’re still getting better."

Similar to Danny Amendola, Conley will not have a ton for suitors pursuing his serves this offseason, and the Texans can retain their veteran receiver on a team-friendly deal.

But given that Houston is entering free agency as a more attractive destination following the hiring of coach Lovie Smith, the Texans will have an opportunity to sign a receiver that can replace Conley's locker room leadership while providing the team with more production on the field. 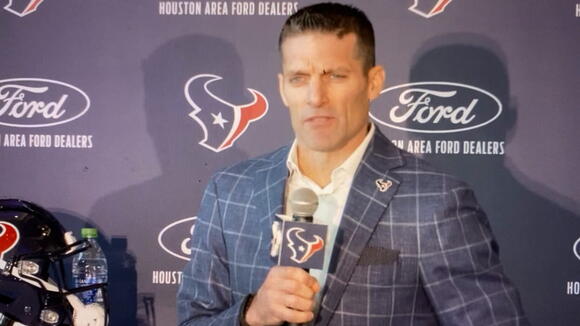 The Houston Texans are presumed to select one of the top-two quarterbacks in the 2023 NFL Draft, but has coach DeMeco Ryans helped the franchise recommit to Davis Mills?
HOUSTON, TX・1 DAY AGO
TexansDaily

Despite having other offers and candidates, the Houston Texans' hiring of coach DeMeco Ryans creates a perfect match for both sides.
HOUSTON, TX・2 DAYS AGO
TexansDaily

The Houston Texans are losing safeties coach Joe Danna, who was an underrated piece for a surprising secondary this season.
HOUSTON, TX・1 DAY AGO
TexansDaily

Given where the Texans program is right now ... do they need a $25 million wideout? Or do they need a trade of Brandin Cooks to the Cowboys or Patriots?
2 DAYS AGO
TexansDaily

Texans safety Jonathan Owens has yet to garner league-wide attention, but still might be prioritized in free agency.
HOUSTON, TX・12 HOURS AGO
TexansDaily

Building DeMeco Ryans' Texans in 5 (Not So) Easy Steps

"I've always had the Texans deep in my heart,'' said DeMeco Ryans this week upon his hire ... proof that he gets it. Now, what five steps does the new coach need to take to fix this thing?
HOUSTON, TX・5 HOURS AGO