Tigers SS prospect: 'I plan to be better' than Alan Trammell 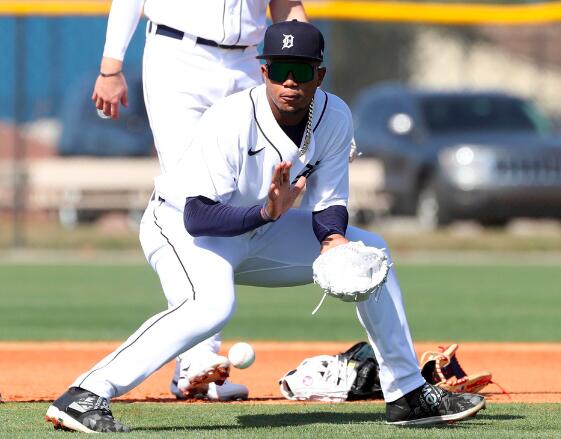 An 18-year-old shortstop in the Tigers' system plans to be better than him.

After taking infield instruction from Trammell at Tigers' minor-league minicamp Tuesday in Lakeland, Cristian Santana, who signed with Detroit out of the Dominican Republic last winter for a franchise record $2.95 million, was asked what it's like to work one-on-one with such an esteemed shortstop.

"It's an honor to play with him and learn from him. But if God allows me, I plan to be better than him," Santana told reporters through a team interpreter.

There's a reason the Tigers spent big on Santana last January, beyond his obvious confidence. After scouting him for three years, they envision him as an impact hitter in the bigs. MLB Pipeline compares Santana to former Tigers shortstop and three-time All-Star Jhonny Peralta, noting he he an "advanced approach and raw power," "quick feet" in the field and the "speed to be a plus runner." All told, a pretty darn good package.

The Tigers' No. 1 shortstop prospect and No. 9 overall according to MLB Pipeline, Santana will begin this season in the Florida Complex League, with a chance to reach Low-A Lakeland by season's end. He said his goal is to be in the majors by 2025. (Javier Baez, by the way, is signed through 2027.) His confidence, he told reporters, "is natural."

Some thing’s never change. Yes, Tony La Russa is turning 78 on Tuesday, but the Cardinalsformer manager has always been consistent. When it comes to a losing season, it’s alwaysok to blame the manager. La Russa expressed gratitude and disappointment as he announcedhe was done managing the White Sox. TKO, “The Kilcoyne Opinion” on Tony’s […]
SAINT LOUIS, MO・39 MINUTES AGO
San Diego Union-Tribune

Hunter Renfroe homered in a ninth-inning comeback and singled home the winning run in the 10th as Milwaukee rallied for a 6-5 victory over the Arizona Diamondbacks just before the Brewers' playoff hopes vanished Monday
MILWAUKEE, WI・31 MINUTES AGO
The Associated Press

CHICAGO (AP) — Tony La Russa stepped down as manager of the Chicago White Sox on Monday because of a pair of health issues, ending a disappointing two-year run in the same spot where the Hall of Famer got his first job as a big league skipper. La Russa, a three-time World Series champion who turns 78 on Tuesday, missed the final 34 games with the underachieving White Sox. He left the team on Aug. 30 because of problems with a pacemaker that was implanted in February. While La Russa was away from the team, he got checked for a different medical issue that was previously diagnosed during an annual exam. That second health problem led to his departure from the team. “Now however that I’m in the treatment program, it’s become obvious that the length of the treatment and recovery process for the second issue makes it impossible to be the manager in 2023,” La Russa said.
CHICAGO, IL・49 MINUTES AGO
San Diego Union-Tribune

Rams LB Bobby Wagner flattens protestor who gets on field