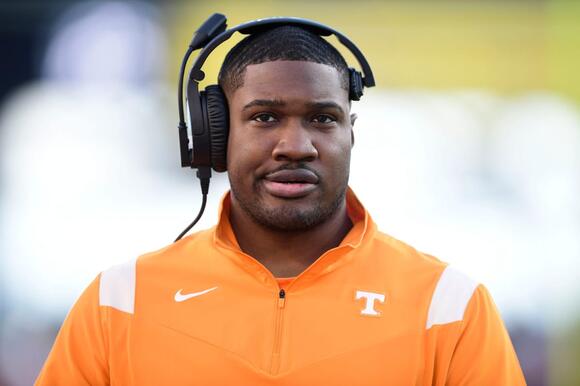 The Saints have found their new wide receivers coach, according to a Monday morning report by ESPN.

The Saints have found their new wide receivers coach. According to ESPN's Pete Thamel , New Orleans is hiring Kodi Burns, who has served at that position for the past several years after breaking into coaching in 2012 as a graduate assistant. Burns played collegiately at Auburn from 2007-2010, winning a national championship with Cam Newton in his final season.

Burns spent time with several programs before joining Tennessee in 2021, and will be replacing Curtis Johnson on Dennis Allen's staff. He has been a receivers coach since 2015, spending time with Middle Tennessee and Auburn in addition to being with the Volunteers last season.

The Saints have made several moves on the offensive side of the ball in the coaching department, as they look to improve a very rough product from last season. New Orleans needs to figure out their quarterback situation, but will also need to also upgrade at the receiver spot to really make things pop.

The Saints make a flurry of personnel moves on Tuesday that involves losing a veteran linebacker, but adding a Pro Bowl defensive back.
NEW ORLEANS, LA・2 DAYS AGO
The Associated Press

DENVER (AP) — Matt Ryan kept the faith through all the sacks, interceptions, fumbles and three-and-outs that made for a streaming snooze-fest Thursday night. “It was just kind of a slog of a game,” the Indianapolis quarterback said after Stephon Gilmore batted away Russell Wilson’s pass to Courtland Sutton in the end zone on fourth-and-1 from the 5 to give the Colts a 12-9 overtime victory over the Denver Broncos. The game featured seven field goals, a dozen punts, 25 third-down stops, four interceptions and six fumbles — none of which were recovered by the otherwise disruptive defenses. “Our defense played lights out,” said Ryan, who emerged victorious despite getting sacked six times, giving him 21 so far this season, throwing a pair of interceptions to Caden Sterns and fumbling for the 10th time this season.
DENVER, CO・26 MINUTES AGO
Sports Illustrated

For years now, the QB has been viewed as a victim of the system in Seattle. But a horrid start in Denver has us rethinking the blame game.
DENVER, CO・19 MINUTES AGO
SaintsNewsNetwork

How the New Orleans run defense matches up against an explosive Seattle running game in Week 5.
NEW ORLEANS, LA・13 HOURS AGO

Looking a bit closer at the snap counts from the Saints loss to the Vikings in London with some observations from the game.
NEW ORLEANS, LA・2 DAYS AGO
SaintsNewsNetwork

Three New Orleans players who have been injured through the first four games return to practice today, per report.
NEW ORLEANS, LA・1 DAY AGO