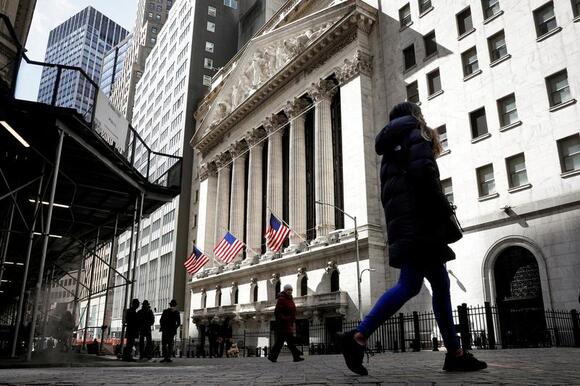 (Reuters) - S4 Capital’s Executive Chairman Martin Sorrell told The Times on Monday that he is considering a New York listing for the company.

Sorrell, in an interview with the newspaper highlighted the company’s poor performance on the London Stock Exchange and said that a New York-listing “would probably get a better valuation”.

He also added that back in 2016, when S4 Capital started, a U.S.-listing was considered but the entry costs were too expensive. However, he now believes that it has become other way given the oversupply.

As on Friday, S4 Capital’s market capitalization was at 2.7 billion pounds ($3.67 billion), according to Refinitiv Eikon data. The stock has declined nearly 25% so far this year.

Credit Suisse in market spotlight despite moves to calm concerns

ZURICH, Oct 3 (Reuters) - Credit Suisse Group AG (CSGN.S) saw its shares slide by as much as 11.5% and its bonds hit record lows on Monday before clawing back some of the losses amid concerns about the lender’s ability to restructure its business without asking for more money.
MARKETS・6 HOURS AGO
Reuters

Sheryl Sandberg gets personal security services as she leaves Meta

Oct 1 (Reuters) - Moderna Inc (MRNA.O) has refused to hand over to China the core intellectual property behind the development of its COVID-19 vaccine, leading to a collapse in negotiations on its sale there, the Financial Times reported on Saturday, citing people familiar with the matter.
INDUSTRY・2 DAYS AGO

Major U.S. airlines in no rush to resume stock buybacks as ban ends

(Reuters) - Major U.S. airlines said on Monday they have no immediate plans to resume stock buybacks after a Congress-imposed ban expired last month, amid pressure from unions to boost worker pay and fix operational issues.
ECONOMY・8 HOURS AGO
Reuters

SHANGHAI, Aug 25 (Reuters) - (This August 25 story corrects to say JPMorgan owns 49%, not 51% of CIFM, in 2nd to last paragraph) JPMorgan (JPM.N) would need to pay $1 billion for full ownership of its Chinese mutual fund venture, a statement on the Shanghai United Asset and Equity Exchange showed on Tuesday, a price tag that analysts said was expensive.
ECONOMY・14 HOURS AGO

Benetton, Blackstone's takeover of Atlantia to start on Oct. 10

Oct 4 (Reuters) - A look at the day ahead in Asian markets from Jamie McGeever. Whisper it, but markets may be in something of a sweet spot right now, opening up the potential for a few weeks of respite and decent-sized rebounds.
STOCKS・7 HOURS AGO
Reuters

BUENOS AIRES, Oct 3 (Reuters) - Argentina on Monday announced measures aimed at boosting technology exports to $10 billion in 2023, as it seeks to support growth of the "knowledge economy".
TECHNOLOGY・1 HOUR AGO
Reuters

Bank of Israel raises key rate by 3/4 point to 2.75% to quiet inflation

JERUSALEM, Oct 3 (Reuters) - The Bank of Israel on Monday raised its benchmark interest rate (ILINR=ECI) by three-quarters of a point, the fifth straight meeting it has increased rates, to try to squash inflation that remains well above its target.
BUSINESS・14 HOURS AGO
Reuters

Oct 3 (Reuters) - Wall Street stocks ended with sharp gains on Monday at the start of the final quarter of a tumultuous year with interest rate hikes amid historically hot inflation and fears of slowing economic growth.
STOCKS・7 HOURS AGO
Reuters

Exclusive-Euribor in expansion mode for first time since rigging scandal

LONDON, Oct 3 (Reuters) - Euribor is making its first push to expand the number of banks contributing to its benchmark rate, a decade after a global rigging scandal that put its very future in doubt.
PERSONAL FINANCE・14 HOURS AGO

Oct 3 (Reuters) - London's Heathrow airport has told airlines it will lift a cap on passenger numbers at its terminals later this month, the Wall Street Journal reported on Monday, citing people familiar with the decision.
WORLD・8 HOURS AGO
Reuters

MEXICO CITY, Oct 3 (Reuters) - Mexican officials on Monday announced the details of a new deal with companies to halt rising food prices, doubling down on a collaborative effort with the private sector as inflation hovers at a 22-year high.
INDUSTRY・7 HOURS AGO
Reuters

UK's Kwarteng to bring forward publication of his fiscal plan

LONDON, Oct 3 (Reuters) - British Finance Minister Kwasi Kwarteng is to bring forward publication of his medium-term fiscal plan to bring down public debt to later this month, the Financial Times and a government source said on Monday.
INCOME TAX・8 HOURS AGO