All the latest local breaking news stories from Minneapolis.

Paul Douglas: Get ready for significant travel impacts with the coming snow and cold 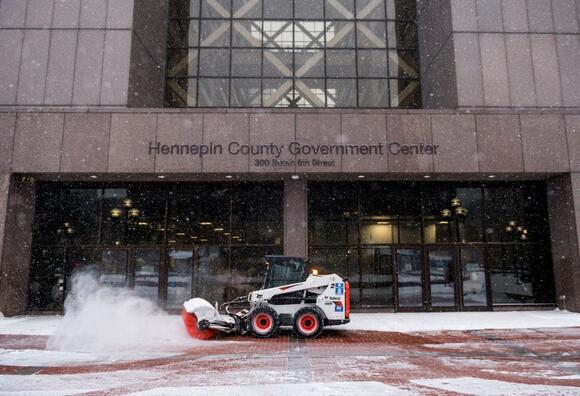 A round of heavy snow is bearing down on Central Minnesota and that is going to be followed by unseasonably cold temperatures through the week.

The Twin Cities National Weather Service says a prolonged winter storm is likely late Sunday night through Tuesday night with significant snow accumulation and areas of blowing snow.  The wind could be especially troublesome in areas outside the metro.

WCCO Meteorologist Paul Douglas says it’s too soon for specific amounts but expect it to be one of the bigger snowfalls of the winter so far.

"There is a very good chance of a plowable snowfall early next week, with a focus on accumulating powder Monday and Tuesday,” Douglas says. “This will be a long-duration snow event at fairly cold temperatures (single digits and teens), which will mean powdery accumulation. That's perfect for snow-lovers, but very difficult for commuters and MnDOT crews, because salt doesn't work well at temperatures below 20F.”

Douglas says travel is going to be especially impacted by the storm.

“I suspect getting around the first few days of next week will be very difficult, no matter how much falls,” Douglas explains. “It's still early to pin down specific snowfall amounts, but most of Minnesota will pick up at least four to five inches, with a band of 8 to 14 inches possible. Where, exactly, the axis of heaviest snow will set up is still up in the air. It could be over the metro, or over central Minnesota - but this promises to be one of the bigger snowfalls of the entire winter season.”

Sunday looks by far to be the warmest day in sight but with some heavy winds that could gust up to 30 mph. And that’s just the pregame for the storm and cold to follow.

“Soak up low 40s Sunday afternoon because next week will look and feel more like early January than early February," Douglas warns.

Highs are expected to be in the low teens starting Wednesday with overnight lows dropping below zero.  For a little perspective, the average high for this time of year is closer to 30 degrees. Above zero.

Paul Douglas' Weather Headlines: Puerto Rico hit with another hurricane, Minnesota about to cool off and still dealing with drought

WCCO Chief Meteorologist Paul Douglas breaks down the latest weather news this week. Minnesota is about to get hit with a ‘cool front’, there’s still significant drought in parts of the state. Meanwhile, another hurricane is devastating Puerto Rico.
MINNESOTA STATE・8 DAYS AGO
WCCO News Talk 830

Residents near Midway and Como Park may have noticed more flashing lights or a drone in the sky as firefighters from St. Paul joined state and federal agents for a simulated hazmat response on Thursday.
SAINT PAUL, MN・5 DAYS AGO

Thousands of motorcycles will once again head along the river on Highway 35 in Wisconsin or Highway 61 in Minnesota for what is one of the oldest and largest motorcycle runs in the country. The State Patrol is urging caution in the area of the ride.
MINNESOTA STATE・11 DAYS AGO
WCCO News Talk 830

St. Paul police search for woman they say may have been shot early Monday morning

Rainbow Fentanyl, a dangerous drug that is targeting children, found in Minnesota

The Minnesota River Valley Drug Task Force recently discovered rainbow fentanyl during a search warrant in Mankato, Minnesota. The Minnesota BCA and U.S. DEA are warning of the dangers of the drug, and the risk to children who mistake it for candy.
MANKATO, MN・4 DAYS AGO

The need for workers in education goes beyond teachers and school staff, as the state currently needs 800 new tutors to work in schools and help students catch up.
MINNESOTA STATE・9 HOURS AGO
WCCO News Talk 830

Authorities say that there have been an increased number of false reports of active shooters at Minnesota schools. They are calling these “swatting” incidents.
MANKATO, MN・6 DAYS AGO
WCCO News Talk 830

According to the Minnesota Secretary of State, there are more than 500,000 Minnesotans who are eligible to register to vote. But for whatever reason, they have not registered. Tuesday is National Voter Registration Day.
MINNESOTA STATE・7 DAYS AGO

Voter registration kicks off before the 2022 midterm election

Minnesota Secretary of State Steve Simon visited a class at the University of St. Thomas on Tuesday to push for college students to register to vote.
MINNESOTA STATE・7 DAYS AGO
WCCO News Talk 830

Students, teachers back in school after more than a dozen false active shooter reports Wednesday

Students and teachers at schools across the state are back in the classroom today after fake reports of active shooters in over a dozen school districts.
MINNESOTA STATE・5 DAYS AGO
WCCO News Talk 830

The Minnesota Supreme Court on Tuesday heard arguments in favor and against expanding camera access inside Minnesota courtrooms. Advocates say it’s time to adopt the technology, similar to how neighboring states have done.
MINNESOTA STATE・7 DAYS AGO
WCCO News Talk 830

When dozens of migrants hopped on a plane for Martha’s Vineyard, they were apparently lured under false pretenses, according to lawyers.
FLORIDA STATE・7 DAYS AGO
WCCO News Talk 830

Fluence Forum: Elections and Voting ahead of the Midterms

WCCO Political Analyst Blois Olson hosts a Fluence Forum sponsored by AARP of Minnesota on Elections and Voting. He speaks to several Election officials from state and local election offices about their processes and safety ahead of the Midterms.
MINNESOTA STATE・9 DAYS AGO
WCCO News Talk 830

Another twist Friday in a massive COVID 19 fraud case involving the organization Feeding Our Future in Minnesota that has now become finger-pointing between different branches of Minnesota’s government.
MINNESOTA STATE・4 DAYS AGO

All the latest local breaking news stories from Minneapolis.