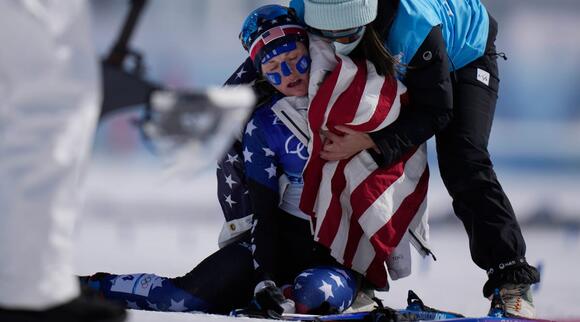 Jessie Diggins made history as the first American woman to win a long-distance cross-country skiing race at the Olympics.

Jessie Diggins made history as the first non-European woman to medal in the women's 30-km mass start cross-country skiing event, and the skier said she did so while battling food poisoning.

On the final day of the Beijing Olympics, a visibly exhausted Diggins needed medical attention after collapsing at the finish line in a dramatic scene.

Later, in her post-race interview, the 30-year-old revealed that she had food poisoning over the weekend and didn't know if she would be able to compete.

“It's really emotional,” Diggins told NBC . “That was one of the hardest things I've ever done in my whole life, especially because I had food poisoning 30 hours ago, which is why I thought I was going to die at the finish line.

”But it was so special to see my family and my fiancé right afterwards on video. My legs were cramping the whole last 17 [kilometers]. I don't know how I made it to the finish but it was amazing. We had so much cheering out there, all of like U.S. Biathlon, all of U.S. Ski. It felt like everyone was out there. When it got really hard, everyone was just breathing with me.”

Diggins won bronze in the women's sprint earlier in the Winter Games, but her silver in the 30-km made history as the first American woman to do so in a long-distance cross-country race at the Olympics. She also won gold in the team sprint at the 2018 PyeongChang Games.

She is a American. She has the fighting spirit that all Americans have and more. Now we can rally behind a real American. Young Americans need to take a lesson from her. She fought back against the odds. I am proud to be American, now. I wonder if Brandon will invite her to the WH. or just the Black American Athletes

I was asked to speak with the Yates investigation into abuse in US soccer after the Guardian published its own report into the University of Toledo that included my reports of being a survivor of sexual assault and abuse. The reality as a survivor is that you struggle to trust others and any sign of doubt about what you share triggers physical and emotional responses that make reliving those experiences yet again difficult.
PUBLIC SAFETY・31 MINUTES AGO
Sports Illustrated

The six teams have punched their playoff tickets, and OL Reign has won the Shield. Now comes the chase for the title.
SOCCER・1 DAY AGO
Sports Illustrated

The Great Muta and Sting Will Reunite One Last Time

More than 30 years after their first match, the two icons will team up for Muta’s retirement match in Japan.
WWE・20 HOURS AGO