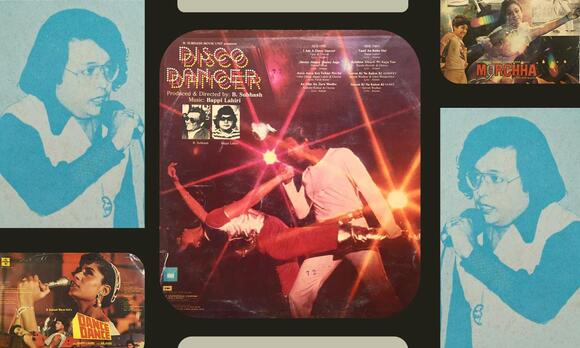 At the height of his fame in the 1980s, “the disco king of Bollywood”, Bappi Lahiri, who died this week, was composing nearly 15 soundtracks a year.

Born in Kolkata in 1952 to a musical family (his parents were classically trained musicians and the playback singer Kishore Kumar was his uncle), Lahiri’s first soundtrack was for a 1973 movie called Nanha Shikari.

But Lahiri, also lovingly called Bappi “Da” (Bengali for brother), is best known for his songwriting on the film Disco Dancer (1982). The movie broke all records and led to an unprecedented boom in disco music in India and disco-themed Bollywood movies. His soundtrack helped the film become a worldwide success and to this day it remains the highest-grossing foreign movie in the Soviet Union.

The score focused heavily on synthesizers, drum machines, string stabs and playful, sexy vocals. The film’s most famous song, Jimmy Jimmy Jimmy Aaja – featuring the little known Indo-Trinidadian singer Parvati Khan – can still be heard on radio and adverts and was sampled by the British-Sri Lankan rapper MIA on her 2007 album, Kala.

Related: ‘The epitome of joy’: 10 of Lata Mangeshkar’s greatest songs

On the Namak Halaal (1982) soundtrack, Lahiri continued his electronic and funk adventures. Its breakout track, the Donna Summer-esque Jawani Jan-E-Man , which featured the actor Parveen Babi dancing and crooning to the voice of Asha Bhosle, became another seminal Bollywood anthem.

That same year, Lahiri also helped Runa Laila, a young Bangladeshi singer who was known mostly as a ghazal and movie playback singer, create a new pop avatar as Superuna . The groundbreaking album fusing disco, reggae, funk and Hindi vocals was a commercial and artistic success.

Lahiri’s output was prolific and in 1986 he entered the Guinness Book of World Records for recording more than 180 songs for 33 films. It’s no surprise that, as the man whose soundtracks gave Indian cinema a youthful injection throughout the 80s and 90s, Lahiri had a sense of style as loud as his music: black shades, gold chains, gold rings, ornate jackets and jumpsuits.

With the rise of hip-hop and break-dance culture in the latter half of the 80s, Lahiri took up the challenge and experimented with electro sounds on I Am a Break Dancer (Pyaar Karke Dekho), Break Dance (Kahan Hai Kanoon) and I Am a Street Dancer (Ilzaam), among others. Mithun Chakraborty and Govinda, two mega-stars in Bollywood known for their dance moves, became synonymous with Bappi’s compositions and vice versa. Govinda wrote on Instagram after Lahiri’s death that he would not have become a star without his music.

A favorite of the cult horror and gore directors the Ramsay brothers , Bappi wrote scores for many of their shoestring budget horror movies including Guest House, Dahshat, Maut Ka Saya, Dak Bangla and Saboot. Meri Jaan and He Met Me in the Guest House are prime examples of him acing the horror aspect with the help of eerie Moog sounds and echo effects.

Although Lahiri is known for his disco stylings, his repertoire and portfolio is not limited to it. He was lauded for his ghazal, classical and folk compositions as well. For 1984’s Kamla, a movie based on the theme of human trafficking and slavery, Bappi delivered delicate ambient compositions based mostly on Indian classical instruments.

Bappi’s career was not restricted to scoring Bollywood soundtracks. He also wrote music for many Telugu, Tamil, Gujarati and Bengali movies. He stayed true to his Bengali roots and would regularly release Bangla albums that would break the barriers of the genre by fusing folk and funk . He launched his very young daughter Rema Lahiri in 1987 with the album Dance Songs For Children, which featured nursery rhymes with a synth-pop flavor. The father-daughter duo launched another album, Dance Party (1990), with a similar theme. In 1988, Lahiri also found time to release an Indian-flavored house track called Habiba .

Related: Bollywood samples – 10 of the best

His work as a mainstream composer fizzled out in the early 2000s but he continued to be relevant in Indian popular culture owing to his appearance as a panelist on TV talent shows, among other guest slots.

His death comes as the Indian film industry faces the passing this month of the legendary singer Lata Mangeshkar , “the nightingale of Bollywood”. Lahiri had been close to Lata since his childhood and they worked on numerous projects together. He described her as “not just an icon, but a pillar of the Bollywood industry”.

One of their collaborations, Thoda Resham Lagta Hai from the Jyoti soundtrack, was illegally sampled by Dr Dre on Addictive by the US R&B singer Truth Hurts. Lahiri was eventually listed on the song’s credits after his record company sued Universal Music Group for more than $500m.

Bappi Da passed away on 15 February 2022 in Mumbai due to a lung infection caused by obstructive sleep apnea and is survived by his wife, two children and grandchildren.

Nishant Mittal is a music collector who can be found @digginginindia , where he celebrates Indian music’s weird and wonderful archives

Has Donald Trump taken up meditation as his new year resolution? Is he mainlining sedatives? Did a demon snatch his soul and replace it with that of a reasonable person? I ask because the unthinkable has happened: Trump has responded to the idea of one of his former acolytes challenging his 2024 ambitions in a calm and measured manner, instead of with his usual insults.
FLORIDA STATE・2 DAYS AGO
The Guardian

The enemy on the other side of the woods can be heard when the wind blows towards the deep Ukrainian trenches. Russian voices carry in the freezing cold air as do the growls of the tanks and the buzz of the kamikaze and reconnaissance drones. But that is not all...
2 DAYS AGO
The Guardian

I think a lot of people think my generation don’t care about politics or aren’t interested. They underestimate how perceptive we are. We’re part of the world too. We sit in classrooms. We know that schools don’t have proper funding and that our teachers aren’t properly paid for the hard work they do.
2 DAYS AGO
The Guardian

A senior Russian lieutenant who fled after serving in Ukraine has described how his country’s troops tortured prisoners of war and threatened some with rape. Konstantin Yefremov left Russia in December after spending three months in the parts of the southern Zaporizhzhia oblast that were occupied in Vladimir Putin’s invasion of Ukraine.
19 HOURS AGO
The Guardian

When I was a child, and friends asked me what I would do if I ever met my dad, I always replied that if I had a gun I would shoot him. I was a young teen in a small east Yorkshire market town with, at best, minor connections to a burgeoning petty criminal underworld. Even if I had been able to get a gun, I would have been more likely to shoot off a finger in error than aim correctly at my absent father. It was an empty threat that clearly revealed a deep, simmering anger.
2 DAYS AGO
The Guardian

An unwelcome and unwanted relationship cannot be imposed, supreme court rules
2 DAYS AGO
The Guardian

Andrea Riseborough’s controversial Oscar nomination will not be taken away after an Academy review. The British actor had been a surprise inclusion in this year’s best actress category for her performance in low-budget drama To Leslie after a last-minute campaign from celebrities including Kate Winslet and Gwyneth Paltrow. Accusations of unfair tactics were raised and the Academy announced an internal review of campaign procedures.
2 DAYS AGO
The Guardian

Do you hate the idea of animal-free meat? Many people do. Unsurprisingly, livestock farmers are often furiously opposed. More surprisingly, so are some vegans: “Why can’t people eat tofu and lentils, like me?” Well, the new products – plant-based, microbial and cell-cultured meat and dairy – are not aimed at vegans, but at the far greater number who like the taste and texture of animals. Many others instinctively recoil from the idea of food that seems familiar, but isn’t.
2 DAYS AGO
The Guardian

‘Don’t take it personally’: three common workplace clashes – and how to deal with them

In our everyday interactions there are people we click with and others with whom we clash. This is a fact of life. So what can you do when a colleague’s way of working affects not just your own productivity but also the broader harmony of the team?. With my...
3 DAYS AGO
The Guardian

Agents however did take away some documents for further review, attorney for the president says
REHOBOTH BEACH, DE・1 DAY AGO
The Guardian

At private school, I saw the arrogance of those ‘born to rule’

Reading the article by Kalwant Bhopal and Martin Myers (Elite universities aren’t hotbeds of ‘wokery’: our research shows they’re rife with racism and classism, 30 January) took me back 77 years to when I was an 11-year-old pupil at Haberdashers’ Aske’s school for girls in Acton, which was then a direct grant school, meaning some places were free and others were paid for. I was one of a handful of girls who were awarded a free place as a result of good performance in the 11-plus examination, courtesy of Middlesex county council.
1 DAY AGO
The Guardian

The rate of executions carried out by Saudi Arabia has almost doubled under the rule of the de facto leader, Mohammed bin Salman, with the past six years being among the bloodiest in the Kingdom’s modern history, a report has found. Rates of capital punishment are at historically high...
1 DAY AGO