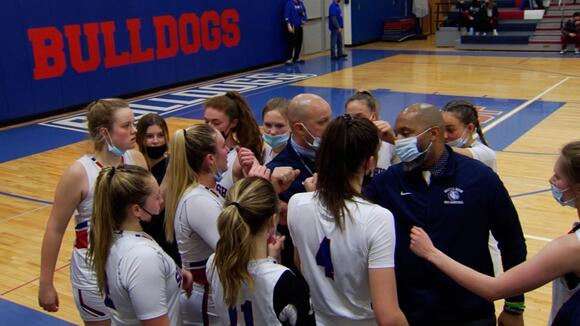 The Bulldogs pulled away in the second half to knock off the Jesters 58-51. Sydney Hart led the way with 33 points for South Glens Falls.

The Bulldogs will now travel to take on Averill Park in the quarterfinals on Thursday at 7:30 PM.

The Cannoneers are now 13-4 on the season and a big reason why is because of Jason Chaplin who made a layup to give Watervliet a 6-4 lead in the early parts of the first quarter.
WATERVLIET, NY・1 DAY AGO
NEWS10 ABC

The top seed in next week's Western Athletic Conference tournament was up for grabs in Schenectady Friday night.
DUANESBURG, NY・1 DAY AGO
NEWS10 ABC

Early on, Shaker had all the momentum letting it rip from three-point range. Andrew Church drained a three that put the Blue Bison up 6-2.
COLONIE, NY・1 DAY AGO
NEWS10 ABC

Colleen Mullen will have to continue pursuing her first head coaching win in Burlington. In five season's at the helm of the University at Albany women's basketball team, Mullen has never won on the road against the University of Vermont. That drought persisted Saturday afternoon as the Catamounts jumped out to an early advantage, and the Great Danes were unable to overcome a first-quarter deficit, dropping their second league tilt of the season by a score of 53-49.
BURLINGTON, VT・16 HOURS AGO
NEWS10 ABC

With 97 seconds remaining in the third period and the score tied at one goal apiece, junior defender Lauri Sertti connected on a game-winning goal to send the Rensselaer Polytechnic Institute (RPI) men's hockey team to a 2-1 victory against the Colgate Raiders Saturday night.
TROY, NY・16 HOURS AGO
NEWS10 ABC

Manhattan sneaks past Saints in overtime

Ant Nelson connected on the game-tying shot with 3.3 seconds left in regulation and Nick Brennen hit the go-ahead three with 42.3 seconds to go in overtime as Manhattan edged Siena Basketball 71-66 at Draddy Gymnasium.
MANHATTAN, NY・1 DAY AGO
NEWS10 ABC

From Warrensburg to West Point; Army’s getting a good one in Tristen Hitchcock

Over the past five years, Section II athletes have looked across the line of scrimmage, or across a mat, seen Tristen Hitchcock, and known they were in for a long day.
WARRENSBURG, NY・2 DAYS AGO
NEWS10 ABC

The slumping University at Albany men's basketball team continued its' downward spiral Saturday afternoon in the 2023 Big Purple Growl game against the University of Vermont. The Catamounts hung 87 points on the Danes - the second-most points UAlbany's allowed in a conference game this season - as Dwayne Killings' bunch suffered a seventh straight loss, falling 87-68.
BURLINGTON, VT・16 HOURS AGO
NEWS10 ABC

The Union men's hockey team had their best performance of the season on the biggest stage this past weekend, rolling RPI in the Mayor's Cup 6-0. Now they look to take that momentum on the road, a place that hasn't been too kind to the Dutchmen.
SCHENECTADY, NY・2 DAYS AGO
NEWS10 ABC

In about two weeks Tommy Kahnle will trade in Albany's frigid weather for some Tampa, Florida sun. The New York Yankees reliever and Shaker High School alum reports for spring training on Feb. 13, but he had some business to attend to in the Capital Region first Friday night.
ALBANY, NY・1 DAY AGO
NEWS10 ABC

American Ninja Warrior (ANW) has chosen three local superstars to compete on the show's upcoming season. Geoff, Jenson and Andre' of the Saratoga Ninja Lab are perfecting their skills as they look to become the next American Ninja Warrior.
SARATOGA SPRINGS, NY・2 DAYS AGO
NEWS10 ABC

According to the Schuylerville Central School District, a new logo has been finalized. Up until this point, the district reports they had many logo variations but no consistent use of one in Kindergarten through 12th grade.
SCHUYLERVILLE, NY・3 DAYS AGO
NEWS10 ABC

This is your weekly roundup of concerts happening around the Capital Region from February 3 to February 9. From tribute bands to regional and local favorites, here are the upcoming concerts for the weekend and following week.
ALBANY, NY・2 DAYS AGO
NEWS10 ABC

Lewis Black's "Off the Rails" tour is still coming to Troy, but event organizers say it will have to wait a few months.
TROY, NY・2 DAYS AGO
NEWS10 ABC

After the brutal cold we had to start off the weekend, its only fitting that we get some above average temperatures to balance it out, right? Temps cruise to right around 40 degrees this afternoon as a warm front lifts past us. Expect some breaks of sun later on as well.
ALBANY, NY・5 HOURS AGO
NEWS10 ABC

This week, the going has gotten cold, and the cold is getting going. The city has announced Crandall Pond open for business - just in time.
GLENS FALLS, NY・2 DAYS AGO
NEWS10 ABC

The Board of Education announced Dr. Gianleo Duca as the next superintendent of schools. This appointment comes after Dr. Duca began as the interim superintendent in September 2022.
BALLSTON SPA, NY・1 DAY AGO
NEWS10 ABC

The cold snap takes it. With single-digit temperatures setting in across Thursday night and into Friday, Moreau Lake State Park has declared open season for ice-based recreation.
GLENS FALLS, NY・2 DAYS AGO