‘Bhaiya’ controversy is like the Black issue in US: Manish Tewari 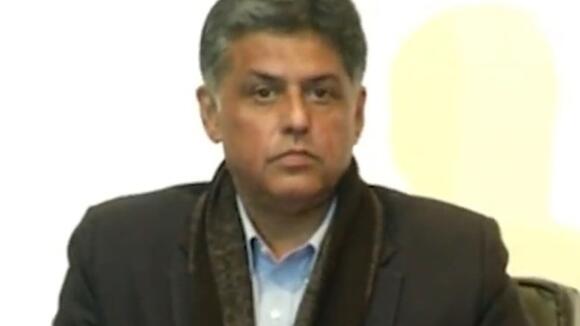 New Delhi, Feb 18 (SocialNews.XYZ) Congress MP from Punjab, Manish Tewari on Friday hit out at his own party leaders on the 'Bhaiya' issue, saying the controversy is like the Black issue in the US.

This comes amid the party's efforts to clear air on the controversy. Congress is trying to damage control with Punjab Chief Minister Charanjit Singh Channi and party General Secretary Priyanka Gandhi Vadra offering clarification along.

Former President Trump responded Wednesday to Russian President Vladimir Putin’s hinting at being willing to use nuclear weapons in Ukraine, saying that the conflict should never have happened and that it could lead to a world war. Trump said on his social media platform Truth Social that the conflict...
POTUS・7 DAYS AGO
CNN

CNN senior international correspondent Ben Wedeman reports from Pisky, a town in Eastern Ukraine that has been partially liberated from Russian forces.
POLITICS・7 HOURS AGO
Newsweek

A Russian soldier has surrendered to Ukrainian forces, just days after being deployed to fight under President Vladimir Putin's nationwide partial mobilization, according to an official. Anton Gerashchenko, adviser to Ukraine's minister of internal affairs, posted a video on his Telegram channel on Tuesday purportedly showing a Russian soldier who...
MILITARY・13 HOURS AGO
Business Insider

A former CIA officer said Vladimir Putin had been backed into a corner over his war in Ukraine. Robert Baer told CNN the Russian leader was unlikely to deescalate, given all his setbacks. Baer also said the chances that Putin might turn to tactical nuclear weapons were increasing. As military...
MILITARY・1 DAY AGO

Belarusian Minister of Foreign Affairs Vladimir Makei disclosed on Monday that he attended a series of confidential meetings with European and American leaders on the sidelines of the United Nations General Assembly last week. “Those were meetings with Europeans and Americans. They asked us to keep our conversations confidential,” Makei...
POLITICS・2 DAYS AGO
abovethelaw.com

Before being known primarily as Donald Trump’s errand boy, Chris Christie was a prosecutor. And he’s using that expertise to issue a warning to Donald Trump: shut your trap. During an appearance on ABC the former New Jersey Governor said the “nonsense arguments” (you know, like that he...
POTUS・2 DAYS AGO
WOWK 13 News

CHARLESTON, WV (WOWK) — Supporters of finishing the Mountain Valley Pipeline will not let a big defeat in the U.S. Senate keep them from fighting onward. By a big margin, the U.S. Senate approved a “Motion to Proceed” vote to fund the federal government by the end of this week, to prevent a shutdown. But […]
CHARLESTON, WV・27 MINUTES AGO