‘The Residue of a Performance You Never Get to See’: Gary Simmons Discusses His First Show at Hauser & Wirth with Thelma Golden 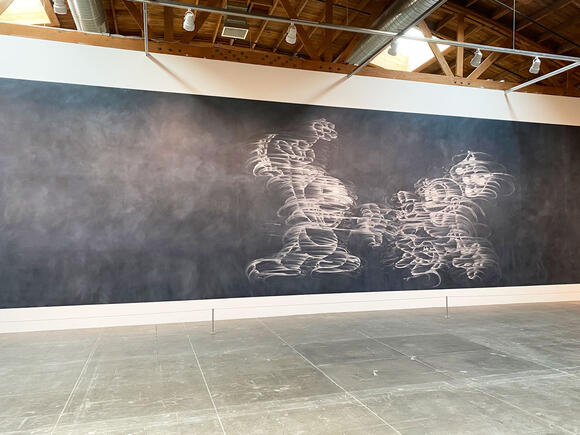 As part of the festivities ahead of the opening of the 2022 edition of Frieze Los Angeles on Thursday, Hauser & Wirth hosted two conversations with the artists who are the subject of just-opened exhibitions at the gallery’s Downtown L.A. space, Phyllida Barlow and Gary Simmons . The latter spoke with one of his longtime collaborators, Thelma Golden, the director and chief curator of the Studio Museum in Harlem. The two first began their conversations 30 years ago, ahead of Simmons’s inclusion in the 1993 Whitney Biennial and Golden’s groundbreaking 1994 exhibition “Black Male: Representations of Masculinity in Contemporary American Art” at the Whitney Museum.

For his first exhibition Hauser & Wirth, “Remembering Tomorrow,” Simmons presents several new bodies of work, including modestly sized drawings, a room of four large-scale wall drawings done in chalk, related works on canvas, and a new installation piece titled You Can Paint Over Me But I’ll Still Be Here (2021), in which graffitied cafeteria tables have been overtaken by sculpted crows.

“The show and most of my work is about recollection and tracing ghosts and things like that, but it’s also forward-thinking,” Simmons said. “There’s a hopefulness in remembering some of the trauma of the past.” Simmons’s works often begin as drawings and derive from “tracing marks left behind,” he continued, adding that the making of the resulting paintings is like “tracing the residue of a performance you never get to see.”

The concept of education and a consideration of schools as sites form the basis for Simmons’s latest works. You Can Paint Over Me But I’ll Still Be Here (2021) comes out of “thinking about the cafeteria as a place of activity, a place of interaction, a place of chaos almost breaking out,” Simmons said. “And then there were the tables where you left messages, and it was a way of creating layers from one year to the next…. A lot of the installation is recalling that in our collective past and opening it up.”

In the paintings and the wall drawings, Simmons depicts two cartoon characters, Honey and Bosko, which were created in the 1920s as stereotypes of Black people. They bear a semblance to Mickey and Minnie Mouse, and have become recurring motifs in Simmons’s work. But rather than showing these characters as they appear in the cartoons from which he appropriated them, Simmons has wiped the works, creating a blur that obscures some of his imagery. He described that process as being “physical and aggressive at times, but also very loving.”

He continued, “I started to think about those cartoons and those images, and how I could attempt to erase those stereotypes. The chalkboard became the material I used, because no matter how hard I tried, I couldn’t erase that image.”

For Simmons, the four wall drawings together form a conversation. Three present seemingly happy images: a character plays the piano in one, two characters dance the Lindy Hop in another, and stars shoot across a third. These are paired with a much more gruesome image, Lynch Frog (2021), which depicts a noosed cartoon dangling mid-air. “What I wanted to do was have you be seduced by all of that, and once you turn to leave the room, you’re looking at the horror of this lynched frog as you leave that is a reminder of where these [images] are coming from,” Simmons said. Cartoons such as the one this work is alluding to were “humorous things for children , which is twisted.”

Simmons is currently set to have a survey in 2023 at the Pérez Art Museum Miami and the Museum of Contemporary Art Chicago, and the artist said he’s been thinking through earlier stages of his practice and what led him to where he is now. “Going through that for any artist can be a very daunting task,” he said. “You start to rediscover this vocabulary that you’ve constructed over the years. That vocabulary is a playground that you become very familiar with. It’s almost the way a rapper has this mastery of spitting rhymes.”

Walter Ulloa, Collector and Media Executive Who Supported Latinx Communities and Artists, Has Died at 74

Walter Ulloa, a collector of Latinx art who had built a major media company focused on reaching Spanish-language countries, died on December 31, 2022, at his home in the L.A. neighborhood of Pacific Palisades. He was 74, and the cause of death was sudden heart failure.   His death was confirmed by his company, Entravision Communications, on January 3, and first reported by NBC News and Billboard. In a statement, Entravision, which Ulloa cofounded in 1996, said, “Since founding Entravision more than 25 years ago, Walter has been an exceptional leader who transformed the company from a traditional multi-linear Spanish-language...
LOS ANGELES, CA・1 DAY AGO