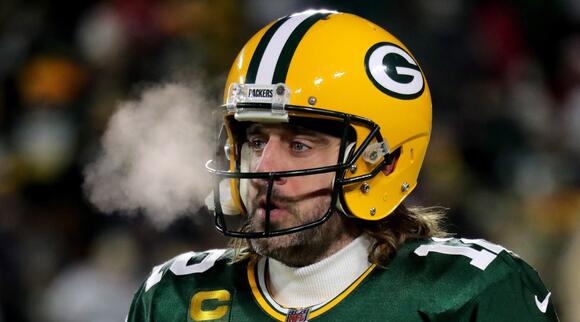 Hub Arkush, the executive editor for Pro Football Weekly and one of 50 Associated Press NFL MVP voters, revealed that he cast his ballot for Cooper Kupp after making clear that he wouldn‘t vote for the eventual winner of the award, Aaron Rodgers.

In an appearance on the “Parkins and Spiegel Show” 670 The Score in Chicago on Tuesday, Arkush shared that he was the lone voter to choose Kupp as the league‘s 2021 MVP. He was one of the 11 AP voters that didn’t vote for Rodgers, with the other 10 casting their ballots for Buccaneers quarterback Tom Brady.

“At the end of the day, the idea that there was ever any personal bias is ridiculous. It‘s subjective,“ Arkush said of his decision to choose Kupp over Rodgers. “There‘s nothing that requires that the MVP be considered for on-the-field [actions] only. It‘s not in the rules, it‘s not in the instructions... I just looked at a long list of worth candidates this year. I would have no argument with Rodgers winning it, Brady winning it, Cooper Kupp winning it, Jonathan Taylor winning it and I could give you a few more...

“I purposefully looked beyond just the on-the-field stuff to see if there were any liabilities. Rodgers brought a ton of liabilities to the Packers this year, that was always my issue. He clearly is the MVP, I don‘t dispute that in any way... It‘s tremendously subjective and, you know, I think I got it right.”

Back in January, with the regular season nearing its end, Arkush revealed that he’d already made up his mind not to vote for Rodgers for MVP. He called the Packers quarterback “the biggest jerk in the league” and a “bad guy”, explaining that his off-the-field antics greatly hurt his ability to be the NFL‘s most impactful player.

“I don‘t think you can be the biggest jerk in the league and punish your team and your organization and your fanbase in the way he did and be the most valuable player,” Arkush said on the Jan. 4 “Parkins and Spiegel Show” on 670 The Score in Chicago. “Has he been the most valuable on the field? Yeah, you could make that argument, but I don’t think he’s been clearly that much more valuable than Jonathan Taylor, or Cooper Kupp, or maybe even Tom Brady.”

Rodgers caught wind of Arkush’s comments and responded, calling the voter “an absolute bum.” Arkush issued a written apology for tipping his hand before votes had been cast, but not for his opinions on nixing Rodgers.

“I’ve apparently unleashed a small army of self-styled social media and talk radio experts who have no clue what they’re talking about to challenge the quality of the voting process and would attempt to invalidate any vote or thought process that doesn’t agree with their own,” Arkush wrote in response to his original comments.

Although Arkush was his only backer, an argument could have been made that Kupp was the league‘s most valuable player in 2021. The Rams wide receiver won the triple-crown, leading the league during the regular season in receptions, receiving yards and receiving touchdowns on his way to being named Offensive Player of the Year. He followed that up with an electric run in the playoffs that culminated in winning Super Bowl MVP, when he caught two touchdowns in LA‘s win over Cincinnati.

Despite Kupp‘s efforts, Rodgers won his fourth MVP award and his second in a row. He led the Packers to a league-best 13–4 regular season record and a No. 1 seed in the NFC, while throwing for 4,115 yards, 37 touchdowns and four interceptions.

Cincinnati sported their white and black striped helmets and uniforms on Thursday night vs. the Dolphins.
CINCINNATI, OH・2 DAYS AGO
Sports Illustrated

The Miami wide receiver did not specify what he heard.
CINCINNATI, OH・1 DAY AGO
Sports Illustrated

The 28-year-old’s first career sack led to unfortunate head and neck injuries for the Dolphins quarterback.
CINCINNATI, OH・1 DAY AGO

The Dolphins quarterback has been dealing with a back injury since last Sunday’s game.
CINCINNATI, OH・2 DAYS AGO
Sports Illustrated

The association is currently investigating the Dolphins’ handling of his concussion check last Sunday.
NFL・2 DAYS AGO
Sports Illustrated

Her decision comes while the former NFL quarterback is at the center of a Mississippi welfare fraud case.
MISSISSIPPI STATE・1 DAY AGO

The retired All-Pro offensive tackle was not happy with how the union addressed the injury on Twitter.
NFL・1 DAY AGO
Sports Illustrated

Buccaneers Announce Chiefs Game Will Not Be Moved

Tampa Bay announced its decision for the site of Sunday’s game against Kansas City.
TAMPA, FL・2 DAYS AGO
Sports Illustrated

The quarterback’s wife was not pleased to see the opinion published by a reader of the Kansas City Star.
KANSAS CITY, MO・12 HOURS AGO
Sports Illustrated

Tua Tagovailoa Asked When He Can Play Again, McDaniel Says

The Dolphins coach says he shut down the discussion and is focused on his quarterback’s recovery.
NFL・1 DAY AGO

Coach Prime has a bone to pick with the disparity in interest in him as a coach and HBCU players as NFL prospects.
JACKSON, MS・2 DAYS AGO
Sports Illustrated

Jones Shoots Down Idea of Rush Starting Over Dak Prescott

After stirring the pot last week, the Cowboys owner made his thoughts clear on the team’s situation at quarterback.
DALLAS, TX・14 HOURS AGO
Sports Illustrated

He appeared to take a shot at the Denver quarterback but he says he wasn’t being critical.
DENVER, CO・2 DAYS AGO
Sports Illustrated

The Dolphins QB was stretchered off the field after a head and neck injury during the Thursday night game vs. the Bengals.
NFL・2 DAYS AGO
Sports Illustrated

Smith: NFLPA to ‘Pursue Every Legal Option’ in Tua Situation

The union’s investigation into the handling of the quarterback’s head and neck injuries this week remains ongoing.
NFL・1 DAY AGO
Sports Illustrated

The Texas commit now holds the records for all-time touchdowns and passing yards  at Isidore Newman High School after his performance on Friday.
HIGH SCHOOL・19 HOURS AGO
Sports Illustrated

The star running back missed practice this week with a thigh injury.
CHARLOTTE, NC・3 HOURS AGO