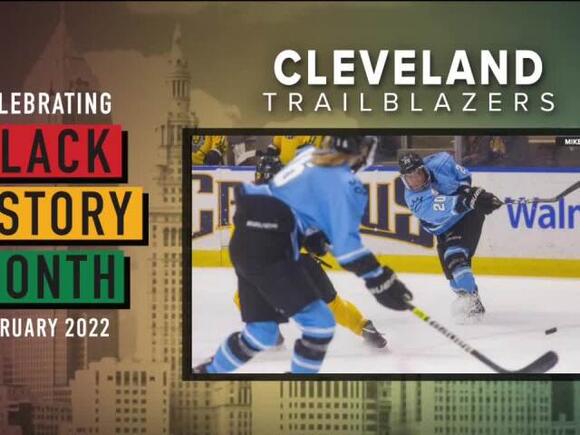 All this month, News 5 is profiling trailblazers in Northeast Ohio Black History, including Blake Bolden, who has broken many barriers and achieved many firsts in the sport of women’s hockey.

A native of Cleveland, she played minor youth hockey for the Cleveland Barons and later went to Northwood School in Lake Placid, New York, where she participated in the first U18 World Championship team for the USA. She won Gold in both 2008 and 2009 tournaments.

After graduating from Boston College, she joined the Boston Blades of the Canadian Women’s Hockey League, winning the Clarkson Cup in 2015.

She’s considered the Jackie Robinson of women’s hockey, becoming the first Black player drafted in the first round of the CWHL and first ever to compete in the NWHL.

In 2020, she joined the NHL's Los Angeles Kings as their Growth and Inclusion Specialist and Pro Scout, becoming the second woman ever to scout in the NHL behind Cami Granato .

Former Cleveland Cavaliers forward Richard Jefferson commented in a series of tweets on the likely suspension of Boston Celtics head coach Ime Udoka for a relationship with a female team staffer. Jefferson’s confusion on the suspension is because the expected length will be a full year when the final decision...
BOSTON, MA・2 DAYS AGO
AllLakers

The Lakers are running out of un-retired numbers!
LOS ANGELES, CA・22 MINUTES AGO
The Associated Press

MIAMI GARDENS, Fla. (AP) — For Middle Tennessee State, big plays brought the biggest win in program history. And for Miami, there are big problems. Chase Cunningham passed for 408 yards and three touchdowns, including a 98-yarder to DJ England-Chisholm, and Middle Tennessee State stunned No. 25 Miami 45-31 for its first win in 21 tries against ranked opponents. “It was a butt-kicking from the very beginning,” MTSU coach Rick Stockstill said.
MURFREESBORO, TN・17 MINUTES AGO
USA TODAY

Middle Tennessee State got $1.5 million to beat No. 25 Miami

Middle Tennessee State received $1.5 million from Miami - plus $40,000 for travel expenses - then beat the Hurricanes 45-31.
MURFREESBORO, TN・29 MINUTES AGO