Dozens of auto workers say they were hurt by UAW, Chrysler corruption scandal 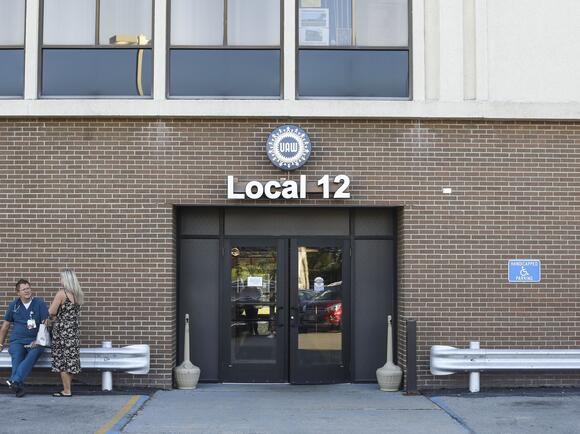 ​Three federal lawsuits reveal how dozens of current and former Fiat Chrysler workers — including a group from Jeep in Toledo — feel the yearslong corruption scandal involving the automaker and the United Auto Workers union negatively impacted their lives.

The cases — two in Michigan and one in Ohio — have been winding their way through the courts for months but have drawn little attention. More than 120 plaintiffs across the three suits, represented by Cleveland attorney Ken Myers, sued the automaker, union, and several former executives individually, alleging the bribery scheme cheated them out of higher wages, benefits, and seniority, and undermined their grievance efforts.

"It’s one thing if you feel you’ve been wronged, cheated out of pay and benefits [but] you trust the process — you trust the grievance process and that your union is going to fight for you," Mr. Myers said. "But when they discovered that for years the company, the union, and higher-up officials had been in bed with each other, giving and taking bribes, that upset their entire confidence in how the collective bargaining system works.”

Federal prosecutors so far have secured 16 indictments and 15 convictions in the sprawling corruption probe that was made public in 2017. The scheme involved millions of dollars worth of bribes that were routed from Chrysler to UAW leadership for various luxuries, in return for favorable treatment on union issues.

In the Toledo lawsuit, 35 workers say they began working at the Jeep plant in 2007 on a temporary part-time basis, though in practice they worked for years full time — in violation of their collective bargaining agreement. Six years later they were finally hired full-time, yet found their pay had been cut by $8 to $12 an hour.

Two grievances were filed over the situation, alleging a violation of the union contract. But several months later a UAW international official withdrew the grievances without telling the workers, the court papers say, something the workers did not realize for months, until it was too late to appeal the withdrawal.

Some of these employees filed a federal lawsuit in 2015 over the situation, but it fizzled out. They pursued other internal remedies that were also snuffed out by UAW international leadership, the lawsuit says.

Then, starting in 2017, they learned that behind the scenes, Chrysler and the UAW had been "engaging in a wide-ranging, long-lasting criminal bribery scheme aimed at saving Chrysler millions of dollars by having the union take company-friendly positions … and derailing the exact type of grievances and lawsuits that plaintiffs were attempting to bring," the lawsuit states.

At one point in 2015, then-UAW Vice President Norwood Jewell met with several of the workers in Toledo under the guise of helping them, the lawsuit says. But behind the scenes he was attending "golf outings in Palm Springs and lavish parties in Detroit, during which time he was bought and paid for by Chrysler."

One of the two Michigan cases involves 42 current and former Chrysler workers across several Detroit-area plants, who say they were similarly cheated out of wages and pension benefits when they were hired full-time in 2010 after years of temporary part-time work.

They claim union officials promised them they would continue making $28 an hour, but found after receiving their first paychecks that they now made $16.

Union officials told them they were just “lucky to have jobs,” the lawsuit says, and that if they did not accept the full-time roles at lower pay, they would be fired. No grievances were filed to help them by local union officials — despite being told they would be — and no changes were made in the 2011 or 2015 collective bargaining agreements with Chrysler to address their issues, despite promises made by UAW officials to address the issue.

The other Michigan lawsuit involves 47 current and former engineers who had been employed by Chrysler at the former Advance Manufacturing Engineering Powertrain division in Auburn Hills. They say they were wrongly forced to start working at a different facility, in Trenton, about a decade ago.

The engineers were unhappy because of the lengthy commute, additional fuel costs, and no relocation allowance, all of which violated the transfer provisions of their bargaining agreement, the lawsuit says. Yet several grievances were mishandled or withdrawn without explanation, the lawsuit claims, and between 2012 and 2015, "union leadership was not responsive to concerns raised by plaintiffs relative to this matter."

All three lawsuits allege violations of the Racketeer Influenced and Corrupt Organizations Act, or RICO, passed in 1970 to prevent organized crime. The plaintiffs are seeking various damages including in the Toledo case to be reinstated in top-paying positions and retroactively compensated for lost wages.

“What separates these cases from ordinary labor cases is that we're alleging that there was this conspiracy between high-level officials at the company and at the UAW to basically steal money from the members," Mr. Myers said.

The UAW and Fiat Chrysler, now known as Stellantis, are pushing for the cases to be dismissed. Both have argued that the plaintiffs waited too long to file, based on a four-year statute of limitations for RICO claims, and that regardless, the allegations do not align with the high standards of such a civil racketeering case. Chrysler attorneys suggest the National Labor Relations Board is the one who should be looking at the plaintiffs' claims.

Spokesmen for both Stellantis and the UAW declined to comment and pointed The Blade to the court record.

The judges in the Michigan cases are considering several motions to dismiss. The Toledo case is on hold until those decisions occur.

The lawsuits come as Chrysler and the UAW try to move past the corruption scandal. In the UAW's case, its membership late last year approved selecting their leaders in direct elections — part of a push to add accountability to the union. A federal judge recently approved the results.

this headline is incorrect, it should say thousands. because thousands of jeep union employees had their spirits crushed and their dignity stripped from them with what happened, and were told to shut up or go work somewhere else.