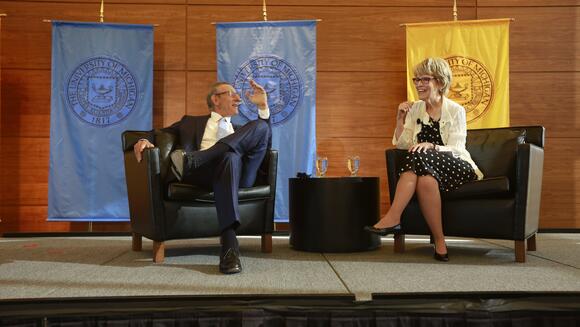 The University of Michigan will pay Mary Sue Coleman the same amount to be the school's interim president as it was paying Mark Schlissel, who was fired from his role as president.

That's $927,000 a year, according to a copy of the contract obtained by the Free Press under an open records request.

Coleman is replacing Schlissel, who was fired on Jan. 15 by the university's Board of Regents for having an inappropriate relationship with a subordinate employee. Schlissel remains a faculty member at the school.

Her new contract calls for her to serve as interim president for six months or until a new full-time president is named, whichever comes first. When a new president is named, Coleman will stick around for two months as a special adviser to the university to help with the transition. She will then revert back to her president emerita status, complete with the office, part-time assistant and on-campus parking she already receives.

Coleman does not have to live in the on-campus president's house. She can stay in her private Ann Arbor house, with the university paying her a $1,000-a-month housing allowance. The contract also calls for the university to send housekeepers to Coleman's private residence to "afford the President the full opportunity to carry out official University duties."

She also gets a car and a driver, who also provides security.

Unlike Schlissel, the contract does not give Coleman a separate appointment as a tenured faculty member.

The reshaping of the University of Michigan's Ann Arbor campus housing — including design plans for a massive new housing and dining complex — will be the focus of the Board of Regents meeting on Feb. 16, the school said Tuesday. Architects will share design plans for a previously approved, 2,300-bed housing and dining complex to be built on the current Elbel Field. The last new residence hall built on campus, North Quad, was built in 2010...
ANN ARBOR, MI・20 HOURS AGO
The Detroit Free Press

He met presidents and the Dalai Lama. What Westland's departing mayor will remember from job

Times and places. These are the moments that stand out for Bill Wild as he reflects on his time as mayor of Westland, a job he has held for 16 years, which makes him the longest-serving mayor in the city’s history.  Wild announced Nov. 22 that he was resigning to accept a job in the private sector as president and CEO of the Midwest Independent Retailers Association, where he’ll be helping retailers and suppliers in the food, beverage...
WESTLAND, MI・1 HOUR AGO