Mason Mount: ‘I look at my second-place medals to think how distraught I was’ 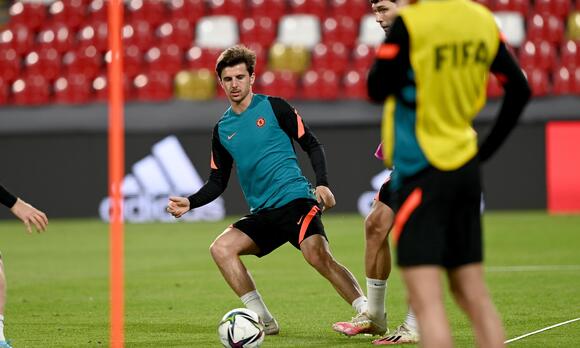 Mason Mount does not like to forget. The midfielder knows how painful it is to lose a final and he will not throw his medal away if Palmeiras stop Chelsea from winning the Club World Cup for the first time on Saturday night. “Obviously the winners’ ones take top place on the mantelpiece,” Mount says after being asked where he keeps his most prized possessions. “You look at the second-place ones for memories. You think how distraught you were. I know a lot of players throw it to the side but I like having them. Then you see the winners’ medals, that feeling of winning, and you remember that. I keep everything.”

The midday sun is beating down in Abu Dhabi and Mount, who is about to play the sixth final of his short career, is in a thoughtful mood. The 23-year-old reached the top when Chelsea beat Manchester City in the Champions League final last season, but he soon came crashing back down to earth when Italy beat England in the Euro 2020 final. “The highs and lows of football,” Mount sighs. “I’ve played quite a few finals and understand what it feels like.”

What would he say to someone playing in their first one? “Enjoy it as much as you can. When you enjoy something you remember a lot about it. I remember quite a lot of the Champions League final. One thing I don’t is when we scored. It happened so quickly.”

Nine months on, Mount struggles to picture what unfolded after his pass sent Kai Havertz through to score Chelsea’s winner against City. “It’s kind of a blur,” he says. “I remember screaming so long I gave myself a headache and I lost my voice.”

It was an emotional occasion for Mount and he struggled in the buildup. “I don’t think I slept well and, for the day of the game, it was the only one I have been very anxious about,” he says. “Butterflies in my belly. I did not eat well but as soon as we got to the stadium I was buzzing.”

Free to express himself, Mount was excellent that night against City. It helped that Thomas Tuchel lightened the mood with a jokey comment over breakfast, and there are plenty of experienced characters in Chelsea’s dressing room. Thiago Silva, the 37-year-old Brazilian centre-back, is influential. “His English is not the best, but he still has that presence to come over and say: ‘Just do your stuff,’” Mount says. “He’s one of the best in training every day.

“He’s starting to learn a bit more English. When we eat he sits next to me. Jorgi’s [Jorginho’s] across from him, then we’ve got me, Marcus Bettinelli and a few of the English boys. He’s down the English end, so maybe he’s done that to learn more of the slang.”

Mount is relaxed as he holds court at Chelsea’s hotel, smiling when he spots a Palmeiras fan sitting by the pool. The significance of the Club World Cup is not lost on him. Chelsea have never been world champions and they know that the Copa Libertadores champions will be up for it. “It’s a massive game,” Mount says. “We all know how big the competition is in Brazil. We saw when they were on the coach to the airport, the amount of fans that turned up to send them off.”

Chelsea did not convince against Al-Hilal on Wednesday and Mount, who was fit enough only to come off the bench, accepts that he has not had an easy campaign. Minor injuries have stalled his momentum and he was out for a few weeks after having all of his wisdom teeth out in November.

“You don’t think your teeth are going to stop you from playing football,” Mount says. “It did actually really mess me up. It was Newcastle away and I woke up on the day in agony. I was in the car back to London and it was the worst journey I’ve ever been on. I wanted to just rip them out myself but it wouldn’t have been the best idea.”

It was not easy for Mount to be on the sidelines. He made 69 appearances for club and country last season, although he accepts there are benefits to having a short break. “Sometimes you have to admit to yourself and go to the manager and say: ‘Look, I am feeling it a bit’ – through gritted teeth.” But would he ever actually do that? “No! I just leave it to the physios.”

It is not a surprise. Frank Lampard said that Mount’s eyes would burn whenever he left him out and Tuchel experienced something similar when he dropped the England midfielder against City last month.

“Missing out on a big game hurts,” he says. “But I’m not someone to go straight away to a manager and say: ‘Why are you not starting me?’ I’m someone who likes to show in training that I’m ready.”

There is a relentlessness to Mount. He is quick to jump in with a correction when he is asked about his childhood friend Declan Rice becoming a goalscoring midfielder for West Ham this season. “Is he?” he says. “How many has he got?”

Mount is happier once the question is about Rice trying to become a goalscoring midfielder. His competitiveness has kicked in. Is he in a race with Rice? “If I finish up under him this season I’ll be very disappointed,” Mount says. “It will be back to the drawing board. He’s on two goals. I’m on seven.

“But obviously he’s been brilliant. I don’t want to say too much about him. I don’t want to gas him up too much but he’s done very well this season. You see how dominant he is for West Ham. Hopefully that continues.”

Mount does not remember Rice surging forward quite so much before the West Ham midfielder was released by Chelsea at the age of 14. “He was a centre-back then so if he ever came close to me I’d say: ‘Get yourself back there, mate! You’re not coming past me!’ But you can see how he’s progressed over the last couple of years. The way he strikes the ball, the way he finishes, I’ve always said to him he can score way more goals.”

Mount and Rice could be teammates again if Chelsea have their way this summer. For now, though, the focus is on beating Palmeiras. History is there to be made and Mount wants a Club World Cup medal on his mantelpiece. “The Champions League is definitely number one,” he says. “Hopefully on Saturday this one will be up there.”

Why has the FA not spoken up over Uefa failings after Liverpool fans’ Paris ordeal?

The profoundly shocking way Uefa mishandled its Champions League final on 28 May has prompted alarming questions about the organisation and its president Aleksander Ceferin and, by natural extension, the whole edifice governing modern football. Uefa may still be that great institution, formed in 1954 to organise the European Cup...
UEFA・12 HOURS AGO
The Guardian

Against all odds, Lionel Messi has one last shot at World Cup glory with Argentina | Jonathan Wilson

The biggest compliment that can be paid to Scotland is that they did not panic when the Republic of Ireland threatened to rip up their script. Only a draw was required from this clash for the same outcome from Tuesday’s meeting with Ukraine to see Steve Clarke’s men seal top spot in Group B1 of the Nations League. It is lost on nobody in these parts that the Scots would pass relegated England while en route to Group A.
SPORTS・8 HOURS AGO
The Guardian

Don’t leave your job because of this man who will only give you bits of himself. Instead, consider leaving him
RELATIONSHIP ADVICE・1 DAY AGO
The Guardian

Murder of Tennessee teacher could have been avoided had police properly investigated rape accusation, lawsuit says
MEMPHIS, TN・2 DAYS AGO
The Guardian

#The Champions League#City
The Guardian

At least 77 people have drowned after the migrant boat they boarded in Lebanon sank off Syria’s coast, the deadliest such shipwreck from Lebanon in recent years, amid fears the death toll could be far higher. The country, which has been mired since 2019 in a financial crisis the...
ACCIDENTS・1 DAY AGO
The Guardian

Dame Hilary Mantel, who has died aged 70 after suffering a stroke, was the first female author to win the Booker prize twice, which she did for the first two volumes in her epic trilogy of the life of Thomas Cromwell, Wolf Hall (2010) and Bring Up the Bodies (2012). The novels, which collectively weigh in at about 2,000 pages, have sold 5m copies worldwide, were made into an acclaimed BBC series (2015) staring Mark Rylance, and adapted by Mantel herself for the RSC stage version (2014), a process that she loved. The trilogy culminated with The Mirror and the Light (2020) and the death of Cromwell; it turned out to be her final novel. All told in the present tense, the novels constitute a feat of immersive storytelling and a monumental landmark in contemporary fiction.
BOOKS & LITERATURE・1 DAY AGO
The Guardian

Rolling report: Roger Federer has played the final match of his storied career alongside Rafael Nadal in London. Bryan Graham was watching
TENNIS・1 DAY AGO
The Guardian

The main perpetrator of an assault against a group of women at a barbecue restaurant in China has been sentenced to 24 years in prison, after the case sparked a national debate over gender-based violence. Chen Jizhi started hitting the women after they rejected his “harassment” in the early hours...
PUBLIC SAFETY・1 DAY AGO
The Guardian

Are we confident that this Russell Wilson-Nathaniel Hackett marriage isn’t some kind of Nathan Fielder bit?. The plan: to hire a coach who cannot count; to trade a boatload of draft picks and players for an aging, “mobile” quarterback who looks increasingly immobile; to hand that quarterback a five-year, $245m contract with $165m guaranteed at signing; to hire a series of coordinators who’ve never coordinated units or called plays before; to sell one of the league’s most prestigious franchises to an owner who doesn’t know the name of the commissioner.
DENVER, CO・2 DAYS AGO
The Guardian

Russia-Ukraine war latest: what we know on day 212 of the invasion

The Ukrainian counteroffensive is yet another major development in the Russia–Ukraine war that took Russia entirely by surprise. Images of fleeing Russian soldiers, leaving behind equipment as well as evidence of war crimes, have once again filled the media. Wiping out months of Russia’s territorial gains, quick Ukrainian advances caused a domino effect; massive and chaotic Russian retreat left a huge hole in their defences.
POLITICS・1 DAY AGO
The Guardian

‘This should not be normalised’: Why musicians are cancelling tours to protect their mental health

In early August, Yard Act were at Stansted airport, waiting for a flight to Sicily, when singer James Smith hit a wall. “It felt as if I was in a cattle shed,” he says. “I was banging my head against the table saying: ‘I can’t do this any more.’”
MENTAL HEALTH・2 DAYS AGO
The Guardian

Do the latest legal woes spell the end for Donald Trump? | First Thing