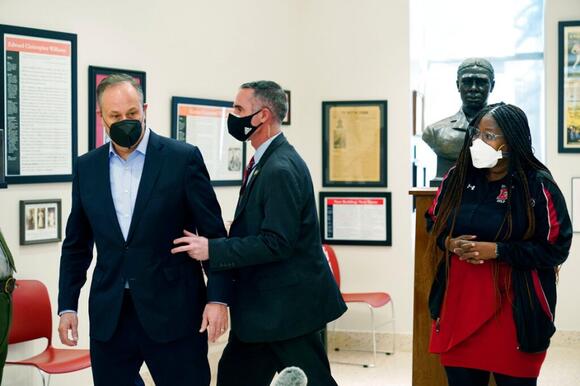 ( The Hill ) – Second gentleman Doug Emhoff was escorted out of a Black History Month event at a Washington, D.C., high school on Tuesday after the school reported a security threat.

Emhoff visited Dunbar High School in Northwest Washington, where he heard from school leaders about its Black history program that partners with the National Park Service.

About five minutes after Emhoff arrived at the school’s history wing, a Secret Service agent ushered him out. Emhoff’s staff relayed to reporters attending the event that there was a security threat reported by the school to Secret Service.

“U.S. Secret Service was made aware of a security threat at a school where the @SecondGentleman was meeting with students and faculty,” Emhoff’s communications director, Katie Peters, tweeted Tuesday afternoon . “Mr. Emhoff is safe and the school has been evacuated. We are grateful to Secret Service and D.C. Police for their work.”

A spokesperson for D.C. Public Schools told a reporter at the scene there was a bomb threat reported at the school. Teachers and students in the building were also evacuated.

“We had a threat today to the facility so … basically we took the precaution of evacuating everybody, as you saw. I think everyone is safe. The building is clear. But I don’t have any specific details at this moment,” press secretary Enrique Gutierrez said.

Dunbar principal Nadine Smith told reporters students were sent home for the day while preparations to clear the building are made.

Emhoff’s event was one of the ways the White House is seeking to highlight Black History Month. Dunbar was the first high school in the United States to serve African Americans, according to its website, and its alumni include Washington, D.C., Del. Eleanor Holmes Norton (D), and Lawrence Chambers, who was the first African American graduate of the U.S. Naval Academy to reach the rank of admiral.

Multiple cabins burned overnight in the Upper Middle Creek area of Sevier County and investigators are working to determine the cause of the "intense fire."
SEVIER COUNTY, TN・2 DAYS AGO
WATE

Following a tip by an animal welfare group, the Union County Sheriff's Office raided a cockfighting derby over the weekend and cited nearly 100 people.
MAYNARDVILLE, TN・1 DAY AGO
WATE

A father of a daughter who lost her family in a house fire over the weekend in Luttrell traveled to Tennessee trying to get some answers.
LUTTRELL, TN・2 DAYS AGO
Eden Reports

On Sunday, Maria Bartiromo reported during a Fox News Sunday Morning Futures segment that there are 1,850 boxes filled with classified documents that President Joe Biden donated to his home state's university.
NEWARK, DE・3 DAYS AGO
WATE

Over $250,000 of counterfeit clothing seized from Knoxville store

A Knoxville man is facing charges including money laundering after officers conducted a search of the story he was operating, according to the Knox County Sheriff's Office.
KNOXVILLE, TN・18 HOURS AGO
WATE

KNOXVILLE, Tenn. (WATE) — A Detroit, Michigan woman is facing drug charges after a DEA Officer said she allegedly brought methamphetamine and fentanyl to Knoxville using a Greyhound bus. The DEA officer, who is also employed by the Knox County Sheriff’s Office, said in a criminal complaint that he...
KNOXVILLE, TN・20 HOURS AGO
WATE

PIGEON FORGE, Tenn. (WATE) — What used to be three rental cabins side by side is now completely gone and turned into rubble after an overnight fire in Pigeon Forge. An investigation is continuing into what caused the flames. Around 1 a.m. Tuesday, Sevier County Central Dispatch received a call reporting a structure fire in the […]
PIGEON FORGE, TN・1 DAY AGO
WATE

All other animals appear to have been undisturbed, zoo officials said Monday.
BROUSSARD, LA・2 DAYS AGO
WATE

A man is dead after a car crashed on I-40 East in Knoxville, according to Knoxville Police Department Spokesperson Scott Erland.
KNOXVILLE, TN・1 DAY AGO
WATE

Hearse carrying body for donation slides off I-70 in Colorado

As Summit Fire and EMS said, "OK, file this one under: 'You'll never believe it.'"
SILVERTHORNE, CO・2 DAYS AGO
WATE

KNOXVILLE, Tenn. (WATE) — One man was injured after a shooting at a West Knoxville apartment complex Monday night, according to Knoxville Police Department Spokesperson Scott Erland. Erland said officers responded to Parkwest Medical Center around 9 p.m. after a man drove himself to get treatment for his injuries.
KNOXVILLE, TN・1 DAY AGO
WATE

MEMPHIS, Tenn. — Two EMTs and a lieutenant with the Memphis Fire Department have been terminated for violating policy and protocol in their response to Tyre Nichols on Jan. 7. EMT-Basic Robert Long, EMT-Advanced JaMichael Sandridge and Lt. Michelle Whitaker failed to make an adequate assessment of the patient when they arrived on the scene, […]
MEMPHIS, TN・2 DAYS AGO
WATE

A former Knox County business owner was arrested on charges including 29 counts of tax evasion according to the Tennessee Department of Revenue.
KNOX COUNTY, TN・1 DAY AGO
WATE

SEVIERVILLE, Tenn. (WATE) — The Sevierville Police Department is asking for the public’s help to identify a suspect in an overnight theft at the Great Smokies Flea Market in Kodak. During the overnight hours of Jan. 17, a suspect stole about $2,000 worth of merchandise from various vendors...
SEVIERVILLE, TN・1 DAY AGO
WATE

One killed in Cocke County crash

MEMPHIS, Tenn. (WREG) — Memphis Police say a seventh officer was relieved of duty for his involvement in the confrontation with Tyre Nichols but did not name the officer. MPD released a statement Monday with additional information about their findings in the investigation. The seventh officer has not been identified and their role in the incident […]
MEMPHIS, TN・2 DAYS AGO
WATE

Passenger ejected from car after crash in Cocke County

A passenger died in a car crash on a highway in Cocke County Monday afternoon, according to the Tennessee Highway Patrol.
COCKE COUNTY, TN・2 DAYS AGO
WATE

Authorities are investigating an officer-involved shooting near Sweetwater, according to the U.S. Marshals Service. A person has been taken to the hospital with gunshot wounds.
MONROE COUNTY, TN・23 HOURS AGO