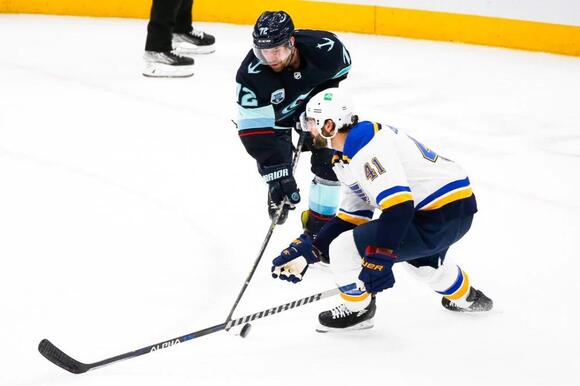 Bortuzzo, 32, was in line to become an unrestricted free agent after this season. He had been playing out the final campaign of a three-year, $4.25 million deal.

A Stanley Cup winner with the Blues in 2019, Bortuzzo has recorded three points (one goal, two assists) in 37 games this season.

He has 66 points (18 goals, 48 assists) in 454 career games with the Pittsburgh Penguins and Blues. He was selected by the Penguins in the third round of the 2007 NHL Draft.

Brown, 23, has collected six points (three goals, three assists) in 17 games this season. He could have become a restricted free agent after this season.

A St. Louis native, Brown has 15 points (four goals, 11 assists) in 47 NHL games with the Ottawa Senators and Blues. He was selected by the Senators the 11th overall pick of the 2016 NHL Draft.

Blue Jays finish with twin bill vs. Orioles before playoffs

The Toronto Blue Jays had a little more time to relish their status as the American League’s top wild-card team.
BALTIMORE, MD・9 HOURS AGO
Sportsnaut

Cardinals look for win over Pirates ahead of playoffs

The visiting St. Louis Cardinals are making no secret of the fact that playoff preparation is their top priority in
SAINT LOUIS, MO・7 HOURS AGO
Sportsnaut

Cards pull out 10-inning win as Pirates take loss No. 100

The Atlanta Braves, who clinched their fifth straight National League East title by winning the penultimate game of the season,
MLB・9 HOURS AGO

It was an unsurprising Sam Haggerty move. Trailing the Detroit Tigers by a run with two outs in the bottom
SEATTLE, WA・1 DAY AGO
Sportsnaut

Tuesday’s game between the Baltimore Orioles and the visiting Toronto Blue Jays was postponed due to inclement weather, setting up
BALTIMORE, MD・17 HOURS AGO
Sportsnaut

After a disappointing end to their faint wild-card hopes, the Milwaukee Brewers will have to regroup against Arizona ace right-hander
MILWAUKEE, WI・1 DAY AGO
Sportsnaut

Toronto Raptors guard Malachi Flynn is recovering from a broken left cheekbone. He sustained the injury during the third quarter
NBA・37 MINUTES AGO

The 2022 Major League Baseball season is drawing to a close and that means it’s time for the MLB playoffs.
MLB・4 HOURS AGO
Sportsnaut

The Seattle Mariners have one last game to get through before making their first playoff appearance since 2001, hosting the
SEATTLE, WA・3 HOURS AGO

Houston Astros ace right-hander Justin Verlander just put the finishing touches on what might be regarded as one of the
HOUSTON, TX・1 HOUR AGO
Sportsnaut

Ahead of making their fourth consecutive MLB postseason appearance, the Tampa Bay Rays will conclude the regular season – if
SAINT PETERSBURG, FL・3 HOURS AGO
Sportsnaut

Washington Commander rookie running back Brian Robinson has been cleared to finally return to practice. A little over a month
PULLMAN, WA・55 MINUTES AGO
Sportsnaut

Dodgers look to regain footing in finale vs. Rockies

The Los Angeles Dodgers have one more regular-season game remaining before they finish the hefty appetizer that is the 162-game
LOS ANGELES, CA・4 HOURS AGO
Sportsnaut