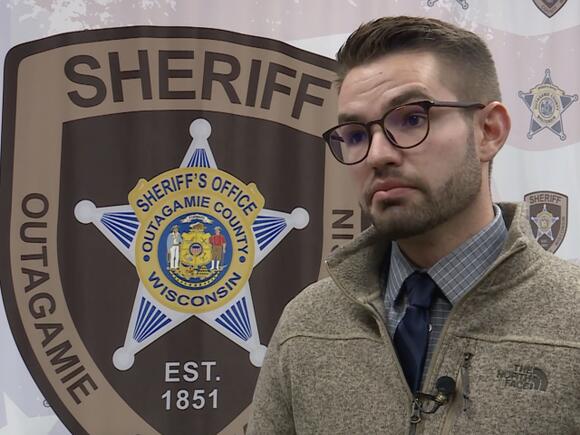 Josh Hopkins doesn't look like your typical police officer, and that's because he isn't. He doesn't drive a squad car and he doesn't wear a uniform, but his role is just as important.

Josh is part of the Outagamie County's Sheriff's Office and works as it's first Behavioral Health Officer. He responds to calls and investigates whether mental health issues may have played a bigger part in police incidents. Subsequently, he works with the District Attorney's Office to figure out how to best handle someone with a mental illness who committed a crime.

"It kind of keeps them out of the criminal justice system and ensures that they have the long term mental health resources that they need," said Josh.

On top of that, he trains deputies so they can be aware of the red flags and recognize that there may be more going on behind the scenes. Josh is already seeing that officers are asking the additional questions related to mental health, and thus, responding differently.

The community also understands the importance of having someone in the force like Josh. What makes this Outagamie County position unique is the money raised to support it was through private funding for the next three years.

"The community is super engaged and has really put their money where their mouth is," said Beth Clay, the Executive Director of the N.E.W. Mental Health Connection.

Beth was part of the team that pushed for Josh's position.

"We wondered what would happen if, if they came to the scene with more information and with the goal of connection to treatment and support, and not a goal related to safety or crime," said Beth.

She argued Josh's position offers not only humanitarian benefits, but also financial benefits; breaking the stigma of mental health, but also saving money.

"Once somebody has escalated up to charges, the cost of just processing that person, when everybody realizes this happened because of their mental illness, it was not criminal intent," said Beth.

Josh and Beth both believe this is a position that more departments should adopt, but it's the funding that makes it difficult. They're hoping to show other counties that it's possible to raise the money. But for now, Josh hopes to be just the first piece in the puzzle that is mental health crisis and overall police reform.

"The things that I've been involved with, and the differences that we've been able to make, and community members lives, it is something that I see more and more departments transitioning to in the future," said Josh.

Appleton Police are seeking to locate a person of interest in the homicide of a 56-year-old Appleton man, during the evening of January 22, 2023, in the 1200 Block of North Briarcliff Drive.
APPLETON, WI・21 HOURS AGO
NBC 26 WGBA Green Bay

Attorney for Taylor Schabusiness asks for trial to be pushed back

The attorney for a woman accused of killing and dismembering a Green Bay man is asking for her trial date to be pushed back.
GREEN BAY, WI・4 DAYS AGO
NBC 26 WGBA Green Bay

Less than 24 hours after a large fire ignited at a scrap yard in the town of Meeme, officials say the blaze has been put out thanks to a massive effort from local first responders.
MANITOWOC COUNTY, WI・1 DAY AGO
NBC 26 WGBA Green Bay

The victims have been identified as Rhonda Cegelski, 58, of Green Bay, and Paula O'Connor, 53, of Bellevue.
GREEN BAY, WI・4 DAYS AGO
NBC 26 WGBA Green Bay

Schools on the hunt for more special education teachers

Sturgeon Bay Police found a deceased man Tuesday morning on the side of the road in the 100 block of South Lansing Avenue.
STURGEON BAY, WI・7 DAYS AGO
NBC 26 WGBA Green Bay

This year, four candidates are in the running for Green Bay mayor. One of those people on the ballot is Incumbent Eric Genrich, who is seeking a second term.
GREEN BAY, WI・5 DAYS AGO
NBC 26 WGBA Green Bay

Amtrak Train Service to Green Bay: A 360-degree look at the proposal