Former Dolphins running back Matt Breida is a pending free agent, and he'd love to return to South Florida.

Especially if it's to play for Mike McDaniel .

"It was awesome to play for him," Breida said of 2017-2019, when McDaniel was run game coordinator in San Francisco.

Brieda began his career with the 49ers as an undrafted free agent.

McDaniel was scheduled for his second interview with the Dolphins on Friday. Now offensive coordinator for the 49ers, McDaniel and Kellen Moore of the Cowboys are known finalists.

It's quite possible the Dolphins' next head coach will be revealed this weekend.

"He understands formations and motions," Breida said. "We had a lot of formations but ran the same runs out of them. He just looks at things differently." 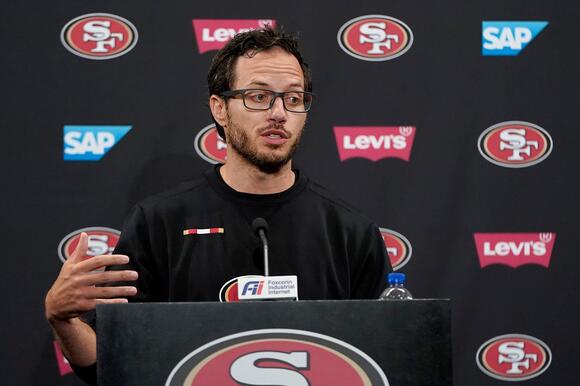 "They're aligned," Breida said. "They think alike. He's one of the best I've ever been around."

It was not lost on Breida how creative and flexible the 49ers' offense appeared in a playoff run to the NFC championship game.

"It's not always so complicated," Breida said. "It's the players and how they use them. Look at Deebo Samuel. He had been there for two years but they found a way to get him involved in the run game. It's how you use your players. They know the players' strengths. Get them in space. Go with power. Being able to motion or move guys around. How many times you seen an offensive tackle like Trent Williams go in motion? How many times? That causes a lot of problems for a defense."

Every coach has their own way to motivate but Breida says McDaniel uses mutual respect to foster accountability.

"He is able to connect and talk with guys," Breida said. "He's not yelling in your face. He talks to you like a grown man or your son. He's got a lot of guys out there who want to do well and do well for him." 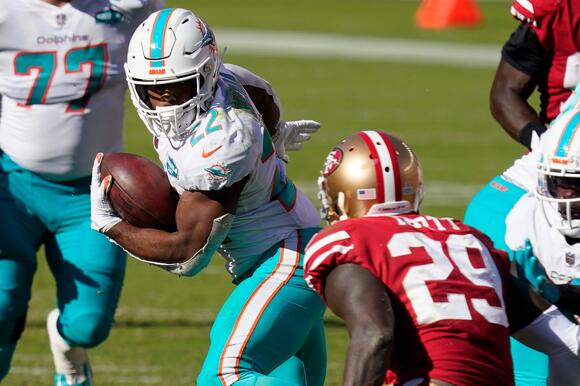 If the Dolphins hire McDaniel. it would be because they perceive him as an up-and-coming, young (38 years old) offensive mind. They would be hoping he could make Miami's offense more dynamic, exciting and productive.

But they would also be looking to change the tone in the building. Under Brian Flores, there was an extremely serious and sometimes abrasive Patriots Way-type approach.

McDaniel seems like a guy who likes to have some fun.

"He can be very funny," Breida said. "You may not always get his sense of humor. But a lot of hidden jokes. Good guy. Good coach."

A former NFL wide receiver who was coached by McDaniel in Cleveland in 2014 expressed his admiration for McDaniel on Friday, too.

"He's truly a football savant," said Andrew Hawkins. "And I know there are a lot of brilliant minds in football. His approach is very, very unique and it's why he's able to exploit the norms. A lot of players swear by him. He has a very unique ability of identifying talent. And also knowing exactly how to get the most of out of a certain skill set. Players swear by him because players have had career years with him."

Hawkins explained that he's been around too many coaches who are using the same coaching points and talking points used since the 1960's. He says McDaniel is very detailed and precise but also unique in how he processes ideas and teaches them.

"When I got with Mike, his whole philosophy turned everything I thought I knew upside down," Hawkins said. "How you get off the line of scrimmage and here are the options. Here are the two techniques every DB uses. And if you do this he takes all the thinking out of it. How you approach catching the football. How to approach running after the catch. I was very very skeptical. But we did it his way and it worked. The way be broke down and explained strategies, it felt very Mr. Miyagi-like. You're doing this and that and this and that and then one day it all ties together."

Hawkins believes McDaniel will be an successful head coach.

"If you're honest with players, that's all they want," Hawkins said. "To be honest and to put you in a position to be better. He's put those guys in a position to be their best. He'll get everyone pushing in one direction. Make the game easier for you. That's what guys gravitate to. Kyle Shanahan, that's his philosophy, too. I'm excited about Mike. When it comes to football minds, he may be the best of the bunch."

Concern in the San Francisco 49ers world had been palpable for Christian McCaffrey after he suffered a calf contusion in the divisional round.  Both Kyle Shanahan and McCaffrey indicated this week that he'd be able to play against the Philadelphia Eagles, but the team just made the news ...
SAN FRANCISCO, CA・34 MINUTES AGO
Miami Herald

Dolphins set to hire Vic Fangio as next defensive coordinator

D.J. Williams could have followed his father's footsteps in the NFL, but evolving into a NFL coordinator of head coach may be his calling.
GRAMBLING, LA・29 MINUTES AGO
KZHT 97.1 ZHT

Packers Prefer 'To Move On From' Aaron Rodgers: Report

(WHTM) — Nick Sirianni has led the Philadelphia Eagles to new heights. The head coach set a franchise record for most wins in a regular season (14) and has his Eagles one game away from the Super Bowl. Sirianni and the Eagles will now face the San Francisco 49ers in the NFC Championship Game. But […]
PHILADELPHIA, PA・33 MINUTES AGO
Palm Beach Daily News

Dolphins quarterback Tua Tagovailoa is in line for the Pro Bowl but remains in protocol and will not participate in those activities, a league source confirmed Friday. Dolphins defensive coordinator search: 5 things to know about Anthony Campanile ...
HAWAII STATE・1 DAY AGO
Palm Beach Daily News

Five years ago, former Dolphins coach Adam Gase fired defensive backs coach Lou Anarumo. Let Anarumo's firing be a life lesson: his setback set the stage for a comeback. Anarumo is now defensive coordinator of the Bengals, hoping to make a second straight trip to the Super Bowl. It will happen if Cincinnati can win at Kansas City (6:30 p.m. Sunday on CBS).
CINCINNATI, OH・2 DAYS AGO