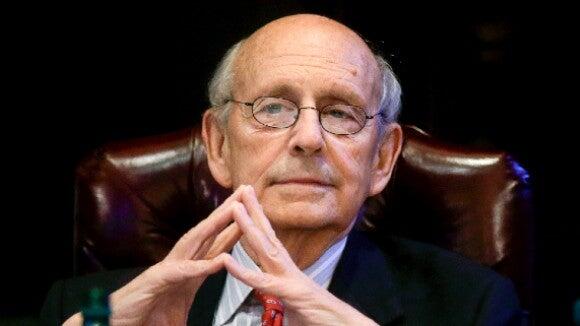 Justice Stephen Breyer —a longtime defender of the Supreme Court’s ability to rise above party politics—announced his retirement from the Supreme Court. Breyer, who was nominated to the Court by President Clinton in 1994, will leave his seat to President Biden , thus continuing the apparent cycle of strategic, political departures from the bench.

Breyer’s choice to step down—following a lobbying campaign from Democratic party activists—emphasizes the reality that the Supreme Court and its members have strayed far from the political isolation coveted by our constitutional Framers.

Leaving one’s seat to a like-minded president seems obvious and commonplace to our political system now, but at the turn of the last century in 1900, a staggering two-thirds of Supreme Court justices up to that point had died while on the bench. Since the Kennedy administration, however, we’ve seen only three such deaths—Chief Justice William Rehnquist in 2005, Justice Antonin Scalia in 2016, and Justice Ruth Bader Ginsburg in 2020.

The reason for this marked change in judicial behavior stems from a retirement plan that became available to federal judges and justices through an act of Congress. The plan, still in effect today, allows federal jurists to retire with full pay for their remaining years of life if a particular formula is satisfied. The formula is straightforward: to take advantage of the plan a judge or justice’s age and their years of service on the federal bench must add to at least 80, and they must be at least 65 years old. The financial security afforded by this plan transformed the incentive that underlies decisions to leave the bench, and since then we’ve seen a conspicuous rise in political departures from the Supreme Court.

Of course, not every retirement from the Court is political, as we’ve seen when health concerns force a justice’s departure. Some justices have acknowledged the dynamic but downplayed the role politics plays in these retirement decisions. Chief Justice Rehnquist, for example, said that there’s only a “slight preference” to step down when a president of the same party is in office. Other justices haven’t shied away from voicing their true feelings. Justice James Clark McReynolds famously proclaimed he would stay on the bench so long as “that crippled son-of-a-bitch [FDR] is in the White House.” And Justice William O. Douglas reportedly confessed that he intended to stay on the Court “while there’s a breath in [his] body, until [there is] a Democratic president.”

These striking examples underscore one of the many drivers behind calls for judicial reform. Whether that reform comes by way of term limits, an elevated term of years, or through abandoning a defined Court size altogether, all of these mechanisms seek to make appointments to the Court regular, foreseeable events.

Justice Breyer, for his part, doesn’t see the decision to step down as a judicial act. And while that may be true, there’s no denying the fact that strategically timing one’s departure from the bench with an eye toward the White House is done, at least partially, with a desire to continue the jurisprudential legacy of that seat on the bench.

As recently as late August of last year, Justice Breyer was noncommittal about his departure. But the last five months—amid ever-growing uncertainty about the Democrats’ majority in the Senate—have changed his tune. Indeed, the news of Breyer’s retirement is hardly surprising given the drumming of calls for him to step down before the upcoming midterm elections. For an institutionalist such as Breyer, this decision makes sense. Indeed, if he were not to step down before the midterms, he would surely tee up the Court for more political jostling by the Senate—something the Court can ill afford.

By all accounts, Breyer has been a vocal defender of the Court’s independence, seeking to increase education about the Court’s business in hopes that those politicizing the institution would find their efforts fruitless. He has long championed the Court’s neutrality, insisting justices try to avoid political considerations while fulfilling their constitutional duties and cautioning against “the peril of politics.”

Breyer’s retirement announcement, then, highlights a stark irony: Despite trying to protect the Court from continued politicization, Breyer’s last official act is a plainly political one, and his decision to cede to the political activists lobbying for his retirement—despite a staid judicial philosophy that has shown no sign of atrophy—further emphasizes the need for the type of court reform he advocated against.

Scott Boddery is an assistant professor of political science at Gettysburg College and the director of the Eisenhower Institute’s Fielding Center.

No judeges, especially SCOTUS, should be affiliated with either political party. ALL judges should be Unaffiliated! #WakeUpAmerica

to all the people who have no clue OPEC sit the price for oil it not the oil company it not are government.its OPEC..when we don't use a lot of oil they bring the price down.if we used alot price goes up.it call pricing for demand.we have got are oil from the middle east for many many years.

The FBI carried out an unprecedented raid at Donald Trump's Mar-a-Lago home in Palm Beach, Florida, on Aug. 8, 2022. Trump released a statement saying the "unannounced raid on my home was not necessary or appropriate." However, Attorney General Merrick Garland said that the Department of Justice requested to the...
PALM BEACH, FL・23 HOURS AGO
CNN

Former President Donald Trump and his lawyers have baselessly peddled a conspiracy theory that the FBI may have "planted" evidence during its raid on Mar-a-Lago because "nobody" was allowed to watch. But Trump's lawyer admitted on Thursday that Trump and his family watched the "whole thing" go down from New York through CCTV footage from the resort.
NEW YORK CITY, NY・1 DAY AGO
Business Insider

Elaine Chao, Trump's former Transportation Secretary, met with the January 6 panel, per CNN. Chao, who is also Mitch McConnell's wife, swiftly resigned the day after the Capitol breach. Chao was reportedly in talks to invoke the 25th amendment to remove Trump from office at the time. Donald Trump's former...
POTUS・1 DAY AGO

While the world was shocked after The Washington Post dropped the bombshell report that the FBI was searching Mar-a-Lago for nuclear weapons documents, some national security experts were also shocked that "signals intelligence" was recovered from Donald Trump's Florida home. "Former senior intelligence officials said in interviews that during the...
POTUS・21 HOURS AGO
Business Insider

"This is not the type of individual I want to be sending out into the community," DC District Court Chief Judge Beryl Howell said.
WASHINGTON, DC・11 MINUTES AGO