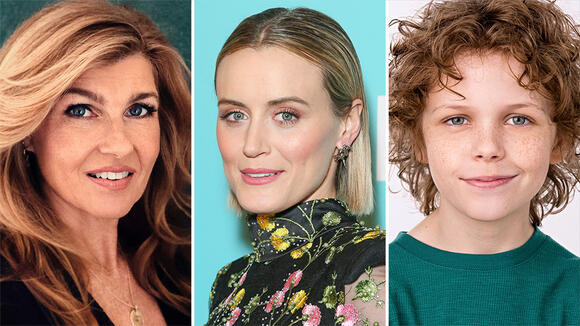 The 10-episode series, based on the novel by Ann Napolitano, reunites former Friday Night Lights showrunner Katims with the acclaimed high school drama’s female lead, Britton. I hear Britton’s Dear Edward deal is for one year, something she also did when she signed on for the first season of Fox’s 9-1-1.

Dear Edward, the first series to come out of Katims’ overall deal with Apple TV+, has been in the works for over a year. Britton was approached early on and came on board last fall though negotiating her deal dragged on for months, holding up the formal series greenlight. As her contract was getting finalized, Orange Is the New Black alumna Schilling and young actor O’Brien were cast as leads.

Dear Edward tells the story of Edward Adler (O’Brien), a 12-year-old boy who survives a devastating commercial plane crash that kills every other passenger on the flight, including his family. As Edward and a diverse ensemble of others affected by the tragedy try to make sense of life after the crash, unexpected friendships, romances and communities are formed.

Schilling plays Edward’s aunt Lacey who takes him in after the crash. Britton plays Lacey’s friend whose husband died in the crash.

The series is described as a heartbreaking, life-affirming, and uplifting story about survival, resilience, connection, and the examination of what makes us human. Hailing from Apple Studios, Dear Edward is written by Katims, who serves as showrunner. He executive produces through True Jack Productions alongside Jeni Mulein. Author Napolitano also serves as executive producer alongside Fisher Stevens ( Palmer ), who is set to direct the first episode and serve as executive producer on the pilot. David Boyd will serve as producing director.

Dear Edward , the novel, is published by The Dial Press.

EXCLUSIVE: Starz is developing The Comedown, a comedic drama series based on Rafael Frumkin’s book by the same name, sources tell Deadline. The project hails from Regina King’s Royal Ties Productions and Freddie Highmore’s Alfresco Pictures as well as TriStar Television, a division of Sony Pictures TV where The Good Doctor star Highmore has had an overall deal. A rep for Starz declined comment. Written by Gretchen Enders (WandaVision), The Comedown is a darkly comedic, multigenerational drama that explores delineating lines of race, class, religion, and time, through the story of two very different Cleveland families – one Black, one...
TEXAS STATE・2 DAYS AGO
Deadline

Filming for Yellowjackets Season 2 has wrapped for the cast in the 90s timeline. Samantha Hanratty, young Misty Quigly, shared the news in an Instagram post. “Last day on set of season 2! Extremely grateful to the incredible crew of @yellowjackets so much hard work went into this season and I can’t wait for you all to see it! Buzz buzz buzz baby,” she shared alongside a photo with a snowy background. In the comments, Warren Kole, who plays Jeff Sadecki, replied saying, “Cast and crew have logged intense work in harsh conditions to put out this show. They have really been...
TEXAS STATE・20 HOURS AGO
Deadline

Thanks, ‘Night Court’! How Multi-Cams Are Having A Moment … Again

Leave it to a sitcom vet like Melissa Rauch to remind the industry that everything old can be new again. After persuading Warner Bros. TV to dust off the Night Court IP and revive it for NBC, multi-cams are suddenly hot again, with every broadcast network — and even a few streamers like Netflix (home to new hit That ’90s Show, which just got renewed) are putting studio audience comedies in development. While no one is straight-up abandoning single-cams — the success of CBS’ Ghosts and ABC’s Abbott Elementary have certainly made sure of that — there’s no beating the...
TENNESSEE STATE・2 DAYS AGO
Deadline

Irene Cara’s Cause Of Death Revealed By Medical Examiner

A Pinellas County, Florida medical examiner’s report indicates that Fame star Irene Cara’s official cause of death was Arteriosclerotic and Hypertensive Cardiovascular Disease. In layperson’s terms, she had a hardening of the arteries and stress on her heart as a result of high blood pressure. Heart disease is the leading cause of death in the United States. The report, received by Deadline, also noted Cara was diabetic. The Oscar-winning singer who died at 63 was best known for the Flashdance theme “What A Feeling” and for playing Coco in Fame and singing that film’s unforgettable title song. Cara got her Oscar for Best Original Song...
PINELLAS COUNTY, FL・2 DAYS AGO
Deadline

Melinda Dillon, a two-time Oscar nominee for Close Encounters of the Third Kind and Absence of Malice who also played Ralphie’s mom in A Christmas Story, has died. She was 83. Her family said she died January 9 in Los Angeles but did not give other details. Dillon probably is best known for playing a mother whose young son is abducted by the aliens in Steven Spielberg’s 1977 epic Close Encounters of the Third Kind. She and Roy (Richard Dreyfuss) inexplicably are drawn to Devils Tower in Wyoming as they struggle to make sense of what has happened to them. She...
LOS ANGELES, CA・2 DAYS AGO
Deadline

Two years ago to this very day, Seth Rudetsky, the Broadway composer, musician, podcaster, host of a show on SiriusXM radio, fundraiser, musical cruise host, conveyer of pop culture trivia and, now, “source music consultant,” received a text from Craig Mazin, the screenwriter, director and producer. Mazin was friends with Ted Griffin, who is married to Sutton Foster, who knows, as does seemingly everybody else in musical theater, Rudetsky. “I get this text,” Sudetsky remembers, “in all capital letters, saying IT’S EMMY AND GOLDEN GLOBE AWARD WINNING CRAIG MAZIN. STOP WHAT YOU’RE DOING. I NEED YOUR HELP.” Specifically, Mazin needed a song...
2 DAYS AGO
Deadline

Charles Kimbrough, best known for his portrayal of network anchorman Jim Dial on the CBS sitcom Murphy Brown, died Jan. 11 in Culver City, Calif. No cause was given by his son, who confirmed the death. Kimbrough received a Tony Award nomination in 1971 for best featured actor in a musical for playing Harry in the original production of Stephen Sondheim’s Company. He later appeared in the Sondheim musical Sunday in the Park With George. He later received a supporting comedy actor Emmy nomination in 1990 for his work on Murphy Brown. A Minnesota native, Kimbrough was also the voice of...
CULVER CITY, CA・6 HOURS AGO
Deadline

EXCLUSIVE: Warner Bros. has acquired the Stephen King bestseller Billy Summers. While in development, the feature project will be produced by J.J. Abrams’ Bad Robot and Leonardo DiCaprio’s Appian Way. If this comes out great, it could be a project for Abrams to direct with DiCaprio playing the title character. Ed Zwick and Marshall Herskovitz are writing the screenplay. This was originally packaged as a ten-episode limited series, shopped around to cable networks and streamers, as we first told you last February, but the decision was made that Billy Summers would work better as a feature. Billy Summers is a...
TEXAS STATE・2 DAYS AGO
Deadline

Sarah Michelle Gellar is talking about how Dolly Parton was a producer on Buffy the Vampire Slayer. During a visit to The Tonight Show starring Jimmy Fallon, Gellar was asked about Parton being an uncredited producer on the show she starred in for seven seasons. “Yes, little known fact, the legend Dolly Parton was a producer,” she said on the NBC late-night show. “We never saw her [but] we’d get Christmas gifts in the beginning that would have our name, and I would think, ‘She doesn’t even know who I am.’ And then one day, someone asked her about it, and she...
TEXAS STATE・22 HOURS AGO
Deadline

Liam Neeson is opening up about if he would make a return to Star Wars or the DC Universe. The Northern Ireland-born actor was part of the prequel Star Wars trilogy where he played Qui-Gon Jinn starting with Star Wars: Episode 1 – The Phantom Menace. With Disney and Disney+ creating a whole universe around those characters, a fan recently asked Neeson if he would “pop up in a spinoff prequel.” “No. Star Wars, no,” he answered the fan during a Men’s Health interview. “As much as I admire them… There’s just so many of them now. So I’ve lost track,...
TEXAS STATE・23 HOURS AGO
Deadline

The controversial Chinese balloon that traversed the United States has been shot down. A live feed on YouTube covered the balloon’s plummet from 60,000 feet. The shoot occurred over the Atlantic Ocean just east of Myrtle Beach, South Carolina, and reports indicate that efforts are being made to recover it for study. A full air ground-stop was in effect in the area until 3:30 pm. ET to facilitate the balloon takedown. Political and public pressure to down the balloon mounted in the last few days, with one Congressman calling for an investigation as to why it was allowed to continue on...
MYRTLE BEACH, SC・1 DAY AGO
Deadline

Viola Davis has joined the coveted circle of those who have won an Emmy, Oscar, Tony and Grammy, picking up the “G” in the “EGOT” title today as part of the pre-telecast for the 65th annual Grammy Awards. Davis earned the Grammy for her audiobook memoir, Finding Me. “It has just been such a journey,” Davis said while accepting the award. “I just EGOT!” Only 18 people have achieved the status, and Davis is the fourth Black person alongside Whoopi Goldberg, John Legend, and Jennifer Hudson to win all four.  Davis already has an Oscar, two Tony’s and an Emmy. “I wrote this...
TEXAS STATE・2 HOURS AGO
Deadline

EXCLUSIVE: When the announcement was made in January that Emma Donoghue had developed a play (with music) of her bestselling novel Room and the acclaimed film that followed – and that the play was heading to Broadway – plenty of New Yorkers were filled with questions (Londoners and Canadians had already seen the show). Some of the answers might be addressed in a new trailer and first-look photo provided exclusively to Deadline. How can a stage play (with music) adapt a tale of such a troubled, harrowing story of domestic abuse, with its downbeat claustrophobia and mental cruelty, translate to...
TEXAS STATE・1 DAY AGO
Deadline

EXCLUSIVE: Italian actress Eleonora Romandini, known in the U.S. for her role as Isabella, a concierge in HBO’s The White Lotus, has signed with Stride Management for representation. Romandini shares a SAG Award nomination for Best Ensemble in a Drama Series for her role as Isabella, the object of hotel manager Valentina’s (Sabrina Impacciatore) affection on Season 2 of The White Lotus, created, written, directed and executive produced by Mike White. A graduate of the 09 Academy in Milan in law, Romandini’s Italian series credits include RAI’s Il paradiso delle Signore and the short film Mythe Dior, directed by Matteo Garrone....
TEXAS STATE・2 DAYS AGO