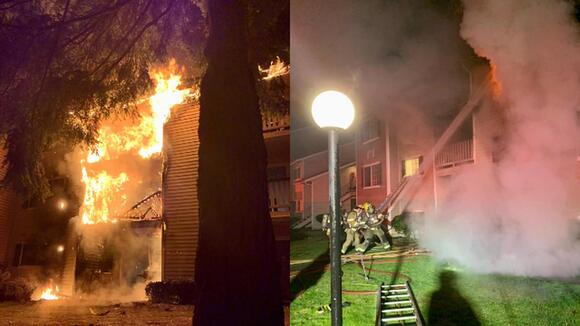 Two people were injured and sent to a local hospital.

The fire has been ruled accidental. Fire investigators said that the fire started in the kitchen in the first-floor unit.

The fire left three units in ruins and nerves on edge.

It is easy to see just how destructive this fire was at the 12-02 on Pearl. Flames consumed three units in the same stack.

“So they banged on the door,” said Eileen Terpstra. “She said fire, ‘get out, get out.’”

That was the moment Terpstra knew that there was a fire at the complex where she has lived for five years.

She said she never heard an alarm, as no smoke filled her unit.

“And we went outside,” said Terpstra. “And there was already tons of fire trucks and everything.”

“I looked out the backdoor, and the whole building was engulfed in flames, all three floors,” said Anthony Passanante, who has lived here for 28 years.

He could clearly see the flames from his unit in the back. He was worried about those who lived there.

“I walk out and this building is thoroughly engulfed,” said Bill McDaniel, a longtime neighbor who recorded this video.

He said the family of four that lived in the unit got out, wearing nothing on their feet. He recalled a man from the family saying he had left something on the stove before seeing flames.

“He probably fell asleep,” said McDaniel. “And it was fully engulfed.”

Now McDaniel, his family and nine of his neighbors must find another place to stay.

McDaniel’s neighbors are now wondering about the consequences if the fire had been worse.

“I mean it still doesn’t make us feel any better knowing it was the kitchen,” said Donicha Harrison, a five-year resident. “I mean kitchen fire because we’re, we’re so close to it.”

This fire has concerned a lot of people around here. The Red Cross is providing shelter to those who need it.

Two people were injured and went to the hospital.

But most are grateful the fire, as bad as it was, wasn’t any worse.

When a fire broke out at a doggie daycare in Seattle’s Lake City neighborhood on Wednesday, workers scrambled to get 115 dogs out of the building.
SEATTLE, WA・1 DAY AGO
KIRO 7 Seattle

Cold winter nights in Western Washington have some people doing whatever they can to stay warm. But one of the owners of Bad Jimmy’s Brewing Co. in Ballard said what appeared to be a warming fire almost cost him his business.
SEATTLE, WA・2 DAYS AGO
KIRO 7 Seattle

Suspect in Wallingford standoff ran inside home, locked out homeowners

The homeowners had stepped outside when a man who was having a mental health crisis ran into their home and barricaded himself inside.
SEATTLE, WA・11 HOURS AGO
KIRO 7 Seattle

The shooting victim was found inside a backyard shed.
GRAHAM, WA・11 HOURS AGO
KIRO 7 Seattle

The King County Sheriff’s Office said there are believed to be three suspects.
WHITE CENTER, WA・15 HOURS AGO
KIRO 7 Seattle

No suspect has been identified.
KENT, WA・1 DAY AGO
KIRO 7 Seattle

Wyatt was shot in the head Jan. 15 while he was driving near North 43rd Street and North Pearl Street. He died days later from his injuries.
TACOMA, WA・1 HOUR AGO
KIRO 7 Seattle

A mangled cat was brought to the Tacoma & Pierce County Humane Society, on Jan. 27, after likely being hit by a car. The 2-year-old cat, now named Bombur, was found limping and barely able to breathe, said the shelter. After arriving, the shelter’s veterinarian found severe injuries. Bombur has a fractured pelvis, dislocated right back leg, and a tear in his abdomen. His internal organs now crowd his lungs and heart, causing shortness of breath.
TACOMA, WA・7 HOURS AGO
KIRO 7 Seattle

Mohamadou Kabba was shot in Renton on January 12, one of three victims in a shooting spree that prosecutors described as “seemingly at random.”
RENTON, WA・4 HOURS AGO
KIRO 7 Seattle

Arrest made in murder of 66-year-old Tacoma woman

Tacoma police are investigating a homicide after a woman was found dead.
TACOMA, WA・1 DAY AGO
KIRO 7 Seattle

BNSF will investigate the collision, while SPD investigates possible criminal aspects of the incident.
SEATTLE, WA・3 HOURS AGO
KIRO 7 Seattle

The 35-year-old suspect was booked into the King County Jail for investigation of drive-by shooting and unlawful possession of a firearm.
SEATTLE, WA・1 DAY AGO
KIRO 7 Seattle

Detectives also believe the four suspects are involved with other robberies and thefts of Kia and Hyundai vehicles.
TACOMA, WA・1 DAY AGO
KIRO 7 Seattle

Renton police dog K9 Odin will be retiring after 8 years of distinguished service, said the Renton Police Department. On Jan. 16, Odin completed his last day of service. “We want to thank him and his handlers, Officer Lane and Officer Moynihan for their outstanding service during their tenure working with K9 Odin,” the Renton Police Department said. Officer Lane was with Odin for two years and Officer Moynihan for six years.
RENTON, WA・6 HOURS AGO
KIRO 7 Seattle

The Tacoma Needle Exchange and the Dave Purchase Project will install a vending machine with free naloxone, known as NARCAN, in the Tacoma Moore Library this February. “The pandemic increased overdose deaths significantly, and public services like the library see patrons struggling with addiction every day,” the library said. The Tacoma Public Library has made NARCAN available to the staff since 2018 and has trained staff to recognize the signs of an overdose and administer naloxone. Their supply is provided by the Tacoma Needle Exchange. Naloxone can be given as a nasal spray or injected into the muscle, under the skin, or into the veins, the National Institute on Drug Abuse’s website said.
TACOMA, WA・6 HOURS AGO
KIRO 7 Seattle

The restaurant’s hours are 7 a.m. to 3 p.m. Wednesday through Friday and 7 a.m. to 5 p.m. on weekends, until further notice.
SEATTLE, WA・1 DAY AGO
KIRO 7 Seattle

SR 507 is blocked in both directions while troopers investigate.
ROY, WA・1 DAY AGO
KIRO 7 Seattle

SPD will request criminal charges be filed in the case.
SEATTLE, WA・1 DAY AGO