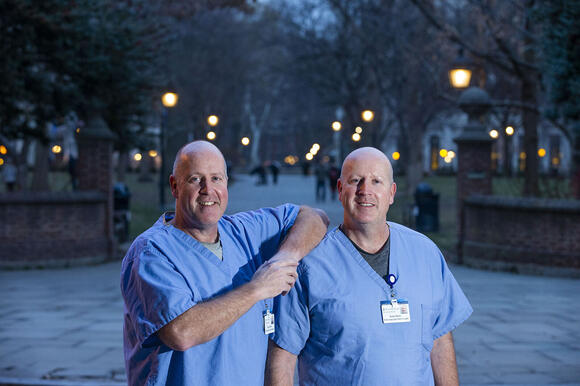 PHILADELPHIA — There’s not a whole lot of mirth in the halls of health care right now. COVID-19 has everybody pretty down, and going for medical tests is never anyone’s idea of a fun time.

Pennsylvania Hospital’s Cardiology Department, however, just might be the exception. On any given day, you’re likely to hear chuckles — perhaps even a guffaw or two — emitting from the offices of this Penn Medicine cardiac diagnostic team.

And then there are the double-takes. Lots of them.

“We’re so used to it, we just laugh it off,” said Bob McKee.

“It’s throughout our lives,” said his brother, Tom McKee.

The Brothers McKee, 55, are identical twins who do identical jobs. For most of the past decade, Bob and Tom have worked together as cardiovascular ultrasound technologists both in the hospital and at nearby outpatient offices.

The opportunities for comic relief abound.

“There are so many stories of people mixing them up,” said J. Shawn Miles, a Penn cardiologist who works with the McKees.

For example, there are repeat patients who come for, say, an echocardiogram, and launch back into a conversation they were having during their last visit with one of the McKees — not knowing there are two of them.

“It’s always funny to see how long it takes before the twin tells them, ‘Hey, that was my brother,’” Miles said. “I’ve had some patients think they’re joking. ‘What do you mean, your brother?’ They’ll walk down the hall, get the brother and bring him in. It cracks me up.” The patients, too.

The doctors have also been known to get them wrong. Then there are the patients having more than one test done. One brother will administer one test, but when the patient gets to the second room, the other brother is there.

“They do a double-take,” Miles said. “’But I just left the room. You were in the other room.’”

“You constantly hear the laughter going on in the hallway,” Miles said. “It does bring some levity, and it does make a stressful situation less stressful.”

The McKees are more than happy to oblige.

“Most of the people who come through are nervous,” said Bob. “We love kidding with the patients, and I think the patients enjoy that. Keep it light.”

And of course, the McKees have had a lifetime to perfect their twinnie gig.

Born and raised in Highland Park, the sons of a homemaker and a career Navy man who ran the Philadelphia Navy Yard’s electric shop, the McKee brothers grew up going to the same schools and playing the same sports: football, basketball, street hockey. When they played baseball for Upper Darby, they were both pitchers.

“We’ve always been best friends, me and Tom, being identical twins,” Bob said.

“We’ve always had a lot of the same interests,” Tom said. “Our personalities are not exactly the same, but we’re laid back. We always got along well.”

That continued as they grew. They were best man at each other’s wedding.

They did, however, allow other people to be their children’s godparents.

“We spread that around,” he added.

For several years, it appeared that the two brothers would pursue different career paths.

After graduating from Monsignor Bonner High School, Tom got his associate’s degree at Delaware County Community College and went to work at the Navy Yard as an insulator on ships.

But he was always interested in health care, like his two older sisters, who are nurses. One of them told him about a technician program at then-Eastern College and Bryn Mawr Hospital.

“I knew I liked technology. I liked working with my hands. I liked math,” Tom said. “I decided to look into the program. I’m glad I did.”

He started working in 1996 at Pennsylvania Cardiology Associates, which was acquired by Pennsylvania Hospital in 2013. He’s been a member of their care team ever since.

Bob decided to go the accounting route after he got his bachelor’s in business from Eastern. It was fine for a while.

“You’re sitting at a desk all day long staring at a computer,” he said. “There’s not a lot of interpersonal interaction. I just got to the point where I said, ‘I don’t want to do this for 25 years.’”

So his twin started telling him about his job.

“Echocardiography, vascular sonography — I had never even heard of it before he got into it,” Bob said. “So I looked into it, and I’ve enjoyed it ever since.”

Over the years, the McKees have enjoyed working together, even when they’re not making people laugh about seeing double.

“It’s nice because you know you have someone who has your back,” said Bob. “I’ve been fortunate to have someone like that, him and some of the other managers in the department. To have that and to be able to lean on them.”

And even though they see each other every day on the job, the twins have remained close outside of work, too. They live about 10 minutes from each other.

They’re hard-pressed to come up with ways they’re different.

“I would say maybe he’s a little quieter than I am,” said Tom.

But they both like cheesesteaks, the Eagles, and the 76ers. At least once a year, they go away together to Bob’s condo in Florida for some brother golf time. And any given weekend, one may pop over to the other’s house to spend an hour or so.

Bob said then it’s his turn to chide back: “’Don’t be jealous. This is my buddy.’”

And buddies they are.

“Me and him have been best friends for life. As you get older, as we all get older, you realize how special that is. With responsibilities, you don’t see your friends as much,” said Bob.

“We have friends in the area that we might see once a year that we went to high school with,” said Tom. “But we see each other a lot more frequently. We’re family.”

Double the pleasure, double the charge. When I was in Jefferson hospital in center city, every Doctor Who I had know idea who they were and why they stopped in to say "hi", billed me and my insurance for a visit. My hospital bill turned out to be $48,000 dollars. Doctors, and hospital's, are scammers.