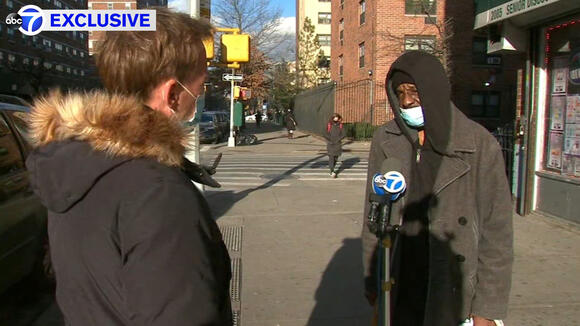 A man who miraculously suffered minor injuries after he was shoved onto the subway tracks in front of an oncoming train is speaking out exclusively to Eyewitness News about his harrowing experience. Rawleigh Thompson couldn't scramble quickly enough to dodge the train completely, but the 62-year-old from Harlem still managed to survive. "I couldn't believe that I was still alive," he said. "I couldn't believe it. I still don't believe it." Thompson said he was heading to church on Sunday morning when a man pushed him from behind onto the southbound tracks at the Fulton Street Station. RELATED | MTA officials address alarming rise in crime, promise more uniformed officers on platforms

As the train approached, he scrambled as close to the platform as he could to get out of the way. "And then, pow, pow, hit me twice," he said. "And I think, 'Oh my God' and turned my head to the side." The train struck his leg, but luckily, it didn't break any bones. Still, he said he's in a lot of pain and walking with a cane. By the time he crawled out of the tracks, the man who pushed him was gone. The NYPD released surveillance video of the suspect as he was going up the escalator to leave the station. The incident happened one week after a women was pushed onto the tracks in Times Square and killed , prompting many city officials, including Manhattan Borough President Mark Levine, to call for platform barriers in at least some of the city's subway stations. RELATED | Tips to stay safe on New York City subway platforms

Whether that happens or not, Thompson is urging people to pay close attention when standing by the platform. "I'm hurting, man," he said. "I'm hurting real bad." Meanwhile, police are urging anyone who recognizes the suspect to call CrimeStoppers at 1-800-577-TIPS. ---------- DO YOU NEED A STORY INVESTIGATED? Dan Krauth and the 7 On Your Side Investigates team at Eyewitness News want to hear from you! Call our confidential tip line 1-877-TIP-NEWS (847-6397) or fill out the form BELOW. You can also contact Dan Krauth directly: Email your questions, issues, or story ideas to 7OnYourSideDan@abc.com Facebook: DanKrauthReports Twitter: @ DanKrauthABC7 Instagram: @DanKrauth

Yes… you were on your way to church……. When that devil attacked you and Jesus Christ saved you… just say Thank you lord

thank God you survived...please be careful 🙏 in the train station there is an Epedemic of Nutts trying to take over ...

Rachel Nugent, 14, was last seen leaving her residence located at 551 Old Dock Road in Kings Park at approximately 6:45 a.m. Investigators believe she may have taken a train to New York City and may have traveled out of state.
SUFFOLK COUNTY, NY・14 HOURS AGO
ABCNY

Video shows the man throwing traffic cones at the vendors cart and yelling at him.
NEW YORK CITY, NY・18 HOURS AGO
ABCNY

Authorities say it started as some sort of collision involving a jet ski.
MANHATTAN, NY・6 HOURS AGO
ABCNY

A man died after he collapsed at the finish line of the Brooklyn Half Marathon Saturday.
BROOKLYN, NY・12 HOURS AGO

The employees' scaffolding suddenly stopped moving and got stuck. It happened Friday just after 8 a.m. at 712 Fifth Avenue in Manhattan.
MANHATTAN, NY・1 DAY AGO
ABCNY

Police in Long Branch, New Jersey imposed a 9 p.m. curfew after a crowd got out of hand at Pier Village.
LONG BRANCH, NJ・6 HOURS AGO
ABCNY

The pain is piercing to know that her 11-year-old daughter, Kyhara was another victim of gun violence.
BRONX, NY・6 HOURS AGO
ABCNY

Detectives have identified a 14-year-old person of interest they are looking to question in the fatal shooting of 11-year-old Kyahara Tay.
BRONX, NY・1 DAY AGO

A puppy that was snatched from a pet store in New Jersey has been returned unharmed.
MIDDLETOWN, NJ・6 HOURS AGO
ABCNY

The BMW was southbound when the driver lost control and careened into the northbound lanes just after 11:45 p.m. Wednesday.
BRONX, NY・2 DAYS AGO
ABCNY

A 20-year-old was shot in face and killed after meeting with alleged motorcycle sellers under the Deegan Expressway.
BRONX, NY・3 DAYS AGO

Two people were found dead in a burning car in the Bronx were both fatally shot, and a double murder investigation is now underway.
BRONX, NY・3 DAYS AGO
ABCNY

Graphic video shows three suspects attacking two men, lifting one up and slamming him onto the ground.
MANHATTAN, NY・3 DAYS AGO
ABCNY

The girl, an innocent bystander who was a half block away when the gunfire erupted, is identified as 11-year-old Kyhara Tay of the Bronx.
BRONX, NY・4 DAYS AGO
ABCNY

The owners of a pet shop in New Jersey are offering a $1,000 reward for the return of a stolen puppy.
PUBLIC SAFETY・1 DAY AGO

Authorities say a suspect in a stolen Honda CRV struck an occupied police vehicle that was pulled over on the side of the road before colliding with another vehicle and hitting several pedestrians.
PATERSON, NJ・2 DAYS AGO
ABCNY

Transport Workers Union Local 100 officials said bus operators are tired of being treated like punching bags, and they detailed the changes they want during the event outside the Kingsbridge Bus Depot in Inwood.
NEW YORK CITY, NY・3 DAYS AGO
ABCNY

In the most recent attack, a 51-year-old thought her life was over, but the thieves took her jewelry -- $7,000-worth before letting her go.
QUEENS, NY・1 DAY AGO