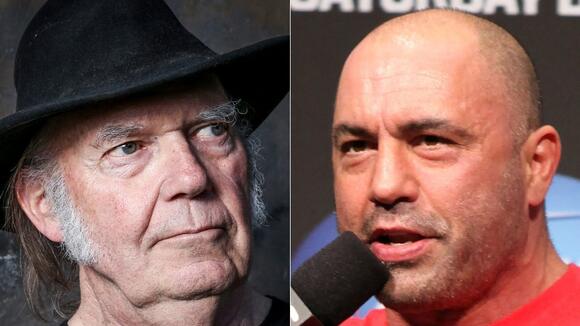 Neil Young is knocking Spotify after it sided with Joe Rogan and pulled his music from their service after he gave it an ultimatum on coronavirus misinformation, saying he sounds "better everywhere else" anyway.

"I have never been in favor of censorship,” the “Rockin’ in the Free World” songwriter said in a statement posted Friday on his website.

“Private companies have the right to choose what they profit from, just as I can choose not to have my music support a platform that disseminates harmful information,” the 76-year-old musician added.

Young’s words mark his first public comments in what’s become a weeklong saga, since Spotify said Wednesday it was in the process of removing his songs following an ultimatum over what he called “fake information” regarding COVID-19 vaccines.

“I want you to let Spotify know immediately TODAY that I want all my music off their platform. They can have [Joe] Rogan or Young. Not both,” Young wrote in a letter earlier this week to his record label and management team.

“I am doing this because Spotify is spreading fake information about vaccines — potentially causing death to those who believe the disinformation being spread by them," Young said of comments made by the controversial podcast host on his show streamed by Spotify, “The Joe Rogan Experience.”

A Spotify spokesperson said in a Wednesday statement that the company had a responsibility to balance “both safety for listeners and freedom for creators.”

“We have detailed content policies in place and we’ve removed over 20,000 podcast episodes related to COVID-19 since the start of the pandemic,” the statement said. “We regret Neil’s decision to remove his music from Spotify, but hope to welcome him back soon.”

In his Friday statement, Young said he is “happy and proud to stand in solidarity with the front line health care workers who risk their lives every day to help others.”

“I support free speech,” Young said, adding, “As an unexpected bonus, I sound better everywhere else.”

Gene Simmons of Kiss and several other musicians are beginning to react to the news of Elon Musk’s purchase of Twitter for $44 billion, questioning Musk’s desire for more “free speech” and how it may impact the spread of more hate and misinformation. “Fantastic news, at...
BUSINESS・28 DAYS AGO
Fox News

Co-host of “Outnumbered” and former White House Press Secretary Kayleigh McEnany joins Fox Across America With Jimmy Failla to share her thoughts on the hysteria by some Democrats and members of the mainstream media over Tesla CEO Elon Musk acquiring Twitter. “They don’t they don’t fear Twitter becoming...
INTERNET・28 DAYS AGO
The Independent

Mark Hamill has revealed he lost thousands of followers on Twitter in the space of a few hours yesterday (25 April).While the exact reason for the exodus has not been confirmed, his tweet came shortly after it was announced that Elon Musk is set to purchase the social media platform in a deal worth $44bn.Since the news broke, many users of the site (including Jameela Jamil) have announced their intention to delete their accounts, owing to Musk’s reputation as a politically controversial figure. It is believed this could be the reason for Hamill’s loss in followers.“Weird. I just lost...
CELEBRITIES・28 DAYS AGO
Newsweek

While Pratt has never publicly expressed his views on sexuality, his links to a church that has been accused of supporting conversion therapy and being anti-LGBTQ have made him a target for online criticism.
MOVIES・29 DAYS AGO

Ice Cube returned from a trip to Morrison, Colorado last week where he performed at the historic Red Rocks Amphitheater alongside Cypress Hill, E-40 and Too $hort for the annual 420 on the Rocks show. Now presumably back at home in Los Angeles, the N.W.A legend has turned his attention...
MORRISON, CO・29 DAYS AGO
TheWrap

In a surprise to no one, Kimmel devoted much of his opening monologue on Monday’s “Jimmy Kimmel Live!” to roasting Marjorie Taylor Greene after the far-right congresswoman testified last week in a Georgia court about her role in the Jan. 6 Capitol riot. Kimmel — who was...
WASHINGTON, DC・28 DAYS AGO
Ultimate Classic Rock

Randy Rand, founding bassist for the ‘80s hair metal group Autograph, has died. The rocker’s passing was confirmed in a post to Autograph’s social media pages. “It is with great sorrow and heavy hearts to announce the unexpected passing of our cherished friend and founding member of Autograph, Randy Rand,” the band’s message read. “Although beyond devastated, we find some comfort and solace knowing the last couple of years have been some of his happiest as an artist and as a performer. Randy was the consummate optimist and was so excited to see the new direction, creativity and renewed energy with the band. You could feel his excitement- as it was quite palpable with his playing abilities, performances and the way he interacted with his beloved fans.”
MUSIC・28 DAYS AGO
Entrepreneur