Democratic Rep. Frank Mrvan of Indiana said he was worth millions. He was wrong. 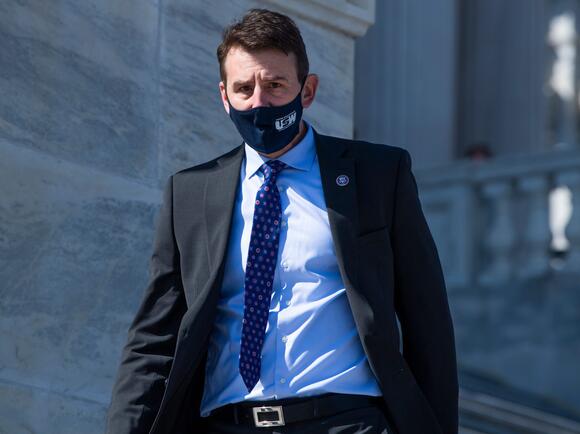 Freshman Rep. Frank Mrvan declared in a congressional financial disclosure that he was personally worth tens of millions of dollars.

In actuality, he's closer to broke.

Mrvan, a Democrat who represents Indiana's 1st Congressional District, last year reported in an annual financial disclosure that he owned a public employee retirement fund annuity worth "over $50 million."

When Insider asked Mrvan about this asset, the congressman acknowledged he made a mistake that led to him vastly inflating his total wealth.

Insider calculated Mrvan's new net worth to be at least $100,000 in the red after subtracting his liabilities from his total reported assets.

"I am responsible for the actions of my office, and I take sole responsibility for the honest data entry error on my financial disclosure form," Mrvan told Insider. "The public employee retirement fund amount should have been in the thousands and not millions. When brought to my attention, I corrected the form and resubmitted it to the House where it will again be made publicly available."

Mrvan declined to say who, specifically, was responsible for the error and how months passed without him, or anyone on his staff, noticing it. He did not respond to a question about how he plans to avoid such a mistake in the future.

Members of Congress are required each year to submit an updated financial disclosure of their family's personal assets, liabilities, and other finances as mandated by federal law, including the Stop Trading on Congressional Knowledge Act of 2012. The purpose: to foster public trust through transparency, curb insider trading, and defend against potential financial conflicts of interest.

Insider's recent "Conflicted Congress" investigation , which delved into each member of Congress' financial disclosures, discovered that at least 54 members of Congress have recently violated the STOCK Act. But congressional financial disclosures are not always rigorously reviewed for accuracy by government officials and are not subject to independent audits.

Mrvan originally appeared in an analysis of the 25 wealthiest members of Congress , published as part of "Conflicted Congress." Insider has now removed him from the list.

Delaney Marsco , the senior legal counsel for ethics at the Campaign Legal Center, told Insider that some of the blame for the disclosure also lies with the House Committee on Ethics, which does not comment publicly on specific House member financial filings.

"The Committee on Ethics is supposed to review all of the financial disclosures to make sure they're timely and accurate and complete," she said.

Given how wealthy many members of Congress are, Marsco said it's not surprising that the mistake went unseen by the committee as the large asset value may not have stood out to reviewers.

Still, she said, the error is partially related to the committee's reliance on a "disclosure-only model," where the committee must fully trust the veracity of each disclosure.

Marsco also noted that Mrvan's mistake could have been avoided if congressional disclosures were, in general, structured differently: She suggested removing the requirement to file asset values in broad ranges, instead providing a more precise value for each asset.

"There's definitely logical reasons why we have ranges, but I wonder if this could have been averted if he had been required to say the exact amount of the asset," Marsco said. "It's a lot harder to misplace the zero if you're rounding to the nearest tenth of a cent."

Democrats face a tough choice to confirm judges in red states: Work with GOP senators or defy them

For Democrats to make good on Biden's promise to restore balance to the courts, experts say they must place judges in red states.
INDIANA STATE・14 HOURS AGO
TheDailyBeast

MAGA-boosting radio host John Fredericks has turned on Donald Trump, telling the former president in no uncertain terms on Tuesday that “nobody cares” about his petty media feuds and “grievances” anymore.Fredericks, a longtime supporter of the twice-impeached ex-president, largely took issue with how Trump has seemingly ignored political issues while focusing his attention on far-fetched lawsuits and complaints about “fake news.” Additionally, Fredericks grumbled about Trump privately backing Ronna McDaniel in her successful re-election bid for Republican National Committee chair.“President Trump is going to do what he wants,” Fredericks declared in a clip first flagged by Raw Story. “I think...
15 HOURS AGO
Matthew C. Woodruff

Almost 30,000 people have signed a petition calling for evangelical pastor Franklin Graham to be fired for his support of former President Trump following the deadly Capitol riot. The petition was drawn up by the Christian organization Faith America, which criticizes Graham’s “idolatry” of the former president.
2 DAYS AGO
The Hill

There has been substantial media coverage of President Biden and former Vice President Pence both removing marked classified documents outside the White House after they left the vice presidency (and, in the case of Biden, also including after he was a U.S. senator). Both insist they did so inadvertently.   Of course, the word “inadvertent” does not apply to former President Trump’s behavior. As we now know from Mr. Trump’s own admission, he knew documents he took to Mar-a-Lago were classified…
WASHINGTON STATE・1 DAY AGO
Business Insider

Trump does have multiple lawyers representing him in at least a dozen cases, though it is unclear if he has more attorneys than Capone.
GEORGIA STATE・23 HOURS AGO
Business Insider

This help line is a growing effort to give Ukraine vital advice on repairs and maintenance as it pushes weapons to their limits.
WASHINGTON STATE・1 DAY AGO
MsBirgith

A recent NBC poll revealed that 71% of Americans believe the country is headed in the wrong direction. This is a significant increase from previous polls and suggests a growing sense of unease among the American public.
1 DAY AGO
Business Insider

"He is obsessed with retaking Ukraine," former Secretary Gates said of Putin, who launched the war in Ukraine last February. "He will hang in there."
2 DAYS AGO
Business Insider

Last week, lawmakers offered amendments to legislation on the House floor for the first time since May 2016. Democrats say they're into it.
CALIFORNIA STATE・7 HOURS AGO
Business Insider

"There's been this attack on law enforcement, and you're not getting the best of the best," Jordan said of the state of many police departments.
MEMPHIS, TN・2 DAYS AGO
Reuters

LONDON, Jan 30 (Reuters) - Russia told the United States on Monday that the last remaining pillar of bilateral nuclear arms control could expire in 2026 without a replacement due to what it said were U.S. efforts to inflict "strategic defeat" on Moscow in Ukraine.
WASHINGTON STATE・1 DAY AGO
Newsweek

"There is no other way to talk to these fools," State Duma member and former military commander Andrey Gurulyov said.
1 DAY AGO
Business Insider

McKay Coppins, a journalist at The Atlantic, said he was "taken aback" by how often he heard MAGA Republicans say they wish Trump was dead.
MICHIGAN STATE・4 HOURS AGO
Business Insider

The good news for the former president is that, for now, the rest of the 2024 GOP field remains frozen.
IOWA STATE・12 HOURS AGO
Business Insider

"So somehow, the only people who are not allowed to know what was in there are congressional oversight committees," Rubio said.
FLORIDA STATE・2 DAYS AGO
Business Insider

"This will be a dog's fight, beginning to end," an ex-Manhattan investigations chief predicts of the looming contest between Trump and prosecutors.
MANHATTAN, NY・1 DAY AGO
Business Insider

Trump brushes off polls showing Ron DeSantis ahead of him in critical states ahead of 2024: 'He won't be leading, I got him elected'

While former President Trump has led in most national polls for the GOP presidential nomination, Gov. DeSantis has taken polling leads in key states.
FLORIDA STATE・2 DAYS AGO
Business Insider

Elizabeth Warren says Biden could use other tools to carry out student-loan forgiveness if the Supreme Court strikes it down, but 'now is not the time to talk about Plan B'

"If the Supreme Court applies the law as it is written, then that cancellation will go through," Sen. Warren said of student-debt relief.
MASSACHUSETTS STATE・1 DAY AGO