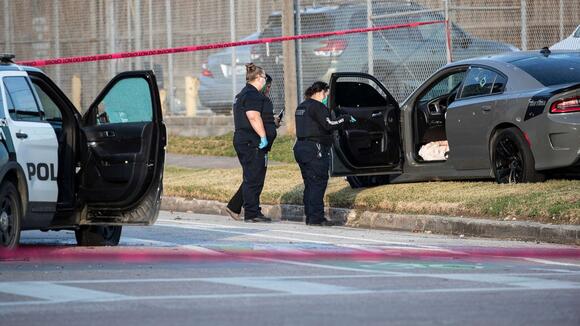 Three Houston police officers were shot on Thursday after a fleeing suspect crashed his car, evaded a shootout with officers, carjacked another driver at gunpoint and then barricaded himself in a home.

He was taken into custody later that evening. ABC News has gathered video that shows the most dramatic two minutes of the chase, which began at 2:42 p.m. local time when officers responded to a domestic call.

Approximately 26 minutes later, the suspect hurtles into the frame of the first video we have, when the gray car he's driving skids through the intersection of McGowen Street and Hutchins Street at 3:09 p.m. and crashes. He's closely followed by Houston officers. A shootout ensues.

As the shootout begins, Ben Simon comes toward a window and starts recording. His video shows the suspect feeling the site of the crash, up Hutchins Street.

At 3:10 p.m., he's seen encountering a white Mercedes, at which point he forces the driver out of the car at gunpoint while still exchanging fire with the police. Carolina Garcia-Garcia filming from her window caught the whole thing -- approximately 26 seconds.

"I heard the gunshots down the street," she told ABC News. "I popped my head through my balcony and saw the police SUVs in the McGowen intersection and then more gunshots, so I went back inside and ducked. I looked out a different window and saw that guy running and looking back and shooting at police."

After driving off, the suspect headed toward a house about 3.5 miles northeast on Lockwood Drive in the Greater Firth Ward. Law enforcement officers barricaded him in, and at he was arrested at approximately 7:45 p.m.